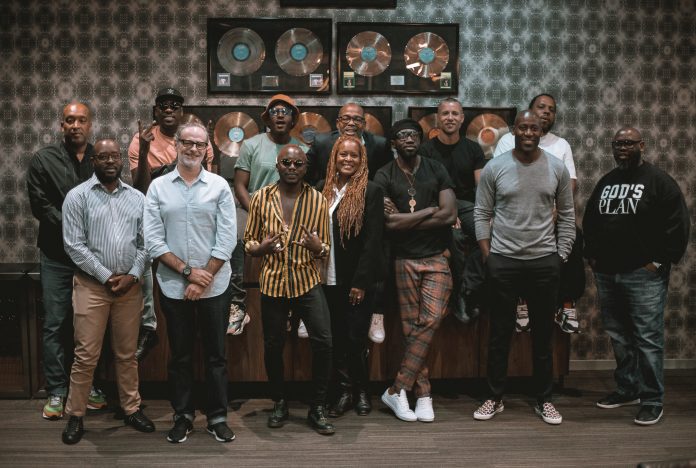 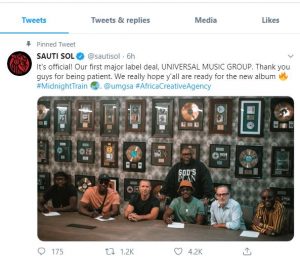 Sauti Sol’s new recording deal with UMG will globalise the sales of their works – through the music group’s operations in more than 60 countries worldwide. A member of the group, Bien-Aimé Baraza said: “I love new beginnings. I have waited for this day for all my life. I can’t wait to share love, music and be back on the road. The year off has really been a steep learning curve. But I couldn’t think of a better way to come back than this album. @sautisol fans are about to have a blast. I LOVE YOU ALL ❤ #MIDNIGHTRAIN.”

The Kenyan afro-pop band released their debut studio album Mwanzo in November 2008, to critical acclaim across the continent. They followed this up with a second album, Sol Filosofia, released in February 2011, earning the group multiple award nominations and accolades. Their third studio album, Live and Die in Afrika, was released in November 2015 as an early Christmas present to their fans, allowing a 48-hour window for free download. The band has received both local and international accolades and nominations, including the Kisima Music Awards, the Channel O Music Video Awards, the MTV Europe Music Awards, and the BET Awards.

Sauti Sol joins a number of African music stars who have bagged international recording deals including label mate, Tiwa Savage, who signed with UMG in May 2019. No doubt, there has been newfound global love for African music and talents, which has seen a number of international labels set up shop within the continent. In March 2019, Warner Music Group signed an innovative deal with Nigeria’s Chocolate City, and not forgetting Sony Music’s RCA Records deal with Wizkid in March 2017 and Davido in January 2016.

It’s only going to get better!