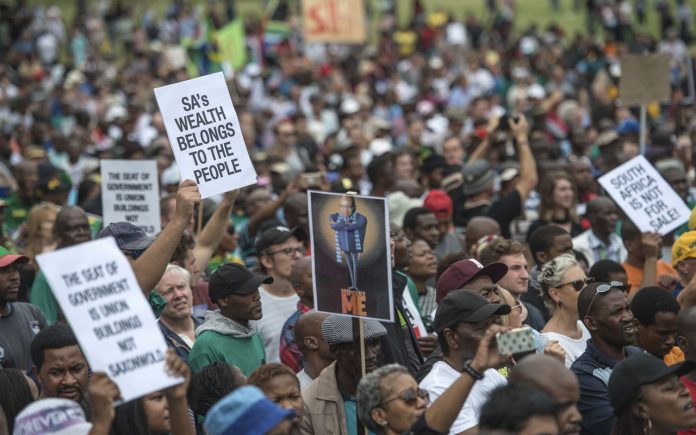 The year 2020 has always carried a mark of augury. Every number or year seems to have its own meaning anyway. But it only throws the accuracy of numerology into further doubt or as a mere wishful thinking (that’s necessary for our common survival) when numbers that augur good tidings seem to usher in the darkest, unimaginable opposite. For the African continent 2020 has, at least, been a very decisive or indecisive moment in the annals of our shared history. It is a year of the possible or the impossible. A year that gives us the Arab Spring vibes, especially as countries that are characteristically tight-lipped have now unleashed their fists in the air.

Elsewhere in the world, there have been protests and even counter protests. But protests or public demonstrations have always been a theoretical feature, a theatrical showpiece, even, of any Hellenistic democracy. According to The Economist, which monitors and ranks democracies in the world, we have about 167 democratic countries. But it remains another question of how democratic they are, or how high they score on the index. But one thing is clear, the protests this year have swept simultaneously with the Covid-19 contagion, with the same intensity. And the scoresheet performance on the index has never discriminated against any country in terms of its people deciding to speak up.

Although South Africa is regarded as the protest capital of the world, it overclocked an astounding figure even for its own standard. During the lockdown period between March 27 and July 31, a total of 511 protests were recorded. This was double the amount of protest prior to the lockdown and the year 2020. Of course, it is a strong hypothesis that the Covid-19 and the financial hardship it foisted on the populace thinned out their endurance threshold; but there seems to be an unaccounted series of rationale behind their fervor and popularity. So what has changed? What is so different about this year? In this article, we shall be considering the historical context of protests, the current reality and interconnection and the future of protest in Africa and tangentially elsewhere in the world.

It is noteworthy to state that early African nations states were ruled by absolute monarchy or faux theocracy. Thus, there was no room for public dissent. Any protest was just impossible. Based on few historical records, the only protests were political protests which were often spearheaded by secessionists and often spiraled into internecine wars. Even when the European powers came to colonise, most demonstrations were mostly against work conditions. The first ever recorded organised protest on the African continent was the Lagos strike of 1897. Although it was a labour strike organised by the workers in the Public Works Department against the administration of Governor Henry McCallum, it was a watershed moment in colonial Africa. In a way, colonial rule itself prepared the African continent for a culture of protest, despite its initial grip on them. And you can only cage people for a short time.

It was a matter of administrative convenience for the colonial governments to equip their subjects with a sufficient education. This educational exposure emboldened our early nationalists to fight for the greatest protest of the black race: the fight for self actualisation. But protest in itself is a basic human instinct. It can never be diminished by lack of sophisticated education or structure or leadership. In fact, the success of most protests that swept the world such as the 2020 Hong Kong and Lagos protests were due to a lack of these things. It’s an old tactic in warfare to eliminate the shepherd in order to dis-organise the flock.

Another notable protest after the 1897 Lagos strike was in 1926 in Sierra Leone – another labour strike. The protest lasted for six weeks and resulted in mass arrest and dismissal of top guys in the Railway Department. It was not until the cusp of the postcolonial era that people began to rally around for mass, civic protest that is not motivated by labour interests or any other group interest. Of course, the youth are always the lifeblood of any country. With the establishment of universities in the former colonies came a rallying point for vibrant voices to amplify the muted voices of the common man.

Students’ bodies have had a great impact on the global political situation. They have the advantage of impatience, a lather of zeal, energy and optimism; and have been the pilot of the South African anti-apartheid movement in South Africa. Even long after the final dissolution of the apartheid regime, the culture of protest has intensified. This is because of the leftovers of this unfair system. There are still many systemic social dysfunctions, poverty, high employment rates, and low standard of living today as there was in the past. To quote the words of the Nobel Laureate, Wole Soyinka (a chronic protester in his own youth), the incantation has died but the spell remains. In the 2010s, this same spell swept through much of Northern Africa and parts of Asia which led to the recorded deaths of 61,080–140,000 in total, now called the Arab Spring. And what did it take?

On December 17, 2010, Tarek el-Tayeb Mohamed Bouazizi lit a match and self-immolated in Egypt. While the rationale was disproportionate to the big act of self burning itself, the fire simply raged about and matched the intensity of pent up anger against government establishments and their dictatorship. The match simply woke up the people who had been euthanised by years of government misrule and unrealistic hope. Protest was the only practical hope and act. We can go about the history of protests in Africa to no end, but what is clear is that you cannot underestimate the power of youth.

See Also: Infants go for as low as $300 in the slums of Kenya | Y! Africa Weekend Best Reads

History always repeats itself. Since the end of the colonial period, power has changed hands, but the reality is that people are still unsatisfied by the series of poor leaderships. The strategy of protests has also become diversified and more sophisticated. There is an added advantage of social media reach and the disadvantage of the inflexibility of the older generations to adapt. While they have the political power to continue with their tactics of blackmailing and power grabbing, the younger generation has found power in the anonymity and the reach of the social media.

There are online forms to rally for petitions against bad rulers and this was well utilised during most of the protests this year. Social media space is a mediator and level playing ground for the protesters and the objects of protests. While the state has the power of propaganda and strong arming the traditional mass media, social media has democratised the space of governance. And for as long as the basic kick instinct remains in men and women, and for as long as the governments of African countries fail to perform their responsibilities satisfactorily, 2020 might just be the tip of the iceberg.