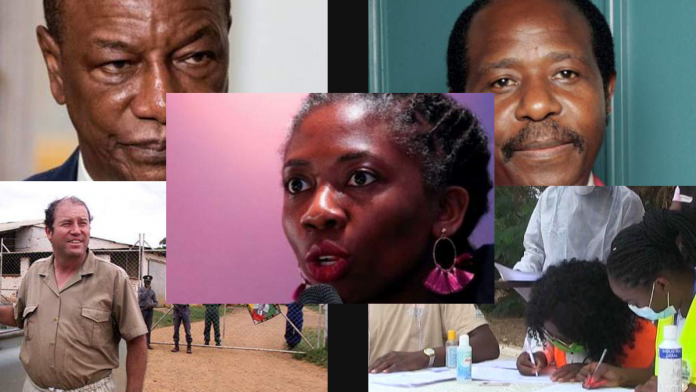 The President of Guinea, Alpha Condé, has accepted his party’s nomination to seek a controversial third term.

Mr Condé, who was first elected in 2010, pushed through a constitutional change in a referendum in March which allowed him to stand for a third term.

The vote was boycotted by the opposition and sparked mass protests.

In early August Guinea’s ruling party nominated the 82-year-old president to represent it in the elections in October, but at the time he made no formal response.

His efforts to stay in power have raised concerns Guinea will go the way of some other African countries whose rulers have refused to step down after their mandates expired.

Zimbabwe’s white farmers to apply to get their land back

The Zimbabwean government has said that white farmers whose tracts of land were seized between 2000 and 2001 under a government programme of land reform can apply to get them back.

Where the land cannot be given back, the farmers will be offered land elsewhere, according to a joint statement by Finance Minister Mthuli Ncube and Lands and Agriculture Minister Anxious Masuka.

The ministers said the government would revoke offer letters to black farmers who were resettled in the land.

They said the white farmers whose land was to be seized by government but is yet to be taken can can apply to lease the land for 99 years.

Some 3,500 white farmers were evicted from their farms during the controversial land reforms.

Zimbabwe’s government agreed in May to pay $3.5bn (£2.6bn) in compensation to white farmers whose land was taken during the land reforms.

A French right-wing magazine has been criticised across the political spectrum in France for depicting Gabon-born socialist MP, Danièle Obono, as a slave.

The article in Valeurs actuelles accused Africans of colluding in slavery, and had a sketch of Ms Obono with an iron collar around her neck.

Prime Minister Jean Castex said it was a “revolting publication”.

The magazine apologised to Ms Obono but denied the article was racist.

Ms Obono is a deputy in the National Assembly for left-wing party France Unbowed, led by Jean-Luc Mélenchon. She represents a Paris constituency.

She tweeted the image with the words “the far right – odious, stupid and cruel”.

The man whose role in saving people from the 1994 genocide was celebrated in the film Hotel Rwanda is being held in Rwanda on terror charges.

Paul Rusesabagina was arrested abroad, where he had been living in exile. The Rwanda Investigation Bureau says he was arrested on an international warrant for forming and leading “terrorist movements” operating in the region.

Mr Rusesabagina, 66, was awarded the US Presidential Medal of Freedom in 2005, among other human rights awards.

He has not commented on the current charges but has long been a critic of the Rwandan government.

In 2011, he was accused of funding subversion in Rwanda, but no charges were brought.

At the time, Mr Rusesabagina denied the accusation and said there was a smear campaign against him.

The 2004 film Hotel Rwanda told the story of how Mr Rusesabagina, a middle-class Hutu married to a Tutsi, used his influence – and bribes – to convince military officials to secure a safe escape for the estimated 1,200 people who sought shelter at the Mille Collines Hotel in Kigali.

Rwandan genocide survivors’ group Ibuka has in the past said that he exaggerated his own role in helping hotel refugees escape the 100-day slaughter in 1994.

Angola is perhaps one of countries best coping with coronavirus pandemic in sub-Saharan Africa.

Of recent, authorities organised a ceremony to sign an online contract with the Chinese company, BGI Group of Shenzhen organised last Thursday a to reinforce the detection capacity of COVID-19 in the country. It is believed taxi drivers are most exposed to virus.

Five laboratories will be built with a daily capacity of 6,000 tests.

A state of emergency imposed by the government in early July to curb the spread of Covid-19 was later replaced by a state of calamity.