Y! For Africa Focused on Emerging Leaders and Culture Shapers
Home Blog A Chinese province is taking anti-racism measures and we hope it works out 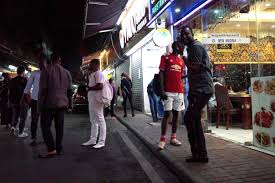 Officials in China’s Guangdong province have announced new measures aimed at putting an end to racial discrimination – a storm that has threatened Beijing’s relationship with African governments and Africans globally.

Background: African residents have received harsh treatments in the province’s capital, Guangzhou. In April, videos and images of Africans being evicted from their apartments, forced into quarantine, blocked from hotels and even being barred from a local McDonald’s went viral on social media platforms including Twitter, Facebook and WhatsApp.

This anti-foreigner disposition came to be after a group of African men reportedly broke quarantine and infected others with the coronavirus.

After the storm started: African governments including Ghana, Kenya, Nigeria and Uganda summoned China’s ambassadors, along with the African Union Commission, to register their displeasure over the reports. The US State Department also ramped up the scrutiny of happenings in Guangzhou with a warning to African Americans to avoid travel to the city. The response from Beijing had initially been to deny the reports; describing them as “rumours” and “misunderstandings” spread by Western media, despite the fact that local media in African countries were the first to report on the issue. However, with the new measures, China is effectively admitting there is a problem and clearly hoping to repair damage to its relationships with African countries..

What’s the deal now? A release published Monday, on the website of Chinese Embassy in Nigeria—relaying a message from Guangdong province officials – reads, “We firmly oppose any discriminatory practice against specific individual or group, and allow zero tolerance for discriminatory remarks and deeds.” It also said the province was implementing “measures on ensuring equal services in nine sectors.”

The measures target businesses such as hotels, shopping malls, restaurants and other places where Africans have been routinely turned away, as well as residential compounds. Education, public transport and medical service providers are also included in the new regulations.

“Any organisation or individual shall not restrict or refuse providing hotel accommodation and renting houses to any specific group of people because of their nationality, race, gender or skin color. Nor should they be denied free access to such public venues as local communities, shops and parks,” one of the new measures included in the statement read.

A dedicated hotline has also been set up for foreign nationals who have concerns.