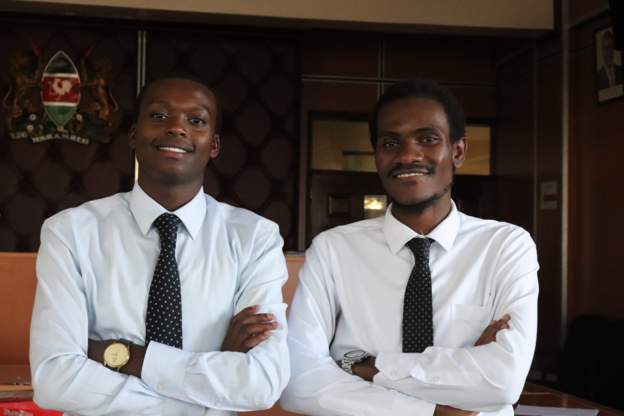 In the semi-finals of a competition for aspiring lawyers, Kenyatta University, Kenya triumphed over Oxford University, UK.
As one of the most distinguished universities in the world, Oxford were the defending champions in the Nelson Mandela World Human Rights Moot Court Competition. The competition, which brings students from around the globe to argue and defend hypothetical human rights cases, was held virtually this year for the first time.
The winning champions were Kenyatta University’s third year and second-year students – Sydney Tambasi Netya and Martin Kioko Munyoto respectively, who are both studying law.
“We went into this competition with the determination to elevate the voice against violation of human rights, and to that extent, we are proud of achieving this level of success,” Mr Netya said.

Simultaneously, Kenya’s Strathmore University victory over Bolivia’s Universidad Catolica set the stage for an all-Kenyan final for the first time in the competition’s history. All four students who would be going through to the finals are all below the age of 23.
Their victory makes it the first time since 2009, that an African team – two from Kenya in this case – has made it to the finals of the competition.

A bill to revoke the Electoral Act and pass into law the Independent Electoral Commission Bill, 2020 on Tuesday passed its second reading in the House of Representatives. Rep. Aishattu Dukku (APC – Gombe) served as the main supporter for the bill, which was proposed to regulate the Federal, State and Area Councils Elections and other related matters.
During the debate, Dukku argued that the Bill sought to make provisions for restrictions and qualifications for elective officers in the Constitution of the Federal Republic of Nigeria, 1999.
The Bill, if passed to law, will provide legal precedence to the use of card readers and other technological devices during general elections and party primaries, as well as provide a timeline for the submission of lists of candidates and criteria for replacements of candidates. According to Dukku, the Electoral Act Amendment will also address limits of campaign expenses and the omission of names of candidates or logo of political parties.
“This amendment has become necessary because of the flaws observed in our electoral system. It would ensure that all elections in the future are free, fair and credible,” she said.
The Minority Leader of the House, Rep. Ndudi Elumelu (PDP –Delta) also noted that a section should be added to the Bill to ensure that the amount of money required for picking a form and contesting for elections are reduced to make room for everyone to participate.
Rep. Babajide Benson (APC – Lagos) also drew the attention of the house to a section that said where the number of votes cast exceeds accredited voters; election MIGHT be cancelled and rescheduled for another date. He posed that the word “may” be replaced with “shall” to ensure that nobody is deprived using this clause as backing.
The speaker of the house, Rep. Femi Gbajabiamila in his ruling, referred the Bill to the Committee on INEC and Political Party Matters for further legislative actions.

UN LAUNCHES 16-DAYS ACTIVISM MOVEMENT FOR NO VIOLENCE AGAINST WOMEN AND CHILDREN.

On Wednesday, 25th of November 2020 – the International Day for the Elimination of Violence Against Women, the United Nations marked the beginning of 16 Days of Activism Against Gender-Based Violence.

For this cause, nations, individuals, civil society, grassroots organizations, UN agencies, and governments will come together to demand accountability for the protection of women and girls for two-weeks.

It is a well-known fact that gender-based violence can take many forms, from physical to mental, and can have long-lasting negative impacts on the well-being of women and girls. However, according to the UN, various forms of violence against women have been on the increase since March, thereby, creating a “shadow pandemic”.

In response to the uprise in violence against women, the UN is calling on countries to take urgent action to fund women’s rights organizations, support for health and social services, make services to address gender-based violence services essential, prioritize police responses, and collect data.

Go Deeper:
Activists launched the 16-days of Activism movement at the annual international campaign at the inaugural Women’s Global Leadership Institute, Rutgers University in 1991, and the Center for Women’s Global Leadership has led the initiative ever since. The movement has since attracted more than 6,000 organizations from approximately 187 countries, and it is currently the longest-running women’s rights campaign in the world.’

Ghanian President, President Nana Dankwa Addo Akufo-Addo is currently under intense fire from a section of the public for not fulfilling any of his promises, and this has led to the hashtag #AkufoAddoIsScam topping the trends on Ghanaian Twitter.

One of the promises made at the beginning of his tenure as President was to end galamsey in the country at the expense of his presidency.

However, he is now being called out by his people for not only failing the people but also allowing members of his administration to engage in galamsey.

In addition to his failed promises, a high number of controversies have arisen under his administration and even after nearly reaching the end of his first term in office, the canker persists.

Go deeper:
Another promise that has not been fulfilled or implemented was his vow to build 350 senior high schools and a new oil refinery in Takoradi.
Furthermore, President Nana Addo Dankwa Akufo-Addo had earlier tagged the year 2020 as the “Year of Roads”. He claimed that his government would embark on an aggressive road development across Ghana.
None of which has been started or fulfilled.
As Ghana is only fourteen days away from the general elections, the President is being trolled on Twitter for failing his promises and turning a blind eye to the corruption, scandals and illegal deals thriving in his administration. Therefore, leaving a stain on his mantra, personality and government.

An Egyptian court recently added not one but approximately thirty (30) people including leading pro-democracy activist Alaa Abdel-Fattah, Islamist politician Abdel-Monaem Abul Fetouh and over 26 others to the terrorism list for the next five years.

Reports state that the addition was due to accusations levelled on these individuals, who are suspected of having joined the banned Muslim Brotherhood. The ruling by Judge Hassan Farid the previous week includes a travel ban and freeze on each individual’s assets for three years but this ruling is subject to an appeal within 60 days.

Other citizens who made the list include Mohammed el-Kassas, deputy head of Abul Fetouh’s party, human rights lawyer Mohammed el-Baker and El-Hassan el-Shater, son of Khairat el-Shater, well-known and long seen as Brotherhood’s most powerful leader.

It is pertinent to note that every one of these individuals has experienced a fair share of arrests and prison visits in the past years, Mohammed el-Baker was arrested in September 2019 while attending the questioning of Abdel-Fattah, Mohammed el-Kassas was arrested in 2018, Abul Fetouh was arrested in February 2018 and Abdel-Fattah spent five years in prison until his release in March 2019, for taking part in a peaceful protest against military trials for civilians.

Go deeper:
Although Egypt’s Terrorism list has been referred to as “a mockery of due process” by the Human Rights Watch, Egypt’s government under Abdel Fattah el-Sisi, a former military general-now the president, has shown no signs of reducing the number of citizens being added to the list.
El-Sisi’s administration has also been criticised over the years for human rights violations and has been noted for ‘overseeing the most massive crackdowns on dissent in the country’s modern history.’

Ethiopian refugees in Sudan are set to face a long line of measures.

The ongoing conflict between the Ethiopian government forces and the Tigray People’s Liberation Front (TPLF), has led to thousands of Ethiopians fleeing the country to neighboring Sudan, with the United Nations (UN) estimating the number of displaced Ethiopians to have exceeded 38,000, most of which escaped from the Ethiopian Tigray region.

This influx of Ethiopian refugees has triggered the Sudanese authorities to draft a plan as well as measures for emergency health interventions to address the flow and sought the cooperation of local and international organisations.

A meeting was held to this effect, with representatives of local and international aid organizations including the UN High Commissioner for Refugees (UNHCR) in attendance. The main agenda was to accelerate the provision of aids in the shelter camps with relief materials including medicines, foods, and other logistic requirements.

The conflict in the country seems to have no end in sight, as Ethiopia’s prime minister Abiy Ahmed continues to reject growing international consensus for dialogue and the request for a halt to the violence been perpetrated in the Tigray region, saying ‘the intervention is unwelcome and his country will handle the conflict on its own.’ And as a 72-hour surrender ultimatum runs out on Wednesday, the fighting may be extended for longer.

Ethiopian government forces have also encircled the Tigray capital, Mekele with tanks and the prime minister has gone ahead to issue a statement saying that ‘the international community should stand by and watch, until the government of Ethiopia submits its requests for assistance to the community of nations.’