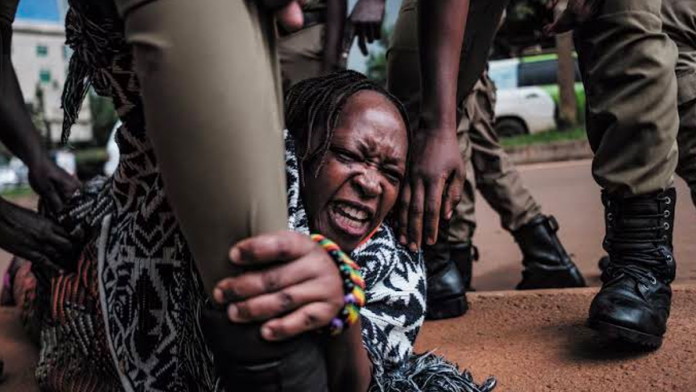 Nigerians did a thing with the #EndSARS campaign and it is a no-brainer why Ugandans have summoned the courage to speak up against police brutality. A couple of them have taken to Social media and with the hashtag #StopPoliceBrutalityinUganda.

Police brutality is now a trend in most of the countries in the world but in Africa, it has become a thing of concern. It is sad how it is mostly innocent citizens who have done nothing against the law who have been brutalised by the police. The police force have forgotten quickly, that protesting is a right any country citizen should have and should be treated as such and that citizens should be protected at all cost even when they are in the wrong.

Elections are coming up next year in Uganda and some days ago, a video circulated where security officials broke the windscreen of a Presidential candidate, Bobi Wine, to arrest him for a reason no one knows about. It is almost as if election seasons come with violence from security forces. It is puzzling.

But maybe Ugandans should find other ways to speak up instead of taking to the streets to protest. Taking a cue from their Nigerian counterparts, we can see how the protests spiralled into something else that caused more harm than good, even though Nigerians hope for the best outcome regardless.

Protesting feels like children shouting at their parents for not providing basic needs like school fees and a roof under their heads, only that this is citizens against their government. And from experience, it takes a lot of tact for governments to respond accordingly to protests. No government plans for protests or expect citizens to take to the streets to question their ability to govern.

So imagine what it would be like to have a government make provisions for protests. Imagine a government informing the security forces to protect the lives of people protesting. Imagine the government actively listening to the concerns of the people with emotional intelligence without feeling threatened. Alright, back to the subject of discussion.

It won’t be surprising to see other African countries speak up against other ills in the society and most are already doing so. In Angola, there are protests against police brutality, #ShutitAllDown in Namibia, a call to end Gender-based violence, #EndAnglophoneCrisis in Cameroon, etc. These concerns must be communicated in a way that not only starts with protests. By observation, protests have opened us up to more harm than good because the security forces have resorted to using hot water cannons and tear gas to disperse the crowd. Our voices must be heard and it can be done in a way that ensures a win-win situation for all parties involved.

When lives are lost, we tend to get really emotional that almost makes us not think logically. It is not always the case, but we can understand the kind of government we are working with so that we can know how best to get their attention to meet the needs of the society they must have missed or ignored. Just as the government officials need emotional intelligence, we also need same in dealing with them.

Put yourself in the shoes of these government officials. This is something most of us have probably never done that because we cannot even imagine ourselves in those positions of service. We think all the government exist for is to be criticised when they make wrong economic, political moves.

Are the Ugandan police or any police force to be blamed for the failed systems that was responsible for their training?

Maybe citizens can develop cordial relationships with the police force. They are humans too who need love and compassion because when people act out in violence, it is because they don’t know any better. The person with the bigger perspective wins and can seek to ensure other parties win too.

So this is an appeal for Ugandans and other African countries to seek ways to do more than just protest but seek out opportunities to have a win-win situation when the society faces injustice in any form.

Police brutality is a form of injustice and should be treated as such. Ugandans are right for speaking up against police brutality and they deserve to be listened to.

Here are the voices of the people of Uganda: