Y! For Africa Focused on Emerging Leaders and Culture Shapers
Home 54° Across Africa Wife of Late Jerry Rawlings, Nana Konadu Agyeman-Rawlings to Contest in the 2020 Presidential Election, Despite Calls for a Withdrawal 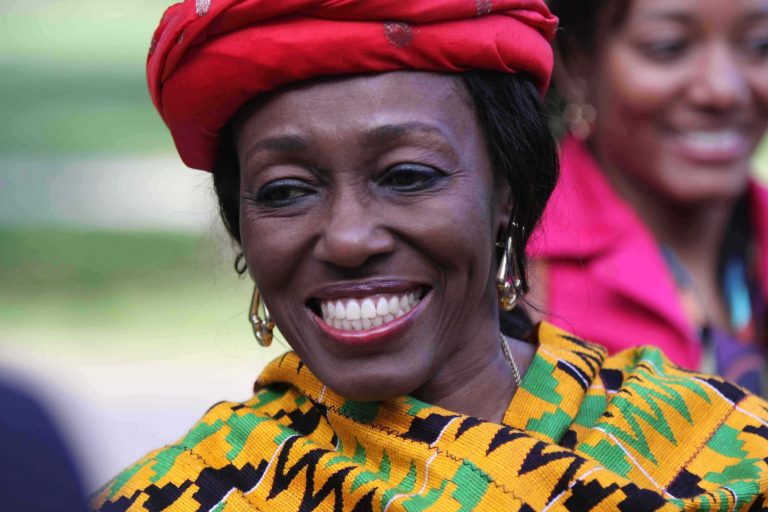 Despite calls to withdraw her interest in the 2020 Ghanaian election, the wife of former president, Late Jerry Rawlings, Nana Konadu Agyeman-Rawlings has intensified her election campaign on the road to the presidential seat.
Speaking on this issue, the National Democratic Party (NDP)’s running mate, Peter Kwame Asamoah said, “Her Excellency, Dr Mrs. Konadu Agyeman-Rawlings will certainly not withdraw from this race.”
The NDP has accused the National Democratic Congress (NDC) of taking undue advantage of the death of the former president as a campaign strategy to stir up trouble.
Go Deeper: Jerry Rawlings died of a heart attack on Thursday morning. Following his death, many political observers are of the opinion that it is wrong for his wife to continue in the fight for a position he previously occupied, and are calling for her to step down from the race.

The Finance Minister of Rwanda, Uzziel Ndagijimana, has announced the government’s plan to raise $15million for its first batch of Coronavirus vaccines when they become available on the market.
According to Ndagijimana, arrangements have been made to have a part of the funds contributed, while the government will raise the rest. How this contribution would be made is still unclear.
In administering the vaccines upon its arrival, the country would be targeting 30% of its population, placing priority on high risked groups including persons above 65 years of age and front-line health workers.
Go Deeper: Rwanda has been praised for its measures to curb the Coronavirus pandemic. It had introduced one of the strictest and effective COVID-19 lockdowns on the continent in March, leaving it with 5,779 cases and 47 deaths to date.

NSFAS to cover student feeding and personal expenses in 2021.

The National Student Financial Aid Scheme (NSFAS) recently consented to the disbursement of additional funds to students in South African universities whose academic year have been extended from 2020 to 2021. This fund is geared at covering these students’ living allowance which includes feeding and personal expenses.
University students who are required to spend extra months to complete the 2020 academic year are the sole target of this scheme. Despite South Africa’s difficult fiscal plight and no extra government assistance, NSFAS has taken the bull by the horn to gather funds to this effect.
Dr Blade Nzimande, Minister of Higher Education, Science and Innovation warns the proposed beneficiaries to spend the funds wisely. “You spend it wrongly, you destroy your future easily,” he said.
Go Deeper: The extension in the 2020 academic year stems from the Covid-19 pandemic and the subsequent lockdown, but recent activities reveal that South Africa is putting her best foot forward in her efforts to wrap up this year’s session across universities in the country.
Not only is the NSFAS funding in the pipeline, the nation has equally drafted plans to conclude the 2020 academic session by March 2021 and kickstart a new academic session by late March 2021 and latest, April 2021.

More money for Nigeria as AFDB approves $25b for Agricultural development

Nigeria alongside four other African countries – Senegal, Gabon, Mali, and Sudan became the beneficiaries of the recently approved African Development Bank’s $25 billion investment fund.
The fund is targeted at the development of the agricultural sector in Nigeria and other developing countries, to strengthen the economy and grow the capacity for the exportation of agricultural produce while reducing the rate of importations.
The approval of the investment fund was announced at a virtual conference to mark the 10th anniversary of Sahel Group by Dr. Akinwunmi Adesina, president of the African Development Bank Group (AfDB), who opines that ‘the next generation of future billionaires and millionaires in Africa will come from the agricultural sector.’ He makes this prediction based on the size of the food and agricultural market estimated at over $1trillion by 2030.
Go Deeper: While the benefiting countries look forward to disbursing this fund to the appropriate channels, Dr. Adesina went on to emphasise the importance of the Africa Continental Free Trade Area (AfCFTA) agreement, imploring African countries to utilise the market effectively through agro-industrialisation and produce more food.

Tanzanian Government set to Team Up with Mozambique to Contain Terrorists

Tanzania’s government has confirmed plans to team up with the Mozambique government to launch a joint operation against violent attacks by Islamist militants along their shared border.
In recent times, several attacks blamed on Islamist extremists have targeted the border village of Ktaya in Tanzania’s Mtwara region.
Because of this, Tanzania has already increased security along the border, and the government has now decided to join forces with Mozambique to contain the situation. Although opposition parties and various human-rights groups have raised concerns about the methods that would be used to tackle the threat.
Go Deeper – The Tanzanian Police reports that, over 175 houses were set ablaze and several people were killed by assailants, who authorities claim fled into neighboring Mozambique.
Simon Sirro, Tanzania’s police commander explains that the joint operation is paramount because the attackers have been confirmed to come from Mozambique and there is enough information to make sure that the terrorists are made to face justice.
However, he pleads with the people of Tanzania who live in the neighbouring villages to make sure that they relay necessary information to the Police.