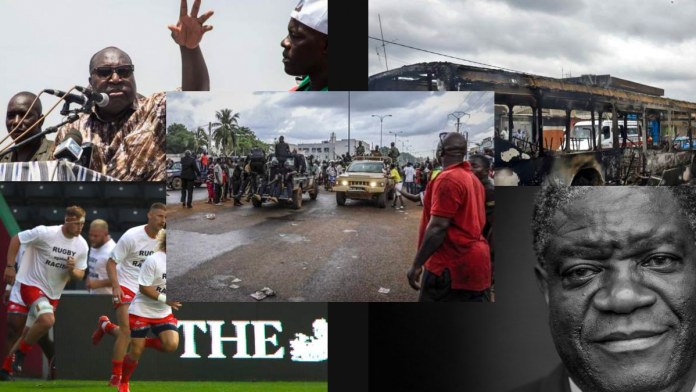 Mali’s military leaders have ordered the closure of all border crossings and imposed a night-time curfew, according to an announcement by Malian Air Force deputy chief of staff.

He also extended an invitation to opposition groups – which have been calling for reforms – for talks leading to fresh elections.

“Civil society and political social movements are invited to join us to create together the best conditions for a civil political transition leading to credible general elections for the exercise of democracy through a road-map that will lay the foundations for a new Mali,” he said.

Go deeper: The armed forces in Mali have ousted President Ibrahim Boubacar Keïta from power and declared their intention to set up a transitional government ahead of new elections.

The president made an appearance on state television announcing he has resigned from office.

He and his prime minister were taken at gunpoint from the capital to a military camp.

The United Nations and African Union have denounced the military takeover.

The regional organisation, Ecowas, announced a blockade along the country’s borders and have suspended financial links.

The UN Security Council will meet later on Wednesday.

Burkina Faso opposition to unite behind one candidate

The opposition in Burkina Faso has agreed to rally behind any challenger to President Roch Kaboré who reaches the second round in November’s elections.

Should two opposition candidates reach the second round, then their respective parties would support them, the agreement states.

The first round of the presidential election will be held on 22 November.

The CDP was thrown out of power in Burkina Faso’s last election in 2015, after former president Blaise Compaoré’s attempt to extend his 27-year rule was met by a popular uprising. Since then, the centre-left People’s Movement for Progress (MPP) has controlled the government, led by President Roch Kaboré.

A few African countries have postponed elections because of the pandemic, but apparently it looks like those elections will be happening in the coming months so that there is a sense of progress in these countries.

The police in Ivory Coast have arrested a man who allegedly set busses on fire last week during mass protests in the commercial capital, Abidjan.

The violent protests have been going on for weeks since the ruling party nominated President Alassane Ouattara to seek re-election for a third term.

The directorate of police announced on Facebook that the suspect was arrested after members of the public reported him.

He was found with a can of diesel and admitted to setting several vehicles on fire with four of his friends, according to a police note published by Fraternité Matin newspaper.

President Ouattara had ruled out running for re-election but reconsidered after his preferred successor Prime Minister Amadou Gon Coulibaly, who had been nominated by the ruling party, died unexpectedly of a heart attack last month.

Go deeper: Two weeks ago, Ivory Coast President Alassane Ouattara said he would seek re-election in October, formally accepting the ruling party’s nomination to be its candidate and defying opponents who say the constitution forbids a third term. This has sparked clashes between between Ouattara supporters and backers of rival candidate Henri Konan Bedie.

Reaching agreements when it comes to politics in Africa still feels like something we are yet to figure out. The quest for power seems so intoxicating that it impedes every sense of reasoning and agreements or most times, even the constitution that had been laid out.

Ouattara, who has governed since 2011, said in March he would not run again. But his preferred successor, then-prime minister Amadou Gon Coulibaly, died in July, leading the party to ask Ouattara to reconsider.

The election is seen as the greatest test yet of the tenuous stability achieved since a brief civil war in 2010 and 2011 killed about 3,000 people following Ouattara’s first election win.

The campaign group Physicians for Human Rights (PHR) has said that a famous Congolese surgeon has been getting death threats and called for the UN to protect him.

PHR said Dr Mukwege has been “a target of an alarming intimidation campaign” including being sent death threats by text message.

It says the threats appear to be a response to Dr Mukwege calling for people to be prosecuted for serious violations of human rights during the DR Congo wars between 1993 and 2003.

In July Rwanda’s former minister of defence Gen James Kabarebe denounced Dr Mukwege on state television saying he was among “those who spread false propaganda of Rwandan army killing civilians in Congo”.

PHR appealed to the UN peace mission in DR Congo to “ensure continued protection” of Dr Mukwege and the staff at his hospital in the city of Bukavu, in the eastern region.

As a longstanding partner of Dr. Denis Mukwege – the renowned Congolese surgeon, 2018 Nobel Prize for Peace co-laureate, and Founder and Medical Director of Panzi Hospital, South Kivu of the Democratic Republic of the Congo (DRC) – Physicians for Human Rights (PHR) is urgently appealing for immediate action to protect the doctor, his family members, his patients, and the vital work of the staff at Panzi Hospital.

Again, freedom of speech seems like it’s just for the record in most African countries.

South Africa’s Sports Minister Nathi Mthethwa has asked the country’s rugby association to explain the actions of eight national team players who refused to kneel in support of the Black Lives Matter (BLM) movement ahead of an English Premiership match at the weekend.

The Sale Sharks players were among 11 who elected to remain standing during the pre-match activities against Harlequins.

Players from both sides wore “Rugby Against Racism” T-shirts.

“You must remember we were together at the World Cup in Japan as a country with some of the players and one thing which cannot be tolerated is when somebody is displaying racist behaviour and showing racist attitude,” said Mr Mthethwa.

In a seven-minute long video posted on his Instagram account on Sunday, the 29-year-old flanker admitted he had previously shied away from the topic because he was “scared”.

The black lives matter movement gained traction after the killing of African-American George Floyd by a white police officer in Minneapolis in May. Since then, the movement has been represented all over the world, in Sports especially.