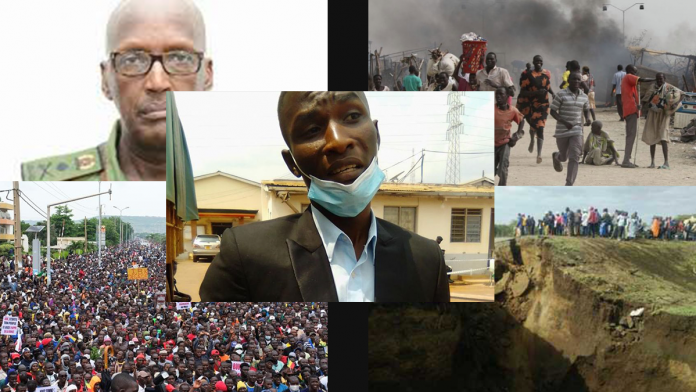 The general unveiled his promise for “a renewed Uganda” under the slogan “Kisoboka” meaning “it is possible”, along with a song.

During the launch, Tumukunde expressed confidence in winning the general election.

He had on Tuesday said he would launch his bid on International Youth Day so as to give hope to the future generation.

Go deeper: Henry Tumukunde is a retired senior military officer of the Uganda People’s Defence Forces (UPDF). He was the Minister of National Security in the Cabinet of Uganda, appointed to that position on June 6, 2016. On March 4, 2018, he was relieved of his duties in an unexpected cabinet reshuffle.

He is also a qualified lawyer. He has served as the UPDF’s chief of personnel and administration, chief of military intelligence as well as serving as the commanding officer of the UPDF Fourth Division, based in Gulu in the Northern Region of Uganda. He has also previously served as the director general of the Internal Security Organisation (ISO). Tumukunde was also a Member of Parliament representing the Army in the Parliament of Uganda between 1995 and 2005.

Having retired soldiers seeking political positions in Africa is a common phenomenon. Their manifestoes usually revolve around ‘restoration’, just like during the military era, when soldiers thought civilians were doing it wrongly. This restoration agenda is usually a cover to what eventually obtains when they assume power.

Security forces fired tear gas to clear demonstrators demanding the resignation of President Ibrahim Boubacar Keïta. The march started on Tuesday, when hundreds of protesters spent the night on the streets.

An alliance of opposition and religious leaders is spearheading the protests against economic decline, alleged government corruption and a long-running jihadist conflict.

Regional efforts to bring an end to the crisis have failed, with the opposition refusing to compromise on their demand that the president resigns.

Other details: The gathering marks the first time the June 5 Movement has staged a protest since July 21, when the opposition group declared a temporary truce in a month-long push for Keita to resign.

It staged the demonstration despite a call to stay home from Nigeria’s ex-president, Goodluck Jonathan, a mediator for the Economic Community of West African states (ECOWAS) in Mali’s crisis.

Hillary Humphrey Kaweesa, a 19-year-old Ugandan has picked nomination papers to vie for the presidency in the upcoming general elections.

He said he had always been a leader and was qualified to lead the country.

Kaweesa is also required to collect 100 signatures in every district for his nomination. The country has more than 100 districts.

The constitution allows any Ugandan citizen who is above 18 years to vie for the presidency.

Go deeper: What is striking here is a teenager contending with an incumbent, an army general, and a popular figure. His decision will definitely spark a conversation across Africa and the world.

Ambitions like this should be encouraged in all African countries.

Clashes between civilians and soldiers during a disarmament exercise in South Sudan have killed 127 people, according to army spokesman Maj-Gen Lul Ruai Koang.

Among the dead are 46 security personnel and 82 civilians.

The fighting in the central town of Tonj in Warrap State erupted after soldiers tried to disarm civilians involved in cattle raiding and communal clashes.

More details: Effort are being made to disarm communities in South Sudan and it has fuelled deadly clashes. The authorities have a plan to reduce the number of weapons in circulation in a country but the civillians are not having it.

Being forceful seems to be the way South Sudan have chosen to embark on this quest. How about South Sudan take a cue from other African countries, especially Nigeria, where amnesty is an option. Though Nigeria has little to show for her amnesty deals, it sure is another peaceful way of disarming civilians without casualties.

A 6.0 magnitude earthquake hit Tanzania on Wednesday night and its seismic waves felt in parts of neighbouring Kenya.

It’s epicentre was Vikindu – just outside the commercial hub of Dar es Salaam, according to the US Geological Survey (USGS).

The tremors were felt in Kenya’s coastal town. This comes days after residents living around Kenya’s Lake Baringo reported tremors as water levels in the lake rise because of ongoing rains.

The tremors were reported by people living as far as 7km from the lake and were said to have mostly happened every night for the last two weeks.

More details: Earthquakes along the coast of Tanzania are relatively rare but today’s event has been the strongest in decades. In September 2016, a 5.7-magnitude earthquake hit northwest Tanzania killing at least 13 people and injuring more than 200 others. The tremors were felt as far away as western Kenya. This proves that the occurrence is one to be expected.

Luckily, even after 15 hours since the magnitude 6.0 earthquake struck near Tanzania’s coast last night, there are no reports of serious damage or injuries. Had the quake occurred closer to the shore, it probably would have had a much more severe outcome.

As an aside: Do earthquakes happen in Africa?