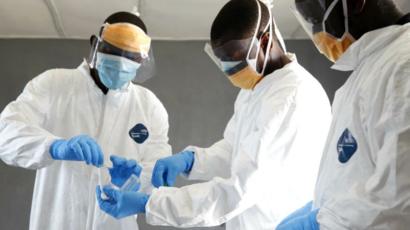 South Africa’s Cyril Ramaphosa disclosed Sunday, that China will give Africa 30 million test kits per month, as well as 10 000 ventilators and 80 million masks.

#Let’sFightThisTogether: Across the continent, organisations and private individuals have launched initiatives to fight the coronavirus pandemic. We have also seen intervention efforts from private individuals like Jack Ma whose foundation teamed up with Ethiopia PM Abiy Ahmed and the AU to distribute logistics across the continent. At this point, and understanding that the continent can’t shut down its economy for too long, African leaders need to come together to stop the spread of the virus.

US mentions Zimbabwe as culpable in ongoing protests

The Zimbabwean government has summoned US ambassador Brian Nichols to explain remarks by US national security adviser, Robert O’Brien, that Zimbabwe was fueling anti-racist protests in the country.

Backstory: Violence has erupted in cities across the US sparked by the death in police custody of African-American, George Floyd.

Now: Zimbabwe’s Foreign Minister Sibusiso Moyo is quoted by state-owned Herald newspaper as saying that the US ambassador was expected to honour the summon over the remarks, but gave no details of when the meeting will be held. He said the government intends to remind the ambassador that Zimbabwe respects the sovereignty of other nations.

UN warns of crimes against humanity in Congo

The United Nations has cautioned that the widespread and systemic killings, beheadings, rape and other barbaric acts perpetrated by militia mostly from the ethnic Lendu community in northeastern Congo may constitute crimes against humanity and war crimes.

Backstory: In the six months to April 2020, at least 296 people were killed, 151 wounded and 38 raped, including women and children, mostly by fighters linked to the CODECO rebel group, said a report by the United Nations Joint Human Rights Office (UNJHRO). The recent attacks against civilians not only targeted the Hema and Alur communities, but included communities previously spared, the report said.

The necessary outcry: Congo, among some other African countries like Nigeria, Sudan, Libya have become hubs of sporadic and sustained killings for fueled political feuds and ethnic bigotry. These killings seem not to bother anyone anymore; especially the leaders in these countries. If Africa ran through how many die from these crimes every week, maybe the ‘efforts’ might become more intentional.

Ghana’s President Nana Akufo-Addo has announced measures to ease restrictions on public gatherings in the country.

Under the new directives, church services and Muslim prayers can take place with 100 congregants at a time and for only one hour.

Social distancing rules and mandatory wearing of masks must also be enforced.

Taking the lead? As Africa is a rather very religious continent, religious leaders across the continent have questioned the closure of religious houses; some saying that is where real healing is. Pastor Chris Oyakhilome, the lead pastor of Christ Embassy in Nigeria admonished other pastors, asking why they did not question the government for closing down churches. Ghana’s action might encourage other countries to consider allowing religious gatherings.

Africans will not wait this out

Africans are angry at the recent attacks by the US government on two top executives from the continent holding lead positions at the World Health Organization (WHO) and the African Development Bank (AfDB).

Go deeper: “For some reason, funded largely by the United States, yet very China centric, the WHO really blew it. We will be giving that a good look. Fortunately, I rejected their advice on keeping our borders open to China early on. Why did they give us such a faulty recommendation?”, the US President, Donald Trump lashed out in a tweet at the World Health Organization in April.

International observers say the real target of Trump’s obsession was the Ethiopian WHO Director General, Dr. Tedros Adhanom Ghebreyesus whose position has been threatened for being too close to the Chinese, an accusation the US continues to level indiscriminately against African leaders.

Like the WHO boss, President of multilateral lender, African Development Bank (AfDB), Dr. Akinwumi Adesina, is also on the firing line by United States government and officials who are out to scuttle his return for second term.