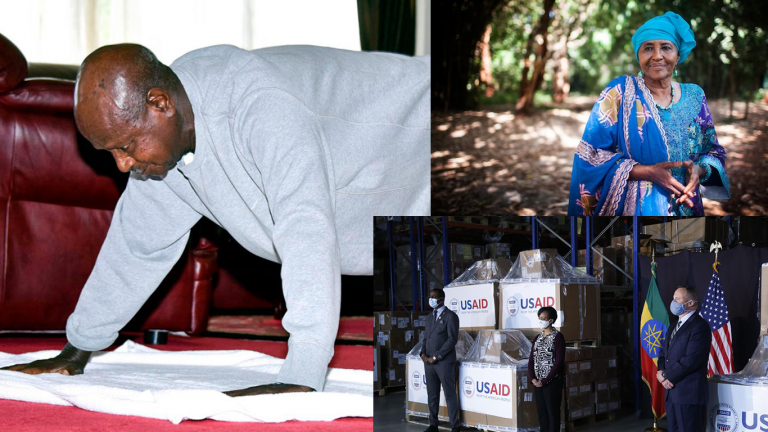 Ethiopia receives ventilators from the US

The US government has donated 250 ventilators to Ethiopia to help in its response to the coronavirus pandemic.

The donation came after a promise made during a phone conversation between President Donald Trump and Prime Minister Abiy Ahmed in April.

The US Ambassador Michael Raynor said the donation “reinforces its unwavering commitment to the Ethiopian people”.

Go deeper: The coronavirus pandemic is paving way for bigger economies to build stronger relationships and project responsible leadership and this move by the US highlights this. Even though, the Trump-led administration has shown less political will to stop the spread of the coronavirus in its home country.

For other big economies like China, France, Russia, the opportunities to create a bond with smaller economies has not evaded them. We will, however, want to understand some of these countries’ activities to know the actual intent.

Russia in war-weary Libya is one of such questionable activities.

Ugandan President Yoweri Museveni has released a second home workout video in a bid to encourage people to keep fit at home during the coronavirus pandemic.

The 75-year-old appears jogging barefoot in a spacious living room, before performing 40 push-ups as a younger voice counts.

He said it was a challenge to his bazukulu – an informal Ugandan reference to youth, but which some people find patronising.

Go deeper: As much as we understand that President Museveni is attempting to sell a young-self, young-mind narrative, we will want to commend him for encouraging citizens to take active part in the fight against the coronavirus by exercising to boost their immune system.

The message Museveni is passing is important in a continent with mostly octogenerians as presidents and a young population who do not believe that COVID-19 is real.

Dr Abdi built a hospital, school and feeding centre near the capital, Mogadishu, serving tens of thousands of displaced people for free.

She is known as the Mother Teresa of Somalia, who remained in the country during the three decades of conflict.

Other details: Dr Abdi was a Somali human rights activist and medical doctor. She was the founder and chairperson of the Dr. Hawa Abdi Foundation (DHAF), a non-profit organisation.

She was nominated for the Nobel Peace Prize in 2012.

Uganda clamps down on trade at Tanzanian border

Uganda is making intentional efforts to control the informal cross border trade with Tanzania and the unregulated movement of people between the countries, to prevent the spread of coronavirus; in a region where cases of infection have increased.

Cross border trade and travel is centred on the town of Mutukula, but people also use unregulated roads, which makes the movement of goods and people between both countries hard to monitor. Some 20 people have recently tested positive for Covid-19 in the region on the Uganda side, after returning from Tanzania.

Now, in order to ensure trade continues, while limiting new cases of infection, the authorities in Uganda’s Rakai district have banned cross border travel, unless it is for business.

Other details: With an estimated population of 15,000 people, Mutukula is an important border post and major crossing point, for both human and commercial traffic. In February 2016, the border post between both countries merged operations on both sides. Vehicles and passengers clear customs and immigration once in the country they are leaving, with officials from both countries present.

The United States has imposed sanctions on a prominent Zimbabwean businessman, KudakwasheTagiwirei accusing him of corruption and providing support to senior officials.

The Treasury Department said it would freeze all US assets of Kudakwashe Tagiwirei and his company, Sadunka Holdings.

It accused him of using what it described as opaque business dealings to rake in millions of dollars.

Other details: Kudakwashe Regimond Tagwirei is a Zimbabwean commodities business person with extensive interests in the energy sector. He’s the founder and current Chief Executive Officer of SakundaHoldings Group.

Tagwirei is believed to have strong ties to prominent politicians in Zimbabwe African National Union – Patriotic Front as his company has been involved in government projects such as Command Agriculture 2016 in unclear circumstances.

Botswana’s government has banned alcohol sales and has all liquor licences halted.

The reason for the ban was the negative effects of alcohol on adherence to Covid-19 protocols.

Last week, the government reinstated a strict lockdown in the capital, Gaborone, for two weeks to curb rising cases.

The country has to date confirmed 804 coronavirus cases and two deaths.

African governments have said to have shown more responsible relationsible leadership in fighting the coronavirus, when compared with other countries like the US, Brazil, etc. There are questions to be answered, indeed, but this move is commendable and other African leaders can take a cue from this.