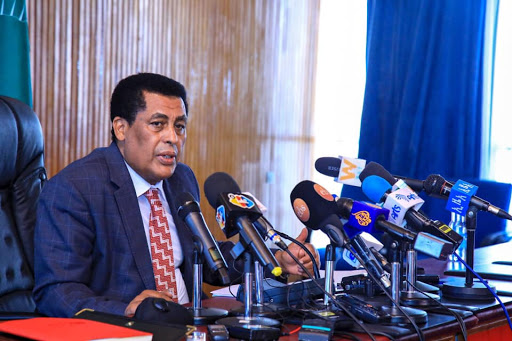 Dina Mufti, the spokesman for Ethiopia’s Ministry of Foreign Affairs, told reporters that the East African nation is generally opposed to mediation by outside parties even though the African Union is welcome to help.

“The tripartite talks between Ethiopia, Sudan, and Egypt on the Grand Ethiopian Renaissance Dam should be concluded between the three countries themselves, not through mediators,” he said.

Grade 7, Form 4 and Form 6, the three examination classes in the country opened yesterday after President Mnangagwa and the health authorities cleared the schools reopening soon after the relaxation of the lockdown level.

The rest of the classes will go back on Monday 22nd March.

Nigeria’s President Buhari has approved the appointment of Dr Oyebode Oyetunde as The Executive Director for Nigeria at the African Development Bank (AfDB) in Abidjan, Cote D’Ivoire – The Guardian reports

Buhari’s Senior Special Assistant on Media and Publicity, Garba Shehu, made this known in a statement in Abuja on Tuesday, 16th March.

Egypt’s president, Abdel-Fattah El-Sisi has issued directives for the rise in remuneration for all state employees and a rise in the monthly minimum wage – News Central Africa reports

Bassam Rady, the presidential spokesman, stated that the president ordered the earmarking of EGP 37 billion in the draft budget for 2021/22 to increase salaries as well as to raise the minimum wage from EGP 2,000 to EGP 2,400.

According to reports, the directives was issued during a meeting reviewing the new draft budget for the fiscal year 2021/22 with Finance Minister Mohamed Maait and Prime Minister Mostafa Madbouly.

The opposition party insisted that the public has the right to know about his whereabouts and who is running the country. Magufuli last appeared in public on February 27 and has been absent since then.

Speculation has been rife that the 61-year-old is ill with the coronavirus – though the prime minister said last week the president was healthy and hard at work.