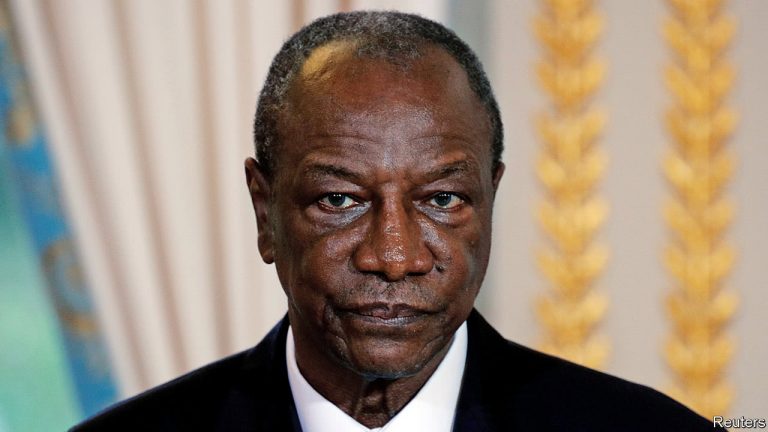 Protesters and security forces clashed after anti-government protests resumed in Conakry, leading to injuries. They are protesting against the unconstitutional attempts of President Alpha Conde to contest for another election term.

The resumption on Monday July 20 follows a three-month coronavirus lockdown. Protesters are kicking against the president’s suspected intention of extending his stay in office after a decade in charge.

Go deeper: The 82-year-old President has been in office since 2010 and the protests are inspired by his decision to run for office again. Conde’s second five-year term ends this year, with an election set for October.

Alpha Conde is on the list of recycled African political leaders who aim to stay longer than expected in power, and attempt to ‘install’ their protegee when they finally agree to step down.

German Defence Minister, Annegret Kramp-Karrenbauer said that the possibility of Libya being divided between Turkey and Russia would not be a good situation for Europe, Deutsche Welle reported Wednesday.

Libya is one the gateways that connect Africa to Europe and has been the stage of nearly a decade long reign of militias who have reintroduced slavery manned with helpless immigrants.

Go deeper: The ‘interventions’ in the Libya crisis that has been on since the ouster of Muammar Gaddafi seem not to be helping the country. With Turkey on one side militarily supporting Libya’s Tripoli-based Government of National Accord, and Russia, Egypt and the UAE on the other side with the rebel General Khalifa Haftar’s Libyan National Army, the end to the crisis has been prolonged.

And with Annegret making such statements, it looks more like Europe is only protecting personal interests and not looking to help stall the conflict.

Sudan’s Prime Minister, Abdallah Hamdok Wednesday, announced the replacement of the military governors of its states by civilians.

Addressing a news conference in the capital Khartoum, Hamdok said that Abdul Fattah Alburhan, the head of the Sovereign Council, has approved the appointment of the 18 civilian rulers of the states in the country, including two women.

“We know that the figure of two women out of the 18 is not enough according to the constitution declaration, but we believe that we are going fine in the democratisation of the country during this transitional period,” he stated.

Go deeper: Fortunately, war-weary Sudan is gradually stepping out of crisis and the transition to democratic leadership is taking a seamless ride.

The unrest in Sudan can be traced back to December 2018, when then President Omar al-Bashir‘s government imposed emergency austerity measures to try to stave off economic collapse.

Cuts to bread and fuel subsidies sparked demonstrations in the east over living standards and the anger spread to the capital, Khartoum. The protests broadened into demands for the removal of Bashir – who had been in charge for 30 years – and his government. Many still remember the dreaded Janjaweed militia, allowed to thrive under his rule and the genocide of black Sudanese that led to the secession of South Sudan.

A council of generals assumed power on 11 April, 2019, but it has struggled to return normality to the country.

Malawi’s Chakwera vows to ‘clear the rubble of corruption’

Malawi’s new president, Lazarus Chakwera, is beginning his term in office raising the country’s minimum wage and promising to ‘clear the rubble’ of corruption.

In an interview with the Guardian, Chakwera, who got a historic victory over Peter Mutharika in June, urged Malawians to trust that he will deliver on his promises.

Go deeper: Since taking office, Chakwera has launched investigations into some of the deals agreed by the previous government, suspending contracts.

He also reaffirmed that he does not want to be seen to target political rivals, something common with African leaders.

A South African woman danced out of a hospital in the Western Cape Province with medical staff at the Groote Schuur Hospital (GSH) clapping and cheering her on.

One in three patients who died from Covid-19 had hypertension or diabetes, the Ministry of Health, Kenya, said as it reported 10 new deaths and 637 infections.

The African Development Bank Wednesday, July 22, approved a $288-million (249-million-euro) loan to South Africa to help fight the coronavirus and mitigate the economic fallout of the pandemic.

Covid-19 is giving rise to prolonged grief disorder for families who have lost loved ones.

Liberia’s President George Weah has lifted the state of emergency he declared in April to deal with the Covid-19 pandemic.