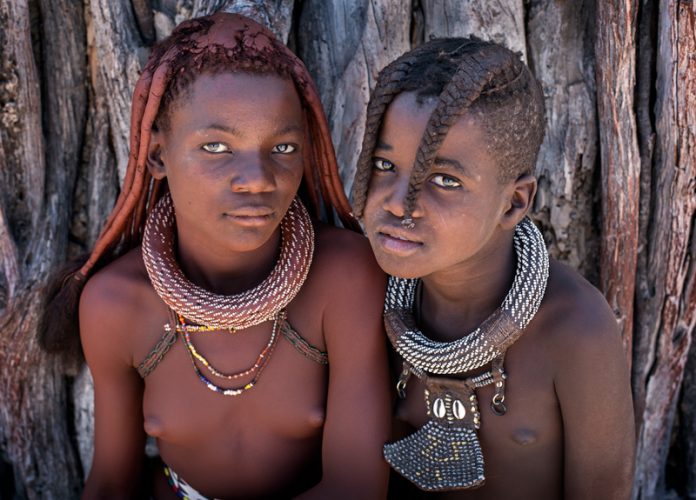 If you heard of a desolate Kunene region of northwest Namibia, then you will then know of a resilient people called the Himba. They are Hunter-gatherers and pastoralists and descend from the southward migrating Herero of Angola. They speak otjihimba, a dialect of the Herero language and have a population of about 20,000 to 50,000.

Fire is life to these people – a holy fire called Okuruwo. Okuruwo, through the smoke, symbolises a connection with their god Mukuru – The ancestors act as Mukuru because he is busy in a distant realm. The fire burns at the centre of the village and is never allowed to go out, and each family has a fire-keeper whose job it is to tend the sacred blaze. Their homes surround an okuruwo and their livestock.

Day-to-day tasks are traditionally split, and women tend to do more labour-intensive work than men do. They are the ones that carry water to the village, build homes and milk cows. Men handle political tasks and legal trials. The division extends to the use of water for bathing which is reserved exclusively for men. Women use herb-smoke from fire to cleanse their pores and maintain personal hygiene.

Himba women are famous for rubbing their bodies with otjize, a mixture of butter fat and ochre, believed to protect heir skins against harsh weather. The red mixture is said to symbolise earth’s rich red colour and the blood that symbolises life.

It will interest you to know that Himba operates a bilateral traditional clan structure. Bilateral descent means every clan member belongs to two clans, the mother and the father. Inspired by this, the son lives with the father’s clan and the wives. However, inheritance passes from the maternal uncle.

THen we have the unique hairstyles, which indicate age and status. The elaborate hairstyles have become synonymous with any safari to the Kunene region of Namibia. A young girl typically has two plaits (ozondato) of braided hair, the form being determined by the oruzo membership (patrilineal descent group). Before puberty, the girls wear long plaitlets worn loose around the head. When girls have completed their puberty ceremony, the ekori festival takes place and she receives the ekori headdress made from tanned sheep or goatskin with three leaf-shaped points, often decorated with iron beads. When she has been married for about a year or has a child, the ekori headdress is replaced with the erembe headdress made from the skin of a goat’s head and fastened under the hair at the back of the head by two thongs.

From young children with clean shaved heads to braids and plaits facing forward and backward and finally, to the erembe, the often red-ochred hairstyles are both gorgeous.

Meanwhile, the men also wear different hairstyles, such as the single plait – ondato – worn by young boys down the back of the head, two plaits – ozondato – worn by Himba men of marriageable age and the ombwiya headdress, a scarf made from fabric covering the hair and decorated with an ornamental band.

THere’s so much more to know about these people!