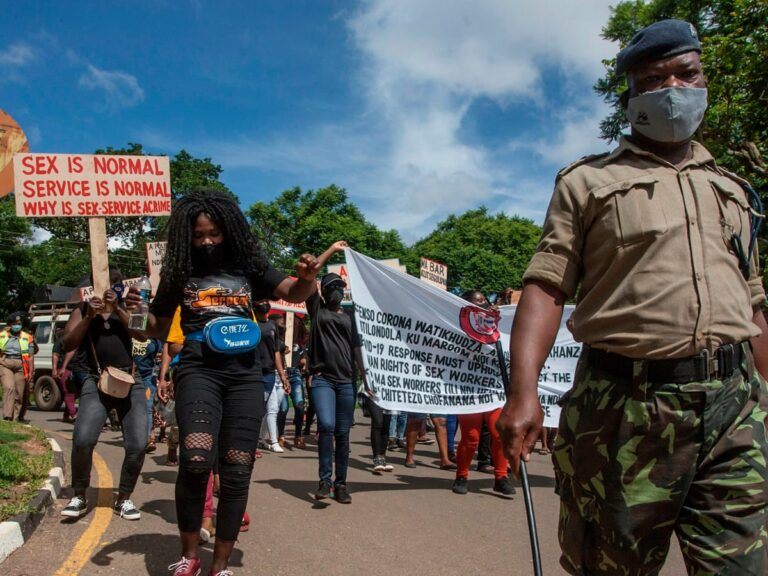 According to the report, these preventive measures had reportedly forced sex workers to reduce their charges by 30 per cent as the largest constituency of their clientele had stopped frequenting entertainment joints and bars.

This informed the sex workers, under their national banner, Female Sex Workers Association (FSWA), to take to the streets of Lilongwe where they protested the measures.

Buhari urges Nigerians to get vaccinated

At a media briefing in the Federal Capital, Abuja, Buhari himself was vaccinated using the AstraZeneca COVID-19 vaccine, manufactured by the Serum Institute of India and provided through the global COVAX initiative.

“Yesterday, our frontline medical personnel, top on the priority list, were vaccinated. Today, as a demonstration of leadership and faith in the safety and efficacy of the vaccines, I have received my first jab and I wish to commend it to all eligible Nigerians, to do the same so that we can be protected from the virus,” Buhari said.

Members of Parliament in Lybia from both sides of the divided North African country arrived in the frontline city of Sirte on Sunday, 7th March for a session this week to debate a proposed unity government – Reuters Africa reports

The parliament, as most state institutions, have been split since after it was elected in 2014, where Libya broke between warring factions in the east and west.

Alioune Badara Cissé, known as the mediator of the republic, has urged the authorities to stop threats and intimidation against protesters. The mediator also called for those on the streets to act peacefully and stop looting.

The Senegalese unrest was triggered by the arrest of opposition leader Ousmane Sonko.

President Teodoro Obiang, in a statement on national television, said the blasts on Sunday were caused by negligence related to the use of dynamite at the military base. No other details were immediately available.