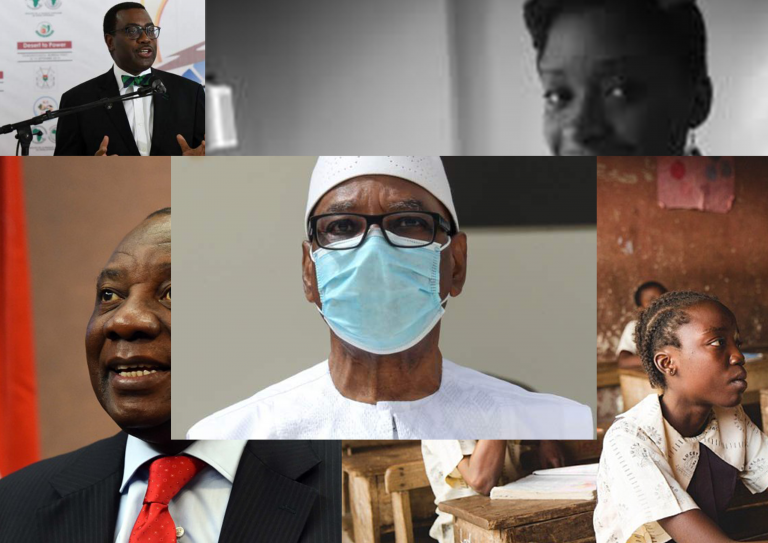 Mali’s President Ibrahim Boubacar Keïta has appointed a slimmed down cabinet to work towards a government of national unity, according to a statement from his office.

It said the new cabinet would include the Prime Minister Boubou Cissé and six other ministers.

This came hours after a summit of West African leaders called for the swift creation of a unity administration and a fresh vote, following disputed elections.

The opposition coalition in Mali had earlier rejected a proposal for a national unity government, insisting the president must go.

Go deeper: Tens of thousands of protesters have answered opposition calls to take to the streets in recent weeks, raising concerns the unrest could derail the fight against Islamist extremists in the region.

The protests, motivated by contested local elections and perceived government corruption and incompetence, got more intense this month after Police killed protesters. At least 14 people have died in clashes, according to the United Nations.

Zimbabwe’s ruling party, Zanu PF, has accused the US Embassy of sponsoring Friday’s planned anti-government protests and threatened to expel its ambassador.

Party spokesperson, Patrick Chinamasa said the protests, intended to condemn corruption in government, is an attempt to overthrow the government and suggested they could be met with force. The government summoned US ambassador Brian Nicols after a senior White House official said Zimbabwe was among “foreign adversaries” using the civil unrest in the United States following the death of George Floyd to interfere in U.S. affairs.

Chinamasa accused Nicols of “acting as a thug“. The US embassy has, however, rejected claims it is trying to destabilise the country. The US, UK, EU embassies and the United Nations have all criticised Zimbabwe for the arrest of journalists and political challengers.

Go deeper: The Zimbabwe-US relations has been sour for years on now. Zimbabwe’s former President Robert Mugabe in 2008, directed his anger at the then United States ambassador James McGee after the diplomat questioned the results of Zimbabwe’s 2008 general elections.

Before then, in 2005, Mugabe had threatened to throw out then US ambassador to Zimbabwe, Christopher Dell, telling him “he could go to hell” after Washington’s top man in Harare had criticised the Mugabe administration.

But now, even with a new president and administration at the helm, it appears as if the long-running frosty relations between the countries continues. The US maintains targeted economic sanctions against Zimbabwe over poor human rights record.

Chinamasa urged party supporters to defend themselves from protesters and avoid a repeat of the deadly violence that followed post-elections demonstrations in August 2018 and the January 2019 protests over a steep fuel price hike.

The International Monetary Fund (IMF) has approved a $4.3 billion (£3.3bn) loan to South Africa to help it deal with the impact of the coronavirus pandemic which has devastated the economy. The first time in South Africa’s history to receive an IMF loan.

South Africa is the hardest hit country on the continent with nearly 450,000 confirmed Covid-19 cases.

Finance Minister Tito Mboweni said the money will be used for economic recovery along with Covid-19 interventions, which include supporting the country’s fragile public health system and helping front-line health workers.

South Africa is facing its worst economic downturn in nearly a century and a record budget deficit this year. And, before the pandemic, the economy had been struggling for over a decade with low growth, high unemployment rates and rising government graft. In March this year, Nigeria overtook South Africa as the continent’s largest economy.

The country is facing its worst downturn in nearly a century and a record budget deficit this year after President Cyril Ramaphosa ordered one of the world’s strictest lockdowns in March.

Nigeria to reopen schools next week

Nigeria’s Federal Government has announced that final year students in secondary schools will resume classes next week ahead of their examinations.

The ministry of education said the students will report back on August 4 and start the West African Senior School Certificate Examination (WASSCE) from August 17.

Go deeper: In recent weeks, the back and forth with the students has caused an uproar; especially when the government postponed the exams further from August 5, 20 days ago. The schools were closed early this year due to the coronavirus pandemic, but the government is giving a go ahead for secondary school students in their final year to write the West African Examination Council Examination (WAEC) to prevent delays in their educational journey.

The African Bank of Development (AfDB) leader Akinwumi Adesina has been cleared of corruption by an independent probe, according to AFP news agency.

The independent review into Adesina, who intends to run for a second term as head of AfDB, came after immense pressure from Washington. According to the bank’s board, the inquiry must finalise its work within four weeks in time for the election of a new head scheduled for August.

Go deeper: Adesina was accused of poor governance, impunity, personal enrichment and favouritism. Some AfDB staff accused Adesina of multiple abuses and breaching the institution’s code of ethics. The whistleblowers submitted a 15-page report which alleges that Adesina was involved in embezzlement, awarded contracts to friends and relatives, gave fellow Nigerians senior positions and promoted people suspected of fraud. An internal inquiry cleared the 60-year-old Adesina of wrongdoing.

The AfDB president had mentioned that the US has not legal ground to call for a separate probe but says he is open to it, knowing he is not guilty of any of the allegations levelled against him.

The Caine Prize is an annual literary award for the best original short story by an African writer, whether in Africa or elsewhere, but published in the English language.

Okojie was announced the winner of £10,000 (approximately N4.8 million) award prize on Monday afternoon at a virtual unveiling on YouTube, for her short story “Grace Jones.”

Backstory: Earlier in May, a five-writer shortlist was released for the 20th edition that featured stories that “speak eloquently to the human condition through a diverse array of themes and genres“. It was virtually graded by the judging panel.

The shortlisted authors for this year’s prize are from Namibia, Nigeria, Rwanda and Tanzania. Three out of the five writers are Nigerians. One has dual citizenship (Namibia, Rwanda).