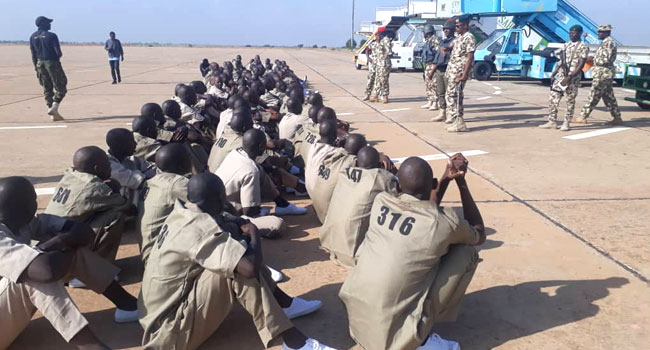 The Federal Government of Nigeria will soon commence the trial of 5,000 suspected Boko Haram members who are in various detention facilities nationwide – This Day reports

Mr. Aliyu Abubakar, The Director-General of Legal Aid Council, in a visit to Prof. Babagana Zulum, Borno Governor, hinted that the trial would be conducted by the Office of the Attorney-General General of the Federation (AGF), the Office of the National Security Adviser (NSA), in collaboration with the Theatre Command, Operation Lafiya Dole.

According to the publication, Alkache Alhada, Niger’s Interior Minister, told reporters on Thursday, 25th February, that lives were lost and hundreds arrested in the unrest that arose in the country.

“Of the demonstrations that were held, obviously there was a toll. Unfortunately, there were two deaths. There was also damage and destruction of public and private infrastructure. One of your own, the journalist Moussa Kaka, his house was burnt,” Alhada told newsmen.

Amnesty: At least 14 killed at religious site in CAR

In a report by Amnesty International, at least 14 lives were claimed from clashes between armed groups and security forces.

The organisation also said, “many people” have been displaced in the southeastern city of Bangassou while humanitarian aid into the country was blocked.

South African Finance Minister, Tito Mboweni read out the 2021 budget proposal which will have the country not increasing the personal income tax. However, The Budget proposes that South Africa Treasury Department will pay for the COVID-19 vaccination.

“We are allocating more than R10-billion ($708 million) for the purchase and delivery of vaccines over the next two years,” Mboweni told the National Assembly.

According to the court, it did not find any evidence to support the charge against Halima Mdee who was charged in 2017 for reportedly saying in Swahili that “the president is talking aimlessly, he needs to be stopped”.