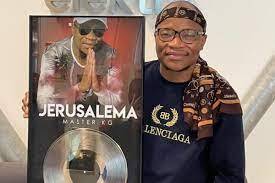 South African singer and music producer, Kgaogelo Moagi popularly known as Master KG has had quite an eventful week.

The organisers of the South African Music Awards recognised the Jerusalema hitmaker and gave him this year’s International Achievement Recognition award. This is just days after his globally acclaimed and loved hit song Jerusalama became Diamond certified in France.

Music Business Worldwide broke down the different certification levels in France, writing that one sale counts as 150 streams. So, Jerusalema must have surpassed 35 million streams in the country to be certified.

Master KG, 25, quickly took to social media to celebrate the feats and thank his fans, writing, “Today I received the biggest certification so far in my career, Jerusalema featuring Nomcebo is now diamond in France. Damn! Thank you, guys and all the team Open Mic, Elektra.Africori and Warner Music France,”

Master KG is currently touring both France and Italy. He recently teamed up with superstar DJ and songwriter David Guetta and singer/songwriter Akon on a new track, Shine Your Light. And, there are speculations that he could drop an EP soon and his fans are giddy with excitement.

Master KG was born January 31, 1996, in South Africa. He was raised in the small town of Tzaneen, situated in the Mopani District Municipality of the Limpopo province in South Africa. His debut studio album Skeleton Move received rave reviews and won several awards including an AFRIMMA Award for Best Artist/Group in the African Electro category. He is also known as the pioneer of “Bolobedu” dance.

His second studio album Jerusalema was released in 2020 and featured prominent singers like Nomcebo and Burna Boy. The album also had the international successful single, Jerusalema.

Master KG can indeed be listed on the top league of South African artists. He recently walked away with the Global Record of the Year award at the Global Music Awards.

Kgaogelo Moagi is named in Y! Africa’s list for the most inspiring persons on the continent.