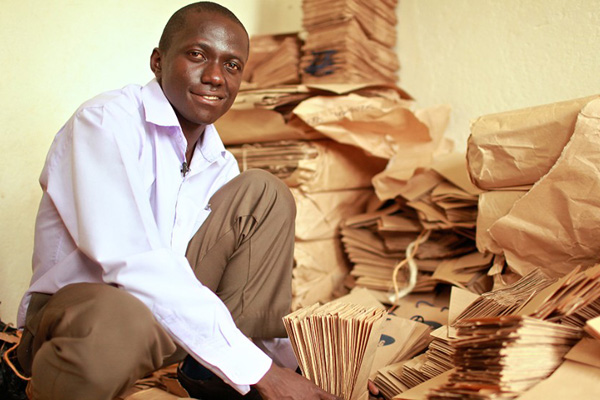 Also called the ‘Paper Bag Emperor,’ he started out in 2008 at age 16 while in high school, upturning a difficult situation to his favour. He had studied the market, seen the needs, possible demands and the Ugandan government’s plan to stop the use of plastic bags was the juggernaut.

2. Mupuya is the recipient of several awards, including the $30,000 Anzisha Prize in 2012, a major award given to young African entrepreneurial leaders who take the initiative to address critical needs in their communities.

3. He was the Winner, The Future Awards Africa Tony O. Elumelu Prize In Business, 2014.

4.  He says, “My vision is to have a cleaner Africa by eradicating use of plastic bags and emphasis on paper recycling,” he says. “I dream of having a big plant where I am able to supply paper bags all over Africa,”

5. He was named one of Forbes’ “30 under 30” in both 2013 and 2016. The list highlights entrepreneurs under the age of 30 who are on the way to achieving great things within their chosen industries.

6. Mupuya explains that he has much grander plans for YELI, stating that he is, “putting emphasis on sensitising about environmental conservation.”

7. With the proceeds from the business, Mupuya was able to see himself through Makerere University where he obtained a degree in Commerce. Besides supporting his family by setting up a YELI distribution outlet for his mother in Mbale, Uganda, he has also trained over 1,000 youth on paper bag production techniques and helped set up a good number of them with similar projects.

10.  There’s no stopping him as he says, “I have gone back to 0 many times but times but I haven’t stopped.” Do you stop at the slighest challenge?

Andrew Mupuya is the future!