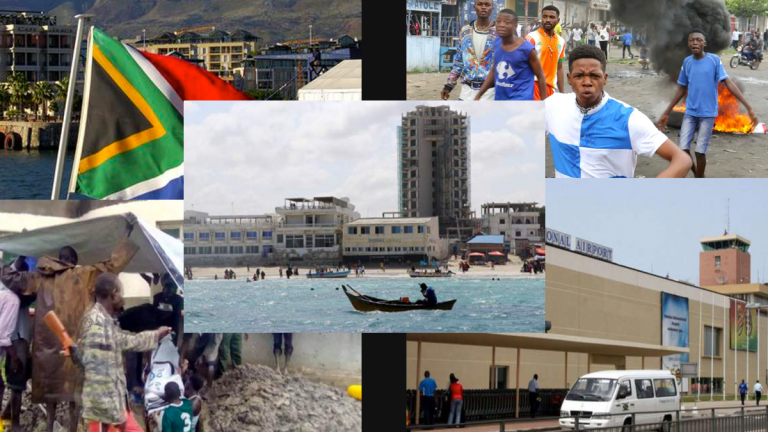 Suspected Islamist militants have attacked a hotel on the beachfront in the Somali capital Mogadishu.

A loud explosion at the Elite hotel on Lido beach was followed by gunfire, amid reports that government forces were fighting the attackers.

The hotel is popular with local politicians and Somalis from the diaspora. Eyewitnesses have spoken of stray bullets hitting the beach.

Go deeper: Somali President, Mohamed Abdullahi Farmajo issued a statement condemning the “heinous and cowardly” terrorist attack.“The main purpose of the ambush attacks by the terrorists is to discourage the Somali people who are recovering from difficult circumstances,” he said. “It is a fact that their plan is to harm every Somali through some misguided Somali youth.”The president issued his condolences over the victims of the attack and wished a speedy recovery to the wounded.

Attacks by the jihadist group, al Shabab, have been extremely frequent. Last Monday, 20 people died during an outbreak of violence at Mogadishu’s main prison which officials say was started by detained al Shabab fighters. Two days earlier a suicide bomber targeted an army base killing at least eight soldiers.

Crime in South Africa dropped by up to 40% during the first three months of its lockdown, official figures show.

The police minister said most types of crimes went down between April and June – including sexual assault and arson.

He added that a controversial alcohol ban during the coronavirus lockdown had helped, but that attacks on liquor stores had increased in the pandemic.

“These statistics show major decreases in all crime categories compared to the same comparative period last year,” he said. “A 40.4% decrease in the number of rape cases were reported during the three months.”

Go deeper: South Africa has among the world’s highest crime rates. It has recorded over half the Covid-19 cases in Africa. It is only normal that strict measures are put in place to curb the spread of the virus which included the alcohol ban. Other countries took the same cue, Malawi for example. More than 500,000 infections and 11,000 deaths have been reported in the country.

Two weeks ago, The South African Police Service, with Stats SA, published the country’s crime statistics for 2019/20, showing which types of criminal activity have increased – and decreased – in the past year. The stats cover 21 crime categories – 17 of which are reported by the public, and four of which are as a result of police activity.

In the 17 categories of community reported crimes, cases of carjacking have seen the biggest increase year-on-year, with the SAPS reporting 18,162 cases over the period. This equates to 50 cars being stolen in South Africa every day.

This was the only crime category to see double-digit growth, with the next largest increase seen in robberies at non-residential premises – up 3.3%.

The biggest reduction in crimes were seen in bank robberies (where no such crimes were recorded), cash-in-transit heists (down 10.4%), and instances of arson (down 7.3%).

Thirty-three people who were killed during an attack on a Cathedral in South Sudan have been buried in several mass graves.

Moses Anur Ayom, an Anglican Bishop of the Episcopal Church, said St Luke’s Cathedral – east of the state capital, Bor, was attacked two weeks ago by youth from the Murle ethnic group.

The Dean of the Cathedral, Reverend Daniel Garang Ayuen, was killed and the building badly vandalised.

Go deeper: At least 81 soldiers and civilians were killed as the authorities carried out a plan to try to reduce the number of weapons in circulation in a country recently pummeled by civil war. The efforts to disarm communities in South Sudan is an attempt by the authorities to tackle insecurity and stem retaliatory attacks in a country fractured along ethnic lines. But aid groups had cautioned that the “top down” approach, instigated by a government viewed with suspicion by many in the country, was likely to fuel clashes.

Ghanaian President Nana Akufo-Addo has said the country plans to resume international flights by 1 September after a dip in active Covid-19 cases.

But resumption of international flights will depend on the country’s capacity to test all passengers arriving at its main airport for coronavirus, he said in a televised address on Sunday.

About 24,500 passengers arrive at the Kotoka International Airport every week.

The authorities are considering adopting a rapid testing system at the airport. The director general of Ghana Health Service has said that a simulation exercise will be carried out this week.

Domestic flights are already operating in the country.

President Akufo-Addo on Sunday also announced that tertiary institutions will reopen from next week.

Ghana has recently recorded a significant reduction in the number of Covid-19 cases.

Go deeper: Ghana has so far conducted 427,121 Covid-19 tests, with 42,532 positive cases and 231 deaths. Ghana ranked 4th on the list of the highest coronavirus cases in Africa as at August 6, 2020. Ghana planning to resume international flights means that Africa can boast of being effective in managing the spread of the coronavirus.

It seems most countries are easing lockdown situations and that can only mean one thing, there’s confidence in managing the virus, which is something to be lauded.

Twelve people have been killed in three days by militia in Beni region in eastern Democratic Republic of Congo, local officials have told AFP.

The Allied Democratic Forces group attacked an army position in the village of Mwenda on Saturday night, killing eight people, local administrator Donat Kibwana is quoted by the news agency.

Four farmers were killed in their fields in the neighbouring village of Mbau on Friday, AFP quotes deputy administrator for the Beni territory Richard Kivanzanga.

Two Congolese soldiers were wounded in a clash with the ADF in Kpolowu village on Saturday, according to army spokesperson in Beni area Antony Mualushayi.

Go deeper: The ADF, a mainly Muslim movement that originated in Uganda in the 1990s, has been blamed for more than 1,000 civilian deaths in the Beni region of North Kivu province since 2014.

This is happening amidst the UN report that says Millions of lives could be lost to hunger in the Democratic Republic of the Congo (DRC), amid escalating conflict and worsening COVID-19 transmission, the UN emergency food relief agency has warned, urging the international community to step up support for the African nation.

Criminal gangs have kidnapped for ransom at least 170 people near the Virunga National Park in the Democratic Republic of Congo between April 2017 and March 2020. Small groups armed with guns and machetes have beaten, tortured, and murdered hostages, raping women and girls, who make up more than half of them, while using threats to extort money from their families.

Congolese law enforcement should take steps to dismantle the criminal gangs and arrest those responsible for the kidnappings and sexual violence in the Bukoma area of Rutshuru territory in North Kivu province. The United Nations peacekeeping mission in Congo, MONUSCO, which has a field base within a 10-kilometer radius of the agricultural fields and areas where most kidnappings have occurred, should protect civilians by actively patrolling in high-risk areas, consistent with its mandate.