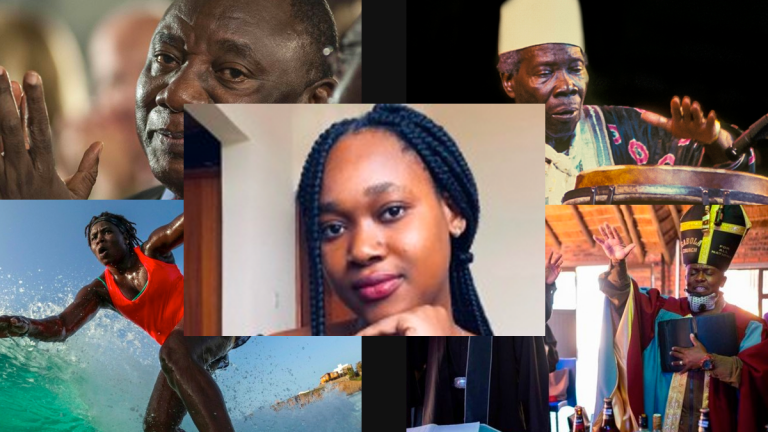 Technology entrepreneur, Charlette N’Guessan from Ghana, just won the 2020 Royal Academy of Engineering Africa Prize for engineering innovation. She is the first woman to win the prize and the first winner from Ghana.

Charlette is 26 years old. Alongside her team, they invented “Bace API” which uses facial recognition and artificial intelligence to verify people remotely. It involves making use of short videos or live images taken on phone camera to distinguish if an image given is of a real person or just an existing image.

She won $33,000 for the top prize. The vote was carried out by a live audience during the virtual ceremony held on Thursday.

Over the week, there has been a series of significant events across the continent and beyond. Here is a few of them:

In bunny’s Tavern, Evaton, south Africa, an unusual church service held to celebrate the end of the country’s ban of alcohol

On Saturday KhoiSan people wave in harmony with a protest by bikers against farm murders in Pretoria, South Africa.

On Monday journalists protest in Algeria to request the release of their colleague Khaled Drareni, who was sentenced earlier this month to three years in jail for “inciting an unarmed gathering” and “endangering national unity”.

On Tuesday Sudan’s exiled President Omar al-Bashir appears in court at the start of his trial over his connection with the 1989 coup.

According to the World Health Organization, South Africa is no longer among the five countries dangerously affected by coronavirus.

South Africa has been registering fewer new cases daily in comparison to Peru with 630, 595 and 663,437 cases, respectively.

South Africa remains the hardest hit in Africa, but it has consistently experienced a decline in new cases for six weeks now.

The head of Africa centers for disease control, John Nkengasong stated that, “Africa has experienced a downturn in cases for about a month, but it is too early to celebrate.”

Khadjou Sambe is a 25-year-old young lady who always questioned not seeing many ladies who surf. That birthed a desire in her to go surfing, representing Africa and Senegal.

Khadjou has not only been training but has also been coaching other girls and women. She trains them at Black Girls Surf (BGS) which grooms girls and women who want to participate in professional surfing

The surfer has vastly begun inspiring the next generation to confront the cultural norms and heed to the waves.

Khadjou lets us in on her childhood. She reveals that her parents refused to allow her surf for two-and-a-half years as a teenager, saying it brought shame to their family. but her drive was strong enough to cause them to have a change their minds. She finally began surfing when she was 14 years old.

“When I am in the water, I feel something extraordinary, something special in my heart,” says Sambe.

Nigeria: A drummer who set the beat for US civil rights

About 3 years before Three years before Rosa Parks’ bus boycott, Nigerian drummer Babatunde Olatunji protested racial segregation in the southern states of America. He was amongst a generation of Africans who fought for racial equality in the US.

He became a pioneering drummer, with 17 studio albums. Despite his musical legacy, he is a civil rights advocacy, but this part of him is less well known.

“He was committed to social activism throughout his life,” says Robert Atkinson who partnered with him on his autobiography The Beat of My Drum, which was issued two years after his death in 2005.

He won a scholarship to study at Morehouse College in Atlanta in 1950.  Here, he experienced challenges such as ignorance, stereotypes about Africa and racial segregation. He became accurately conscious of racism and started organizing students to challenge those laws.

“We started the protest quietly,” he later recalled of the incident. “We were part and parcel of the struggle for freedom in the early 1950s.”

Later, Olatunji became the president of the Morehouse Student body, which gave him the opportunity to meet many early civil rights leaders in the 1950s which includes Martin Luther King Jr.

“He saw himself as a pan-Africanist who always reached out to unify Africans and African Americans,” Olatunji’s widow, 89-year-old Iyafin Ammiebelle Olatunji, told the BBC.