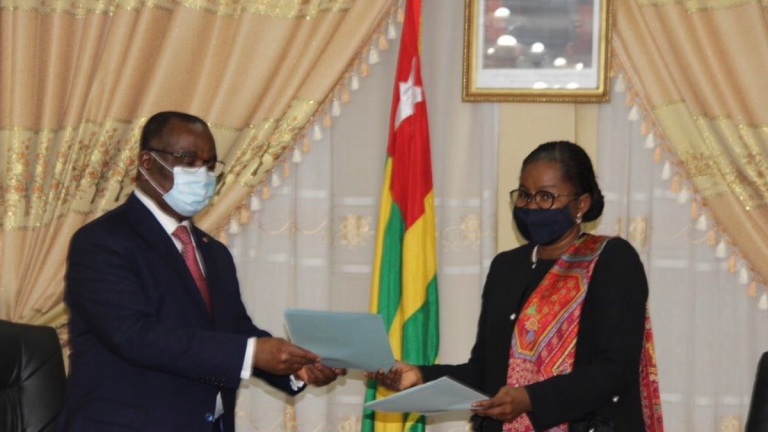 Togo has been due for a political reshuffle since Gnassingbe was reelected in February for a fourth term in office, but changes were delayed by the coronavirus pandemic.

She has served as the chief-of-staff of Togo since 2009.

In 2008, Victoire Dogbé Tomégah was at UNDP in Benin and was asked to manage the portfolio of Minister Delegate to the Prime Minister in charge of development at the base which had just been created in Togo by the President of the Republic Faure Essozimna Gnassingbé and the Prime Minister Gilbert Houngbo.

In 2010, Tomegah Dogbé was previously the Minister of Grassroots Development, Handicrafts, Youth and Youth Employment in the Komi Sélom Klassou Government and the Cabinet Director of President Faure Essozimna Gnassingbé.

On April 2015, after the presidential election, Komi Sélom Klassou replaced Ahoomey-Zunu as prime minister on 5 June 2015. Klaassou went ahead to form his cabinet on June 28, 2015 in which Victoire Tomegah Dogbé still retained the Ministry of Development at the Base, crafts, youth and youth employment.

From the above, we can say she is a person of the youth, for the youth and wouldn’t have stayed this relevant if she was not excellent and proven herself to be indispensable.

She has to her credit the launch of several innovative projects in the areas of development, inclusive financing and volunteering.

The new head of government will have the delicate mission of managing the health crisis and implementing the economic recovery.

Congratulations Victoire Dogbe Tomegah, Togo will grow where she needs ‘to go’ because of you.

P.S. I love how Wikipedia helps with information most of the time.