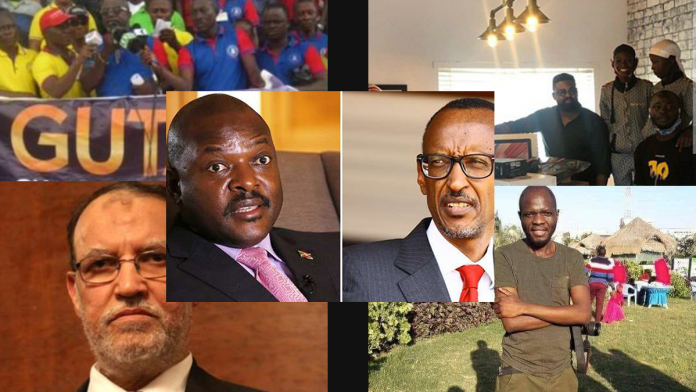 The Ikorodu Bois are known for remaking scenes from famous music videos and Hollywood films.

In a video shared on Twitter, the elated boys thanked Netflix for the production equipment.

Go deeper: In June, the Ikorodu bois remade the extraction movie and got an invite by the Russo brothers to attend the premiere of the movie. The video went viral and got the attention of important personalities.

Their consistency is worthy of emulation, and the recognition sells them off as youngsters not inclined to sit at home doing nothing.

A total of 46 foreign-owned retail shops have been shut in Ghana’s capital, Accra, because they were trading illegally, the Ministry of Trade and Industry has said.

Ghanaian law bars foreigners from engaging in retail business and the authorities have come under pressure to enforce it.

Last year, traders believed to be members of the Ghana Union of Traders Association (Guta) forcibly locked up foreign-owned shops belonging to Nigerians and Chinese residents in parts of the country.

The Nigerian Union of Traders Association in Ghana says about 80% of Nigerian-owned businesses in the country are licensed.

Go deeper: This sells the people behind these closures – and attacks – as xenophobic, especially when the excuse is based on hearsay and claims that ‘foreigners are taking over businesses’.

It is now a case of The Ministry of Trade & Industry against traders union. As much as the Ministry aims to put an end to illegal businesses, it’ll also do well to ensure reprisal attacks don’t happen, and the relationship of the countries don’t sour.

A leading member of Egypt’s Muslim Brotherhood movement, Essam al-Erian who is 66 has died in prison after suffering a heart attack. Arrested in 2013 following the overthrow of Mohammed Morsi’s government by the military, he was serving several life sentences at the Tora Prison in southern Cairo when he died, the reports say.

There has been no official announcement of his death, but it was reported by both pro-government and pro-Brotherhood websites.

Mr Erian’s lawyer confirmed his death to AFP news agency, saying: “The authorities notified me of his death, and I informed his family to arrange for receiving his body [for burial]. It was a natural death.”

Mr Morsi died in custody in June 2019, after collapsing in a courtroom.

Go deeper: It has become a thing for a ruling government opposition to be jailed in most African countries.

The 2013 Egyptian coup d’état took place on 3 July 2013. Egyptian army chief General Abdel Fattah el-Sisi led a coalition to remove the President of Egypt, Mohamed Morsi, from power and suspended the Egyptian constitution of 2012. The move came after the military’s ultimatum for the government to “resolve its differences” with protesters during widespread national protests. The military arrested Morsi and Muslim Brotherhood leaders, and declared Chief Justice of the Supreme Constitutional Court Adly Mansour as the interim president of Egypt. The announcement was followed by demonstrations and clashes between supporters and opponents of the move throughout Egypt.

The removal of Morsi from office by the coalition was a result of the above following protests, that were instigated by frustration with Morsi’s year-long rule in which Egypt faced economic issues, energy shortages, lack of security, and diplomatic crises.

Dr. Essam Mohamed Hussein el-Erian was an Egyptian physician and politician. He was the vice chairman of the Freedom And Justice party. Formerly he was a member of the Guidance Bureau of the Muslim Brotherhood. He was elected as a parliament member in the 2011–12 Egyptian parliamentary election. After the 2013 Egyptian coup, prosecutors ordered his arrest on 10 July 2013. On 14 July 2013, Egypt’s new prosecutor general Hisham Barakat ordered his assets to be frozen. El-Erian was arrested by the government on 30 October 2013.

Rwanda’s foreign minister has expressed doubts on the willingness of neighbouring Burundi to normalise diplomatic ties.

This comes after last week’s remarks by Burundi’s new President Évariste Ndayishimiye that his country “will never have relations with a country that uses irony” in its relations.

The refugees fled to Rwanda in 2015 during Burundi’s political crisis following a declaration by former President Pierre Nkurunziza that he would vie for a controversial third term.

The repatriation of the refugees has been a sticking point between the neighbours.

The two countries also accuse each other of harbouring their respective enemies.

Mr Biruta told journalists in the capital, Kigali, that Rwanda wants good relations with its neighbours – especially Burundi – but expressed “doubts” on the country’s willingness to normalise relations.

Go deeper: Burundi’s relations with its neighbours have often been affected by security concerns. Hundreds of thousands of Burundian refugees have at various times crossed to neighboring Rwanda, Tanzania, and the Democratic Republic of the Congo. Hundreds of thousands of Burundians are in neighboring countries as a result of the ongoing civil war. Most of them, more than 340,000 since 1993, are in Tanzania. Some Burundian rebel groups have used neighboring countries as bases for insurgent activities. The 1993 embargo placed on Burundi by regional states hurt diplomatic relations with its neighbors; relations have improved since the 1999 suspension of these sanctions.

If Rwanda has doubts, then the country has every right to.

Police in Ivory Coast have fired tear gas at opposition supporters protesting against President Alassane Ouattara’s decision to run for a third term in office.

Demonstrators defied a ban on protests, erecting barricades and burning tyres in the commercial capital Abidjan and elsewhere.

At least two people are reported to have been killed during clashes on Wednesday between the opposition and supporters of the governing party.

Go deeper: For weeks now, the issue of this third term has been in the news. If President Alassane Ouattara took over from President Coulibaly, that means whatever was agreed between President Coulibaly and the opposition still stands since it is the same party. Does the fact that it’s a new interim President negate the agreement already reached by President Coulibaly before his death? Or is this just an outright disregard for agreements made?

The members of the incumbent government might have a hand in urging President Outtara to insist on running just so that they maintain their seats and favours. Or maybe not.

Kenyan journalist Yassin Juma, who has been in detention in Ethiopia since last month, has contracted Covid-19, his lawyer Kedir Bullo has told me.

A federal court ordered his release on bail last week, but Addis Ababa police said they were still investigating charges against him and kept him in detention.

He was arrested with two Ethiopian journalists who have denied allegations after they have been accused of inciting ethnic violence and plotting to kill senior Ethiopian officials.

Go deeper: Kenya and Ethiopia are close when it comes to ranking in the cases of coronavirus in Africa with over 20,000 cases.

Journalists are a major target because of the views they hold regarding a certain government or official. Most times, they are protected if what they cover favors the government or arrested if what they put out in the media is against the government. This however, is one of those cases of the latter. Freedom of speech is what every country believes they stand on until speeches begin to seem against them. Then they do all that is within their capacity to shut every voice of opposition.

When are we going to understand that if you do what is right, you will not need to arrest anyone with an opposing view or stand? This is a question many African leaders must answer.