Y! For Africa Focused on Emerging Leaders and Culture Shapers
Home 54° Across Africa #54DegreesAcrossAfrica: Stonebwoy dreams of having a football club, Akon planning a ‘future’ city and other stories across Africa 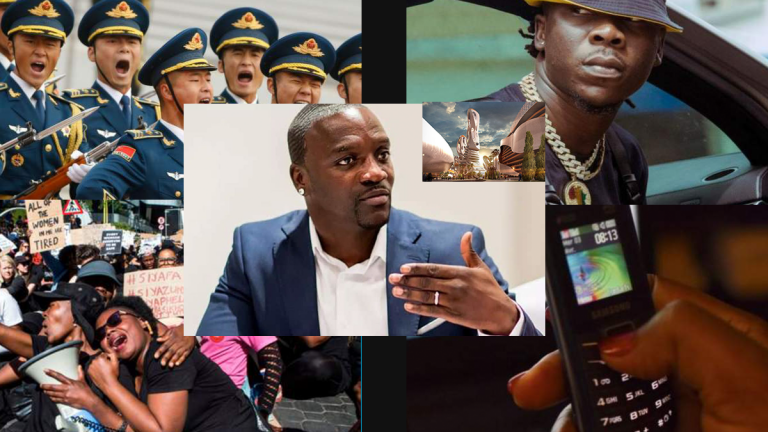 GHANA: Stonebwoy is open to having a football club

Ghana’s dancehall titan Stonebwoy is a big football fan whose only brother is training as a professional footballer and Stonebwoy himself was a keen player before music claimed him.

He was asked about his dreams of owning his own football team and he had this to say:

“It’s possible, who knows, let’s see how God works it out, because once it’s a thing that gives back to people and creates employment and makes people’s dreams come true, I’m all down for it.”

Like many highly successful African musicians, Stonebwoy is keen to use his wealth and influence and leave a positive legacy. Apart from releasing an album – Anloga Junction – and a single – Putuu – during lockdown, the pandemic has also been a time of reflection for Stonebwoy:

“I’ve had a lot of time to realize that we belong to the earth, the earth doesn’t belong to us. Corona didn’t just come naturally; it definitely came out of man’s reactions and stuff. So then I began to realize that the quest of mankind to do the most is just what is going to destroy us more. And these things started sinking in so I actually put them into my being and I became humbler, I became more real.” – Stonebwoy said.

Going further: The government cannot do everything no matter how much they claim to even though they might have the access to do a lot for its people. So when people like Stonebwoy have dreams like this, it only right that he is supported by the citizens who share the same vision and the government policies to back up the plan, and not frustrating efforts of well-meaning citizens.

President Cyril Ramaphosa has termed them as the “most far-reaching legislative overhaul in the fight against gender-based violence and femicide”.

The proposed changes seek among other things to create a new offence of sexual intimidation, allow for names of sex offenders to be publicly available and tighten the granting of bail to perpetrators of violence against women.

Domestic Violence Act will be changed to cover couples in “engagements, dating, in customary relationships, and actual or perceived romantic, intimate or sexual relationships of any duration”.

The amendments are a follow up on the president’s promise last year to change laws on domestic abuse.

Go deeper: South Africa has been battling issues with rape and violence against women for a while now. It is only right that these laws come to play and are enforced. But would they be enforced? Can a country truly curb violent acts by just laws or should it focus on something else like rehabilitating the hearts and minds of the people against violence.

When Akon, the Senegalese-American music sensation, first announced plans to build a futuristic city in Senegal, many assumed it was just a publicity stunt. Now that ground has been broken on Akon City, however, there is great speculation on how it will ultimately look, whether it will achieve its goals of sustainability, and whether a bitcoin-financed initiative is viable. Akon, the son of Senegalese parents who spent his early childhood in the West African nation, also hopes the project will provide much needed jobs for Senegalese and be a refuge for Black Americans and others facing racial prejudice. Akon’s project, which was first announced two years ago, has won him favor with Senegalese authorities who praise him for investing in Africa at a time of uncertainty in global tourism.

Go deeper: According to Forbes, the Senegalese-American hip-hop singer/songwriter/producer has been profiting from a range of business ventures this year. There’s his Konvict Clothing, his Pepsi soccer ad campaign, and Kon Live, his Interscope-backed imprint that’s home to Lady Gaga and others. Akon still has time for traditional musical ventures, including an international tour and a new album, Stadium Music.

It is great to see Akon do more than just music. We cannot help but see his heart for the people by his continuous quest for innovative ideas and this smart city is one of them.

China is considering setting up military bases in four African countries, according to a report by the US Department of Defense.

Kenya, Seychelles, Tanzania and Angola were mentioned among a dozen other countries where China is considering setting up bases.

The four African governments are yet to respond to the report.

The report that was published last week was widely reported over the weekend, with some of the countries where the bases are to be set up denying being in discussions with China.

“Beyond its current base in Djibouti, the PRC [People’s Republic of China] is very likely already considering and planning for additional overseas military logistics facilities to support naval, air, and ground forces,” the report says in part.

Go deeper: Why is China looking to set up military bases on the African continent? Having gone through the reason China set up a base in Djibouti, we can find out that China has stated that the facility will serve primarily to support military logistics for Chinese troops in the Gulf of Aden, and peacekeeping and humanitarian operations in Africa. It also bolsters the Chinese navy’s efforts to prevent piracy on high seas, and allows easy access for the PLA’s warships into the Arabian Sea, Persian Gulf and Indian Ocean.

A benevolent act? Or is China just flexing their power?

The authorities in Ethiopia have launched a mobile service which allows people to receive their coronavirus test results through an SMS.

The results will be available three hours after one is tested, the Ethiopian Public Health Institute director Meseud Mohammed said.

A short code 8335 will be used to send notifications with the results.

The country has so far conducted 970,591 laboratory tests for coronavirus.

Ethiopia currently has 55,213 confirmed cases of Covid-19 with 20,283 patients having recovered.

The country has recorded 856 fatalities from the virus.

Observation: It’s great to see African countries having this initiative to reduce the amount of time people spend in commuting to get their test results.