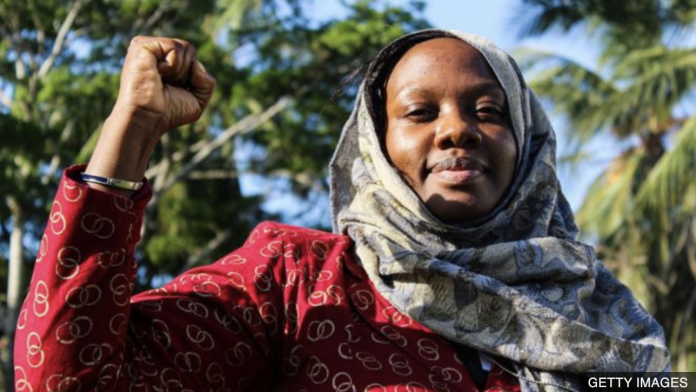 Award-winning Zimbabwean author Tsitsi Dangarembga, a nominee for this year’s Booker Prize, has been released on bail after her arrest on Friday during an anti-government demonstration.

She and Fadzayi Mahere, spokesperson for the opposition Movement for Democratic Change (MDC) party, appeared in court Saturday, on charges of inciting public violence and unnecessary travel during the coronavirus lockdown.

They were arrested in separate incidents near their homes during solo or small demonstrations denouncing alleged human rights abuses and corruption. But the two women were in good spirits during their court appearance in the capital, Harare, but complained of squalid and unsanitary conditions in prison.

This is a clear indication that African governments have zero tolerance for criticism or counter arguments to their decisions. A practice that has become continental and is now a norm.

Go deeper: Freedom of speech – and movement – is only written in Constitutions in Africa for the sake of it. This freedom is being trampled upon whenever there is an attempt to counter government policies and actions.

Tsitsi has now been released on bail and she had this to say in a tweet she posted hours ago:

After a decade of campaigning, Kenyan environmental activist, Phyllis Omido won a court ruling that awarded $12 million (£9.2m) to a community poisoned by lead pollution from a nearby factory.

When, in 2009, Omido explained to her employer that their business of battery recycling could “end up killing” the people living near the plant, she was asked never to talk about it again.

At 31, the business management graduate had just joined Kenya Metal Refineries, a firm in the coastal city of Mombasa which was recycling car batteries to extract the lead.

Go deeper: We can only begin to imagine the number of people who have kept quiet in similar situations. It may not be about lead poisoning, but other things that have the potential to put the lives of people living in a particular area in danger.

When anyone tries to speak out, they are shut up just before it becomes public and damages are done almost beyond repair when it eventually gets to the public. If only we could do better as a people in Africa and respect the lives of others.

Kenya to send officials to Beirut consulate after CNN report on allegations of abuse, exploitation

Kenya’s embassy in Kuwait, which oversees the country’s consulate in Lebanon, will send officials to Beirut during the first week of August, Chief Information Officer at Kenya’s Ministry of Foreign Affairs Jane Kariuki told CNN.

All of the witnesses said Chalouhi and Jaber regularly overcharge Kenyan women for consular fees.

At least one Kenyan woman was arrested by Lebanese police at the consulate after an altercation with Chalouhi, according to the woman, witnesses and a police report.

Many Kenyan migrants in Lebanon are domestic workers who are sponsored to be in the country under the controversial Kefala system, a form of indentured servitude which ties the woman’s immigration/residency status to a live-in work contract.

Backstory: It was reported last week how Kenyan women seeking to return to their country have been allegedly abused and exploited by the Kenya’s Consul in Lebanon.

Today’s headline is encouraging. Looking out for citizens home and abroad is paramount. This move by the Kenyan officials sent to investigate this allegation of abuse and exploitation is one to be lauded.

Final year students in secondary schools in South Africa will on Monday resume classes after a one-week break.

President Cyril Ramaphosa closed all schools last week to limit the spread of coronavirus after a surge in cases among learners, but said they will be gradually reopened over three weeks.

Other learners will resume classes on 24 August

Education department spokesperson told local TV channel eNCA that the break had enabled the authorities to tighten measures to prevent the spread of coronavirus in schools:

Go deeper: South Africa’s cases of COVID-19 has been reported to have crossed the half a million mark; the highest in Africa so far. So, opening schools has created two sides – one saying it is a wrong move, considering measures taken to prevent the spread of the virus among the students, and the other arguing that students should not be left at home for too long; citing lack of political will to create opportunities for the students to continue their education from their homes.

But, this is an African-wide problem. It is, indeed, a continent with inadequate infrastructure to push forward eLearning as much as it should. We would have to first understand how to go around internet issues, epileptic power, eLearning materials like tabs or laptops, etc.

Following months of speculation that Ivory Coast’s ex-President Laurent Gbagbo might return to the country to run for office again, his political party has chosen a different candidate for October’s election.

Gbagbo lives in Belgium, after being acquitted of war crimes by the International Criminal Court (ICC) last year.

The Ivorian Popular Front says it has instead selected Gbagbo’s former prime minister, Pascal Affi N’Guessan, as its candidate.

The election is seen as the biggest test of the country’s stability since a civil war 10 years ago.

It was sparked by Gbagbo’s refusal to step down following a disputed run-off election.

October’s vote is still likely to be a controversial vote as the incumbent, Alassane Ouattara, is expected to stand even though his opponents say the constitution bars him from a third term. Former President Henri Konan Bedie is also a candidate.

Go deeper: For a country trying to be stable since her civil war, having an aspirant with a questionable past is not one any part should be putting forward. Not just for the good of the country, but for the region.