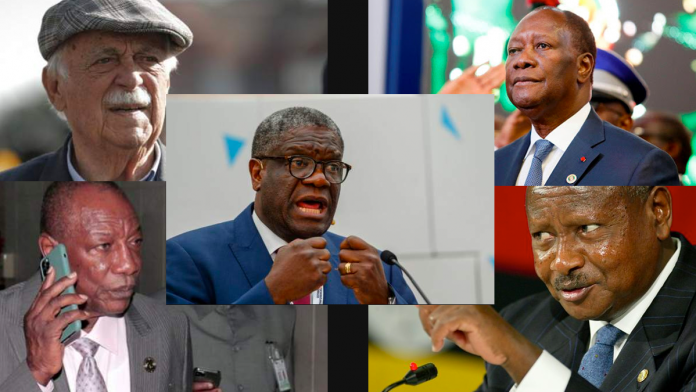 Museveni: How to win friends and influence the youth

Yoweri Museveni, Uganda’s septuagenarian president, has been speaking about the strategy he uses to win over young people on social media – including those who “abuse me, saying you are very stupid”.

His strategy, he said, was to stay engaged in robust debates so as to convince his critics.

“I don’t have to fight with these children to win them over, and when I send messages to answer them when there were 10 who were attacking me, only six remain, four answer back saying the old man has made a good point.”

Mr Museveni has ruled Uganda since 1986 and will stand for a sixth term in next year’s election.

Among those planning to run against him is musician-turned-politician Bobi Wine, 38, who is popular with the youth.

Guinea’s constitutional court, the highest in the West African country, has approved 82-year-old President Alpha Condé’s bid for a third term in next month’s election.

There have been months of protests against Mr Condé’s re-election bid after he pushed through a constitutional change in a referendum in March which allowed him to stand for a third term.

At least 30 people are reported to have died from the protests.

On Tuesday Nigeria’s President Muhammadu Buhari had called on West African leaders to stick to their constitutional term limits – which he termed as a source of crisis and political tension in the region.

Mr Bizos rose to prominence as a lawyer who represented the Rivonia Trialists, including Nelson Mandela.

Mr Bizos played a part in many of the key moments which formed South Africa’s democracy.

Born in 1927 in Greece, Mr Bizos arrived in South Africa as a World War II refugee with his father in 1941.

He wanted to study medicine, but his application was rejected, so he opted for a law degree. And that ignited his political activism, as a ferocious opponent of apartheid.

As a lawyer, Mr Bizos represented many high profile political activists. He was part of the team of lawyers at the Rivonia Trial which saw Mr Mandela and other top ANC colleagues sentenced to life imprisonment in 1964.

Mr Bizos is credited with adding the crucial words “if need be” to Mr Mandela’s famous speech at the trial, in which he said he was prepared to die for the struggle.

In his later years Mr Bizos led the enquiry into the Marikana Massacre that saw the killing of 34 mine workers by South African police in 2012.

South Africa’s President Cyril Ramaphosa said it was a very sad moment for the country, that Mr Bizos would be sorely missed, but that South Africans would forever remember his contribution to democracy.

Ivory Coast’s former ruling party, the Democratic Party of Cote d’Ivoire – African Democratic Rally, has threatened to boycott October’s general elections if conditions to make them fair and transparent are not met.

He said the party’s presidential candidate, Henri Konan Bedie, will be formally presented to delegates on 12 September in Yamoussoukro, the country’s political capital.

Ivory Coast’s President Alassane Ouattara is running for a controversial third term in the polls.

Former President Laurent Gbagbo and former rebel leader Guillaume Soro were barred from vying because of a new rule that blocks those convicted of a crime from seeking electoral positions.

Nobel Peace Prize winner Denis Mukwege has been placed under the security of United Nations forces in Democratic Republic Congo after death threats against him.

Dr Mukwege won the 2018 Nobel Peace Prize for his work in treating rape victims in the conflict in eastern DR Congo.

He was threatened after calling for justice over serious human rights violations in the country’s eastern region.