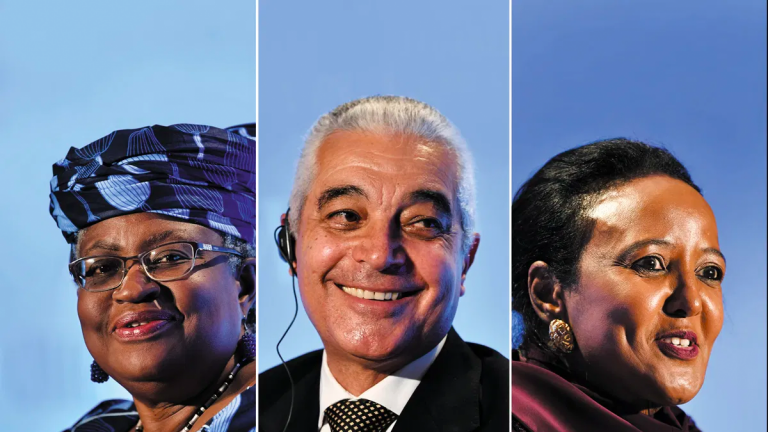 Three of the eight candidates to become the next Director General of the World Trade Organization (WTO) are from Africa.

What is a Director General’s role?

It is primarily one of an administrator, an African leader could help ensure that the interests of the continent are taken into account in WTO activities.

Trade talks may seem secret and take place behind closed doors, but their outcome can affect everyone’s lives. Talk about the small trader who crosses a border several times a month, to the consumer buying an imported item in a market, to someone with a job in a manufacturing industry: they are all affected by the rules of trade. In Africa, trade is viewed as a driver of growth, a way towards sustainable development and as a tool for poverty eradication.

David Luke, head of the trade policy centre at the UN’s Economic Commission for Africa said trading is what will do it for Africa.

Ms Okonjo-Iweala, a former finance minister, a current contender for the role of the DG WTO had this to say “I want to figure out how to get women and youth, who are behind these engines of growth in Africa, to benefit more from world trade”. She was also keen to make sure that the continent moves away from exporting raw materials and instead “adds value to the goods or products we produce for the global market.

Ms Amina Mohamed, who has served as both trade and foreign minister in Kenya, and also a contender said she can bring a “fresh perspective” that is “broad [and] inclusive” to the job. She mentioned that she did want to be judged “just as an African leader or a woman leader, but as an experienced leader [and] a consensus builder”.

Mr Mamdouh, who has been negotiating on behalf of Egypt at the WTO since 1985, said his vast experience at the trade body will enable him to see how it can help the continent further. “My agenda for Africa would be to integrate Africans more into the trading system,” he said. “I will also call upon political leaders in African countries to pay particular attention to their trade policies.”

This shows that Africans are doing something right. If out of the 8 candidates, there are 3 African representatives, then that is something to beat our chest about. But when we consider the enormous responsibility that comes with it, we hope for that whoever wins is the right fit, African or not.