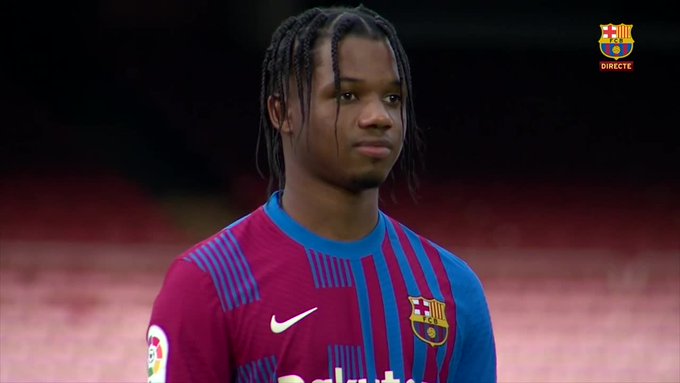 Spanish giants, Barcelona, have released their statement home strip for the 2021/22 season. The shirt makes use of the St. George Cross, representing the patron saint of Barcelona and the Senyera (the striped Catalan flag) – two elements that define both the club’s identity and its close links to both the city and the country, according to a statement.

The shirt, launched with Ansu Fati front-and-centre, has been re-imagined in Barcelona’s famous Blaugrana colours, while the club’s traditional vertical stripes have been changed. The Barcelona logo appears very visibly on the left of the chest, with a Nike logo on the right. There’s a Catalan flag on the back, just below the neckline, with the UNICEF logo featuring as well as the men’s main partner, Rakuten, and the women’s, Stanley.

Anssumane “Ansu” Fati Vieira (born October 31, 2002) is a Spanish professional footballer who plays as a forward for Barcelona and the Spain national team.

He was born in Guinea-Bissau but represents Spain internationally. He is widely considered one of Spain’s most exciting football talents, and one of the best young players in the world.

After representing local side Herrera and the youth teams of Sevilla, Ansu joined Barcelona’s La Masia in 2012, aged ten.

On July 24, 2019, Ansu signed his first professional contract with Barcelona, agreeing to a deal until 2022.

On August 31, 2019, he scored his first professional goal in a 2–2 away draw between Barcelona and Osasuna at 16, becoming the Barcelona senior team’s youngest goalscorer ever and the third-youngest scorer in the history of La Liga.

On September 23, 2020, he was officially promoted to the first team.

Ansu was originally eligible to represent Guinea-Bissau at international level but decided against it, and the Royal Spanish Football Federation (RFEF) showed interest in him, with Diario AS reporting that the Spanish government had set its sights on granting Fati citizenship with a view to including him in the squad for the 2019 FIFA U-17 World Cup.

He was granted Spanish citizenship on September 20, 2019.

Anssumane “Ansu” Fati Vieira is on the list of the Most Inspiring Youth on the Continent – Africa 500.