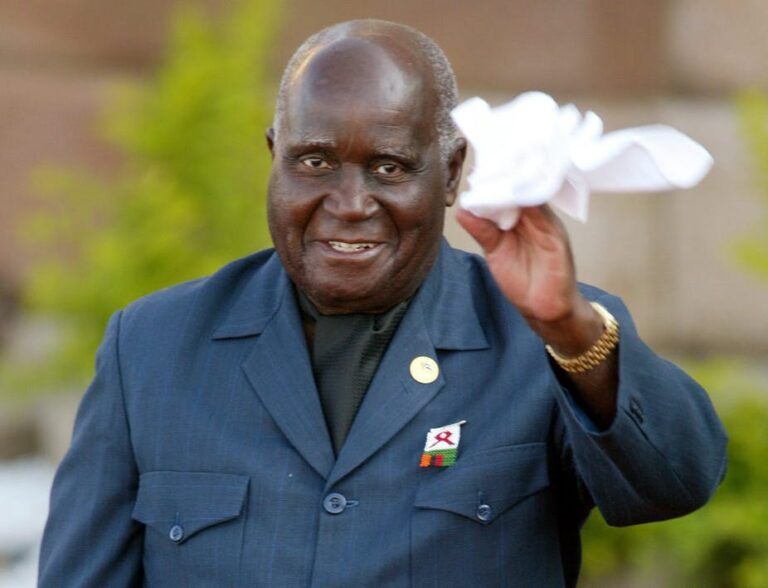 These are the top news stories across Africa.

The Chairperson of the African Union Commission, Moussa Mahamat, has mourned the death of the first President of Zambia, Kenneth Kaunda, describing him as one of Africa’s finest sons.

Mahamat disclosed this in a statement released on Thursday which reads:

“It is with an indescribable sense of loss that the Chairperson of the African Union Commission, Moussa Faki Mahamat learnt of the passing of H. E. Kenneth Kaunda, the first president of the Republic of Zambia and one of the Founding Fathers of the Organisation of African Unity.

“Africa has lost one of its finest sons. He embodied the true sense of Pan-Africanism, placing his own country Zambia at grave risk in order to provide safe harbour for the liberation movements of Southern Africa as well as its peoples.

Tributes have been pouring in across Africa and the world for Kaunda who was Zambia’s founding father and ruled for 27 years from 1964 after the country gained independence from Britain. – According to Punch

The World Health Organisation (WHO) has said that Africa is currently experiencing a third wave of the COVID-19 pandemic.

WHO regional director for Africa, Matshidiso Moeti, disclosed this at a media briefing on Thursday, June 17.

The development comes amid concerns over new variants of COVID-19, said to be responsible for increased infection rates.

According to her, “Africa is in the midst of a full blown third wave. The sobering trajectory of surging cases should rouse everyone into urgent action. We’ve seen in India and elsewhere just how quickly COVID-19 can rebound and overwhelm health systems. So public health measures must be scaled up fast to find, test, isolate and care for patients and to quickly trace their contacts.

“The rise in cases and deaths is an urgent wake up call for those countries lagging behind to rapidly expand vaccination sites, to reach priority groups for vaccination and to respond to community concerns. – The Cable

A civil society figure in Niger Republic, Ahmed ‘Korondi’ Ekrou has been sentenced to six months in prison, two of which were for criticising gendarmes engaged in the anti-jihadist struggle.

“This Tuesday, June 15, 2021, the High Court (TGI) of Diffa sentenced the civil society actor, Ahmed Ekrou known as Korondi, a member of the Citizens’ Watch Committee, to six months in prison, two of which are firm, and a fine of 1,000,000 FCFA (1,846 euros),” Kaka Touda, a member of a Nigerien NGO reportedly said.

The activist is accused of “disseminating a message disturbing public order” and “offending human dignity” for having criticised gendarmes involved in the fight against jihadists in the Diffa region (southeast), said Mara Mamadou, another civil society leader.

The Citizens’ Watch Committee is a grouping of civil society organisations, associations and unions created in 2015 “to coordinate the struggle and the defense of human rights in the region of Diffa,” according to Mara Mamadou. – Africanews

On Thursday, June 17, Rwandan prosecutors called for a life sentence for Paul Rusesabagina, the man who inspired the film “Hotel Rwanda” as he faces terrorism charges.

Rusesabagina, once praised for saving hundreds of Tutsis from the 1994 Rwandan genocide as a hotel manager, faces charges related to attacks by an armed group inside Rwanda in 2018 and 2019.

The nine counts put against him include: “forming an irregular armed group,” “belonging to a terrorist group” and “financing terrorism,” as prosecutors seek to link him to activities that killed at least nine people.

Rusesabagina, a Belgian citizen and U.S. resident, has denied the charges, saying his case is politically motivated in response to his criticism of Rwanda’s longtime president, Paul Kagame. – According to Africanews

A 1098-carat diamond believed to be the third largest gem-quality stone ever to be mined has been discovered in Botswana, according to a joint venture between Anglo American’s De Beers and the government.

The stone was presented to President Mokgweetsi Masisi on Wednesday, June 16, by Debswana Diamond Company’s acting managing director, Lynette Armstrong, and it is believed to be the third largest in the world behind the 3,106-carat Cullinan stone recovered in South Africa in 1905 and the 1,109-carat Lesedi La Rona unearthed by Lucara Diamonds in Botswana in 2015.

“This is the largest diamond to be recovered by Debswana in its history of over 50 years in operation.”

“From our preliminary analysis it could be the world’s third largest gem quality stone. We are yet to make a decision on whether to sell it through the De Beers channel or through the state owned Okavango Diamond Company,” Armstrong said.

Minerals minister, Lefoko Moagi, said the discovery of the yet-to-be named stone could not have come at a better time after the onslaught of the pandemic hit diamond sales in 2020. – Reuters reports