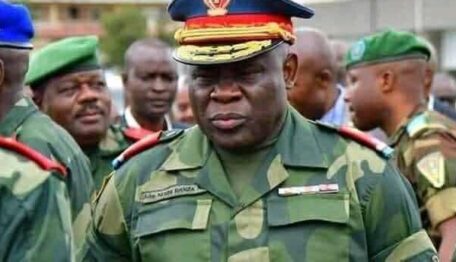 General Numbi has been named a suspect in orchestrating the killing of Floribert Chebeya, whose body was found in his car on the outskirts of the capital city of Kinshasa in June 2010.

According to reports, Chebeye, head of the Voice for the Voiceless (VSV) group, was summoned to a police station to meet General Numbi, a day before the murder.

According to reports, the EU described the sanction as a signal and strong determination as a stand up for human rights and taking tangible action against those responsible for violations and abuses.

“In South Sudan, the sanctioned individual is Gabriel Moses Lokujo, who has been responsible for grave human rights violations connected to his defection followed by attacks on civilians,” parts of the statement reads.

The country’s apex court heard the commission’s bid on Thursday, March 25, 2021, during a virtual sitting.

According to the UN report, men were also forced to rape their family members.

“Women say they have been raped by armed actors, they also told stories of gang rape, rape in front of family members and men being forced to rape their own family members under the threat of violence,” Wafaa Said, deputy UN aid coordinator in Ethiopia, said in a briefing to UN member states in New York.

Thousands of foreign mercenaries have supported opposing sides in the civil war that followed the removal of the Libyan leader Colonel Gaddafi in 2011.