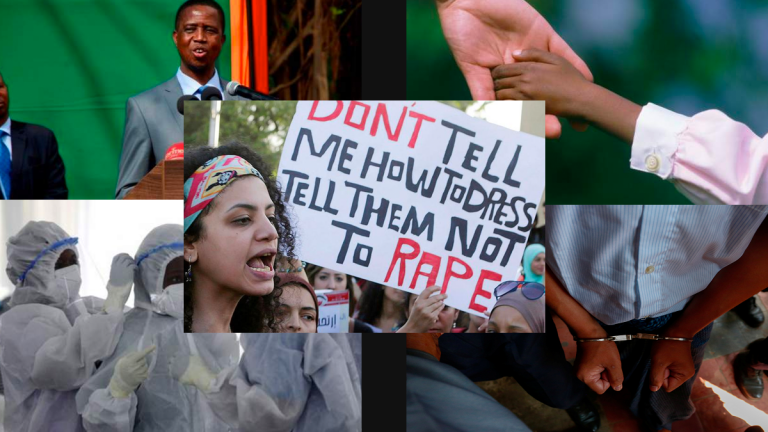 The Egyptian parliament has approved a law that will protect the identity of women who come forward to report cases of sexual harassment or assault.

Research suggests that abuse is widespread in Egypt, but it is believed that women often fear that if they file complaints they themselves will be blamed.

The new law was proposed in July following a rare social media campaign in which a male student was accused of raping or harassing multiple women. He was later arrested.

The case inspired many more women to come forward and share experiences of violence and abuse they had endured.

Go deeper: Rape is one of the most common crimes in Egypt. Marital rape is not illegal in Egypt. By 2008, the U.N. quoted Egypt’s Interior Ministry’s figure that 20,000 rapes take place every year, although according to the activist Engy Ghozlan (ECWR), rapes are 10 times higher than the stats given by Interior Ministry, making it 200,000 per year. Mona Eltahawy has also noted the same figure (200,000), and added that this was before the revolution, and that today the number is actually higher.

Rapes are usually not reported in Egypt, due to the fear of social rejection, and culturally it is not accepted.

Other African countries can take a cue from this. Women should feel safe when they report cases of rape without feeling stigmatized.

Zambia’s leader says that the corruption fight is political

Zambia’s President, Edgar Lungu has accused the Anti-Corruption Commission (ACC) of having designs to dislodge him from power.

The president said that the fight against corruption is anchored on politics and that those fighting are only trying to get rid of the government and those doing well.

Mr Lungu’s government has been accused of corruption, with some of his ministers summoned by the anti-corruption commission for questioning.

A Zambian watchdog writer had this to say, “Lungu should not hold Zambia at ransom for fear of losing power. He does not own this country. He was given its stewardship by us through our Constitution and he will leave power through the same Constitution. He cannot start dismantling the ACC or other constitutional institutions in order not to engender regime change. Regime change in a democracy is inevitable. Therefore, since article 4 part 3 of the Constitution establishes our nation as a multi-party democracy regime change is our constant and anyone who gets into power should be ready to leave. There is no other pinnacle to go to, but out, after getting into power. The President further swore to defend the Constitution and yet he is disparaging the same Constitution he swore to defend.”

Corruption thrives in a society of instant gratification in which hard work and thriftiness is frowned upon.

Does the ACC have a point?

There’s a claim that President Lungu has never explained to Zambians how his net worth jumped from K2 million in 2015 to K23 million in 2016.

The US government has filed fraud and money laundering charges against those behind an adoption scheme that placed Ugandan children who were not orphans with US families.

Two Americans, Margaret Cole and Debra Parris, and a Ugandan lawyer, Dorah Mirembe, are accused of conspiring to corruptly procure the children and transfer them to American adoptive parents, making hundreds of thousands of dollars in the process.

The Ugandan children were allegedly removed from their families with a promise that they would be enrolled in special education programs in the United States.

Instead they were presented to courts as orphans for adoption by Americans.

The US Treasury has imposed economic sanctions on the Ugandan lawyer, her husband and two Ugandan judges, who allegedly took bribes to sign off on the adoption cases.

Go deeper: According to the US Department of State – The Bureau of Consular Affairs, under the INA 101(b)(1)(F), a child can be considered an orphan because of the death or disappearance of, abandonment or desertion by, or separation or loss from both parents, or in the case where there is a sole or surviving parent who is incapable of providing the proper care and has in writing irrevocably released the child for emigration and adoption.

In addition to qualifying as an orphan under U.S. immigration law, the child must meet the following requirements of Uganda:

Age of Adoptive Child: The adoptive child(ren) must be under the age of 18. Children who are 14 years old or older must consent to the adoption.

Sibling Adoptions: Sibling adoptions are possible and do not have any unique requirements.

Relinquishment: The consent of both biological parents, if known, must be obtained and may be withdrawn prior to the pronouncement of the adoption order. The court also has the authority to require the consent of any person who has legal or customary responsibility for the child. However, per Article 47(2) of the Children Act, the court may dispense with parental consent if the parents are not capable of giving consent.

Abandonment: The probation and social welfare officers in the Ministry are responsible for certifying a child as abandoned in accordance with Ugandan law.

Caution: Prospective adoptive parents should be aware that not all children in orphanages or children’s homes are eligible for adoption. In many countries, birth parents place their child(ren) temporarily in an orphanage or children’s home due to financial or other hardship, intending that the child return home when possible. In such cases, the birth parent(s) have rarely relinquished their parental rights or consented to the adoption of their child(ren).

Why at the expense of vulnerable children will this kind of situation be taken advantage of?

Kenya’s Health Ministry has dismissed an exposé that alleged massive looting and disappearance of millions of dollars of donor funds and equipment meant to help the country contain the spread of COVID-19.

An investigation by a local television station claimed that more than $400m (£304.5m) worth of donations could not be accounted for as COVID-19 cases continue to surge in the country.

Kenyan health workers have threatened to go on strike due to a lack of protective equipment.

The investigation alleged that well-connected individuals, including politicians, profited from contracts to supply the personal protective equipment including medical masks and gowns.

Some of the companies that were awarded multi-million dollar contracts had only been set up a few months earlier, it is claimed.

Other firms that won tenders were linked to relatives of high-ranking government officials raising questions over possible conflicts of interest.

Appearing in parliament Kenya’s health minister Mutahi Kagwe, described the findings as fictitious and said his ministry could account for more than $200m (£152m) worth of donations it had received.

But the investigation alleged double that amount could not be accounted for. The government denies the allegations

In one case, the news report said that donations allegedly received from the Jack Ma foundation went missing after being received by the government but were then re sold to the state at inflated prices.

Go deeper: This is not the first case of looting Covid-19 funds in Africa. Same has been heard in South Africa where a body has been setup to probe coronavirus corruption in the country. It seems like this has been norm since the pandemic spread across the world hitting Africa.

Despite widespread misinformation about the immunity of Africans to COVID-19, overall poor health is driving mortality globally. Reports from other continents are showing higher morbidity and mortality in people of African heritage. While the observed disproportionality in adverse outcomes may be due to the impact of health disparities, poorer access to health care, and lower socioeconomic factors, the implication for African countries is clear.

This created the need for aid but it seems that most African countries will rather do other things with the money donated than improve the situation. It is almost as if some African countries are oblivious to how dangerous the virus can be.

Kenyan journalist has a 50-50 chance of surviving in detention.

Kenyan journalist Yassin Juma, who is being detained in Ethiopia, has said he might not pull through as his health continues to deteriorate after contracting coronavirus.

Mr Juma detailed his 47 days in detention in a letter.

“I am currently being held at block (W) with 68 other Covid-19 positive inmates with no access to medication in overcrowded cells, no running water and no diet to assist us with our condition. My health is failing with each passing day, and I am not sure if I will make it. It is 50-50 with coronavirus but the conditions in detention makes my survival chances less,” he writes.

Mr Juma was arrested at the home of Ethiopian activist and media owner Jawar Mohammed after the killing of singer Hachalu Hundessa that sparked protests.

He was charged with incitement and involvement in violence and was released on bail but rearrested in unclear circumstances.

Hundessa who was perceived as an activist for the Oromo ethnic group was shot dead while driving in Adis Ababa on Monday leading to the unrest that has so far claimed close to 80 lives.

Reports indicate that Yassin Juma was arrested because of his close relationship with the controversial musician, one of few people who have openly criticised Ethiopian Prime Minister Abiy Ahmed’s government.

He is also reported to have close ties with yet another Oromo activist Jawar Mohammed, in who’s media house Juma was working in Addis prior to his arrest Friday.

Juma is set to appear in court and Kenyans hope that he is released soon!