Y! For Africa Focused on Emerging Leaders and Culture Shapers
Home 54° Across Africa #GhanaDecides: Ghanaians are casting their votes and there’s no violence | #54DegreesAcrossAfrica 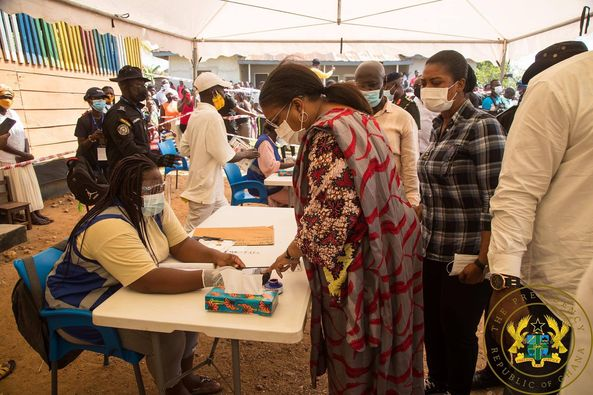 Ghanaians cast their votes on Monday in a presidential election viewed as a close fight between President Nana Akufo-Addo and his longtime rivals John Mahama who signed a peace pact on Friday in the spirit of ensuring Ghana’s traditionally violence-free power transfers — already experienced on seven occasions since the country returned to democracy nearly 30 years ago.

Go deeper: Akufo-Addo of the New Patriotic Party (NPP) and Mahama of the National Democratic Congress party (NDC) have already gone head to head in prior elections and the two major parties have always accepted electoral outcomes – pursuing any grievances through the courts.

Around 17 million Ghanaians are registered to vote for a new president and members of parliament for 275 seats.

They are among 12 candidates who are running — including three women and key issues include unemployment, infrastructure, education and health.

First ever regional election in Cameroon ends with violence

Regional elections are taking place in Cameroon with residents voting for the first time for members of the country’s upper House of legislature.

Local representatives Sunday, voted to appoint councils in all 10 regions made up of delegates and traditional rulers.

Separatist fighters had vowed to disrupt the vote and arrest anyone who took part in the Northwest and Southwest, the only regions where English is spoken instead of the official French language.

They killed one regional official who voted outside the town of Bamenda in the Northwest, said one separatist leader, Cho Ayaba.

President Yoweri Museveni Sunday, said he will continue pushing for elections in the neighboring South Sudan on grounds that it will help solve their political problems “once and for all.”

Go deeper: The US Ambassador to Uganda, Natalie E. Brown, was accompanied by the US Special Envoy for South Sudan, Stuart Symington IV to the meeting while the UK High Commissioner to Uganda, Kate Airey was accompanied by the United Kingdom Special Envoy to Sudan and South Sudan, Robert Fairweather, according to a statement from Museveni’s media team.

“The real medicine to the South Sudan problem is elections. This same problem was in Kenya but was managed when they formed alliances and later held elections. Me I want to push them (South Sudan) to elections. If South Sudan can do the Kenyan way, elections will force them to make alliances and this problem will be history,” Museveni told the United States (US) and United Kingdom (UK) Special Envoys to Uganda who met him at Jinja State Lodge on Sunday.

Last week, The Lancet medical journal released its 2020 Countdown on Health and Climate Change Report – the fifth annual report of its kind highlights the worsening global climate crisis and how this impacts human health.

Go deeper: The report’s findings on South Africa are concerning particularly with the country’s increased exposure to wildfires, lower crop yields for staple foods like maize and soy, as well as ongoing drought conditions and air pollution in heavily populated areas.

Amid the COVID-19 pandemic, the report calls for immediate increased attention to strengthen global healthcare systems as climate-related health issues could be the next global crisis.

French President, Emmanuel Macron Monday, said that concerns over human rights violations in Egypt would not affect the future sale of French arms to that country, as Cairo should retain its ability to fight terrorism in the region.

Go deeper: “I will not condition matters of defense and economic cooperation on these disagreements [over human rights],” Macron said at a joint press conference with Egyptian President Abdel-Fattah el-Sissi.

Since 2015, France has sold considerable amounts of weaponry to Egypt, including two French-made Mistral-class helicopter carriers and two dozen French Rafale advanced fighter jets. Macron has previously voiced concern that Egypt might turn to the West’s rivals, China and Russia, if it did not receive adequate support from Europe.

The comments by Macron are likely to cause a disagreement with human rights groups, 20 of which issued a joint statement ahead of Monday’s meeting condemning France’s strategic partnership with Egypt.

Egypt was “abusively using counter-terrorist legislation to eradicate the legitimate work in favor of human rights and suppress all peaceful dissent in the country,” the statement said.