Y! For Africa Focused on Emerging Leaders and Culture Shapers
Home 54° Across Africa Libya’s war has no end in sight, 10,000 Nigerians die due to insurgency | #54DegreesAcrossAfrica 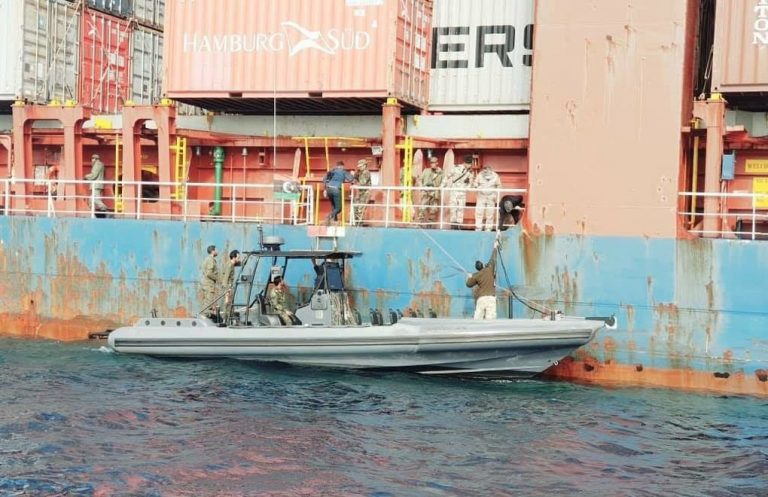 A ship from Turkey under a Jamaican flag heading to the port of Misrata in western Libya was reportedly intercepted by Khalifa Haftar‘s forces. Turkey’s state-run Anadolu Agency (AA) has reported that the ship was carrying medication.

As reported by Reuters, Libyan National Army (LNA) Spokesperson, Ahmed al-Mismari has said that the commercial cargo ship, Mabrouka, had 17 crew, including nine citizens of Turkey, and containers that have not yet been inspected. LNA naval forces stopped it near the eastern port of Derna, according to al-Mismari.

al-Mismari said that the commercial cargo ship Mebruka, whose owner is stated to be a citizen of Turkey, was caught by Haftar’s militia. The militia has claimed that the ship entered a prohibited area and did not respond to calls and withdrew to the port of Ras al-Hilal. Al-Mismari has added that the ship was “investigated and inspected because it violated maritime rules and laws.”

Go deeper: Since the ousting of Muammar Gaddafi in 2011, two seats of power have emerged in Libya: One in eastern Libya, the LNA led by Khalifa Haftar, and the other in Tripoli, which enjoys UN and international recognition, the Government of National Accord (GNA). The government and western parts of the country have been under attack by Haftar’s forces since April 2019, with over 1,000 killed.

On November 27, 2019, Ankara and Tripoli reached two separate memorandums of understanding (MoU), one on military cooperation and the other on maritime boundaries of countries in the Eastern Mediterranean.

Human rights organisation, Amnesty International, has said that over 10,000 people arrested in the context of the Boko Haram crisis have died in military custody since 2011, many of them in Giwa Barracks, Borno.

AI lamented that up to 25 percent of the casualties are older men and women who are most affected and vulnerable during Boko Haram and military raids on villages and communities.

Amnesty disclosed these in its latest report on Tuesday – a 67-page report, titled, “My heart is in pain”: Older people’s experience of conflict, displacement, and detention in North-East Nigeria.

Go deeper: It is now more than two decades since Boko Haram started terrorising North East Nigeria – with the Nigerian military responsible for war crimes and likely crimes against humanity. The number of people that have died are immeasurable and older people are usually the most vulnerable. Human rights have been largely ignored and there is no political will in sight to end insurgency in the area.

Weah has told supporters keeping the same leader for years “is not the way to go” and wants presidents and lower-house politicians to serve five years instead of six; and senators seven years instead of nine.

Go deeper: Opposition politicians in Liberia fear the football star turned politician, 54, could try a similar move as President Alpha Conde who won a controversial third term in October after pushing through a new constitution that allowed him to bypass a two-term limit. Although Weah’s office has denied the claim.

Alongside the vote on reducing terms, Liberians are also choosing whether to repeal a 1973 ban on dual nationality, a move which some hope could be an economic boon in the poor nation of 4.8 million people.

Senator’s life on the line after night with mystery woman

When Machakos Senator Bonface Kabaka drove himself to a private house in Nairobi’s Kilimani area on Thursday afternoon, he was expecting a fun-filled evening with a woman he had invited over.

Kabaka checked into a room at 3Dee Apartment located along Elgeyo Marakwet road in the posh Kilimani area. An hour later, he was joined by a woman identified as Esther Nthenya Muli.

A quiet night between the two adults ended unexpectedly with the Senator now fighting for his life in Intensive Care and Muli in police custody.

According to a police report, the couple were having a good time until past midnight when Kabaka complained of a sharp headache and asked for painkillers. His condition didn’t improve forcing Muli to ask the hospital management for an ambulance to rush him to the hospital.

The tourism industry will continue to get a helping hand from the Central Bank of Egypt (CBE) after the bank granted tourism companies debt repayment holidays and more room to take out operating loans, according to two separate CBE circulars.

A grace period for all loans taken out since the pandemic took hold in March now expires at the end of December 2021, after having originally been six months following the date of taking out a loan.

Go deeper: The CBE in March modified its 50 billion Egyptian pounds program to support the tourism sector in response to the pandemic, providing low-interest loans to companies struggling to survive as international travel ground to a halt. The program offers two-year loans to companies which pay a reduced 5% interest rate to pay wages for up to six months and cover maintenance costs and daily operations.