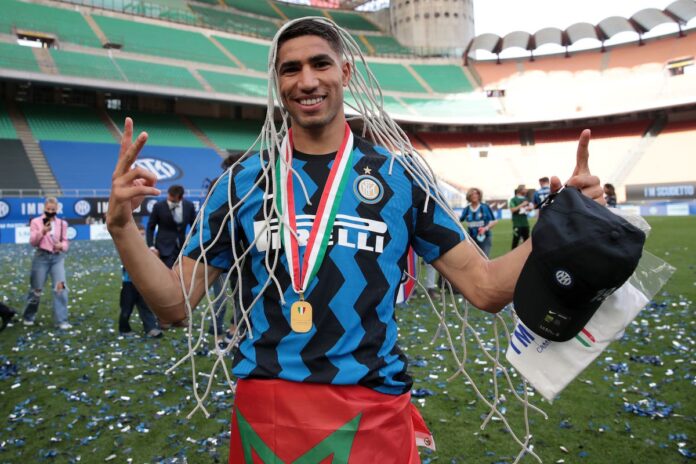 Real Madrid, Paris Saint Germain, Chelsea have all been in hot pursuit of Achraf Hakimi, one of the power players who was instrumental in Inter Milan’s victory at the league, scoring 7 goals and providing 10 assists in 37 appearances.

According to a report by Spanish outlet El Gol Digital, Real Madrid are reportedly debating the possibility of re-signing Achraf Hakimi in a €60 million deal in the summer transfer window.

The Morocco international is also being hotly pursued by Paris Saint-Germain, although their most recent offer of around £52 million is some way short of Inter Milan’s valuation of £70 million.

Inter are looking to cash in on at least one of their high-profile players, which was part of the reason behind Antonio Conte‘s decision to quit as manager last week, just three weeks after leading the club to a first Serie A title in 11 years.

Sky Sports News reported Monday that Chelsea have interest in another of Inter’s stars, their former striker Romelu Lukaku.

According to the Athletic, Chelsea manager, Thomas Tuchel has reportedly been discussing the idea of targeting the 22-year-old Hakimi in this summer’s transfer window.

The full back, renowned for his blistering pace, already has so much experience at the top level.

Born in Madrid to Moroccan parents, Hakimi joined Real Madrid’s youth setup in 2006 from CD Colonia Ofigevi, aged eight. After progressing through La Fábrica, Hakimi was promoted to the reserves in June 2016. Shortly after, he was included in the first-team’s pre-season camp in the United States. Hakimi made his debut for Los Blancos in the first match of the 2016 International Champions Cup, a 3–1 loss against Paris Saint-Germain.

In the 2017–18 UEFA Champions League, he made two appearances as Real Madrid won the title. Although not in the squad for the final of the competition, he received a medal and is credited as the first Moroccan player to win the Champions League.

On July 11, 2018, Borussia Dortmund signed Hakimi on a two-year loan deal. On July 2, 2020, Inter Milan announced the signing of Hakimi on a five-year contract, with a reported fee of around €40 million.

Hakimi is married to Spanish actress Hiba Abouk.The couple have a son, born in 2020.

Achraf Hakimi is on the list of the Most Inspiring Youth on the Continent – Africa 500.