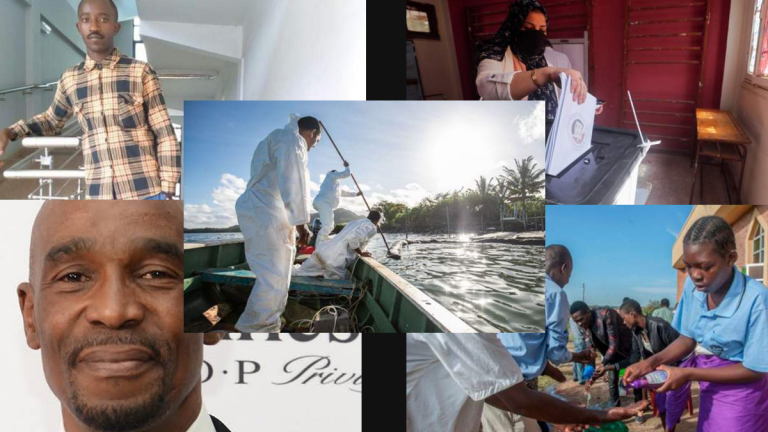 As salvage teams rush to pump oil out of a Japanese-owned ship grounded off the coast of Mauritius, politicians on shore are starting to spread the blame.

The government has called the situation an “environmental crisis”, and following a request from Prime Minister Pravind Kumar Jugnauth, France and Japan have assisted.

But opposition politicians are demanding to know how Jugnauth’s government could have allowed the spill in the first place.

However, an inspection body in Japan said the vessel passed its annual check in March without any problems.

Other details: Fuel spilling from a Japanese bulk carrier that ran aground on a reef in Mauritius two weeks ago is creating an ecological disaster, endangering corals, fish and other marine life around the Indian Ocean island, officials and environmentalists say.

On Thursday, the government said fuel was leaking from a crack in the vessel’s hull and Prime Minister Pravind Kumar Jugnauth declared a state of environmental emergency, pleading for international help.

A Rwandan man died in hospital after being badly assaulted by a police officer who was enforcing a night-time curfew on the outskirts of the capital, Kigali, a member of his family said.

Flavien Ngaboyamahina, who would have turned 30 Wednesday, had visited a friend in Karenge, east of Kigali.

They were both arrested on August 1 for being outdoors after 21:00 local time when the curfew starts, the family member, who spoke on condition of anonymity, said.

“They were both on the road near his friend’s home when the incident happened but he, Flavien died in hospital three days later.

Go deeper:  The World Health Organization (WHO) Director General, Tedros Ghebreyesus, recently commended the efforts of the Rwandan government, saying they “are doing well in managing the coronavirus pandemic”.

However, opposition groups in Rwanda have condemned what they say is the violation of human rights and the use of excessive force by security officers while enforcing Covid-19 restrictions.

In the last two weeks of July, nearly 60,000 people were punished for either not wearing face masks, breaching the curfew or not observing social distancing, the interior ministry said.

Most of the offenders were arrested and taken to stadiums or school buildings where they were forced to sit all night or day.

Fans are paying tribute to veteran radio personality Bob Mabena who died on Monday following a cardiac arrest, according to local media.

Mabena’s employer, Power FM, asked the public to allow his family to mourn.

“It is with deep grief and pain that we announce Power 98.7 Breakfast Host, Bob Mabena passed away this afternoon, from cardiac arrest,” the radio station tweeted.

“The family is coming to terms with his passing and respectfully requests the public to afford them the appropriate space.”

Go deeper: Mabena is known for having hosted some of South Africa’s biggest radio shows in his career, spanning over 30 years. Mabena also hosted a popular music show on tv in the 90s called Studio Mix. In his younger days, the radio guru also had a brief stint recording music in the 90s with the likes Thebe Senganga and legendary footballer, Doctor Khumalo.

New Covid-19 measures announced in Malawi over the weekend have met with a backlash, with civil societies threatening to take the government to court.

In the new restrictions, public gatherings of more than 10 people have been banned, except for funerals which can have up to 50 people in attendance.

Wearing of face masks is mandatory in all public spaces and offenders could be fined up to $13 (£10). Places of worship have been closed. Bars can operate for six hours a day, between 14:00 to 20:00 local time, but only sell takeaways.

The new measures were prompted by a recent increase in coronavirus cases in the country, the ministry of health said.

Similar measures announced by the previous administration of President Peter Mutharika – which also included a 21-day lockdown – were blocked by a court pending determination. No verdict has been made on the matter.

Go deeper: Described as “The Warm Heart of Africa” because of its friendliness, Malawi has shown that strong institutions rather than the rule of strong men are the panacea to the sustenance of democracy, the rule of law and good governance.

It also speaks to the fact that Malawi jealously guards the concept of separation of powers, without which the judiciary and legislature cannot thrive, especially where there’s an overbearing executive arm of government. That’s the pathway to real democracy, shorn of the rampant abuse that’s the bane of most African countries.

Yet, Malawi is usually in the news for the wrong reasons. It is among the world’s least-developed countries. Most of the stories have centered on drought and poor agricultural yields due to poor rainfall. Because of this, Malawi has gained a reputation for carrying its begging bowls to the international community and donor agencies for a rescue package of food and aids.

Indeed, Malawi is dependent on donor aid for most of its annual national budget. Besides, the effects of excess mortality due to AIDs have resulted in lower life expectancy, higher infant mortality, and death rates.

Egyptians head to the polls to elect revived senate

Egyptians have started voting for the senate that was revived after last year’s constitutional referendum.

Tuesday’s poll will see 200 members elected by public vote to the upper chamber of parliament, which has an advisory role and few formal powers. The remaining 100 senators are appointed by the president.

The country’s lower chamber, the house of representatives, has a legislative role.

The election comes at the height of the coronavirus pandemic – Egypt has the second-highest number of cases on the continent after South Africa.

Authorities have said voters will be given face masks and polling stations are to be disinfected to prevent the spread of the virus.

Go deeper: Egyptians are heading to the polls to choose members of a newly formed Senate. Voting begins on Tuesday, with results due on August 19. Of the 300 seats in the new Senate, 100 will be appointed by the president, Abdel Fattah el-Sisi, directly. Critics say it is a power grab, but the government says it will give minorities a voice.

Pope baptises twin after surgery to separate them

Italian news agencies report that previously conjoined twins have been baptised by Pope Francis in the Vatican City.

Ervina and Prefina, whose skulls were fused together, underwent surgery there last month.

Their mother Ermine Nzotto is from the Central African Republic (CAR). Soon after the operation, she told local media she was keen for the Pope to baptise her daughters because “he has always taken care of the children of Bangui”.