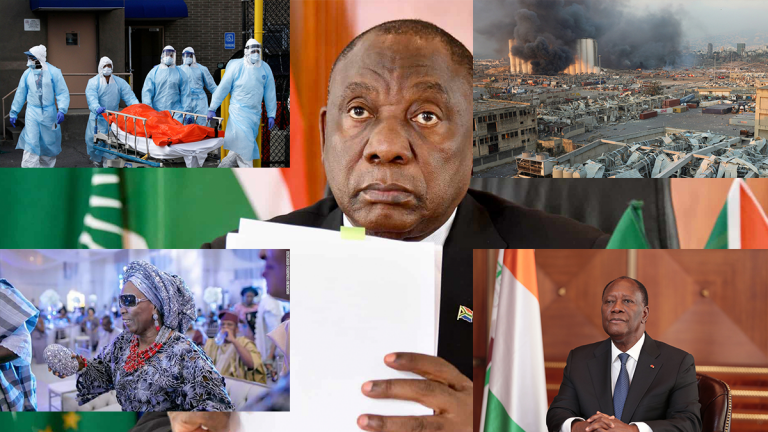 Mozambican port authorities have denied any knowledge of the ship that was carrying the explosives that caused the Beirut explosion.

The ship that was destined for Beira, in central Mozambique, 2013, is said to have been offloaded at Beirut and the ammonium nitrate cargo stored in a warehouse.

The final destination of the cargo was not Mozambique but Zimbabwe or Zambia, because ammonium nitrate is used to manufacture explosive materials used in the mining industry.

Go deeper: Following the explosion that has displaced over 300,000 people and a collective loss of $10-15 billion, investigations have been ongoing to get the root cause of the blast.

Lebanon’s President, Michel Aoun, blamed the detonation on 2,750 tonnes of ammonium nitrate that he said had been stored unsafely at a warehouse in the port.

Ammonium nitrate has been associated with deadly industrial accidents and becomes deadly when it begins to decay; having stayed a while in a place. A ship carrying 2,000 tonnes of the chemical once exploded in Texas in 1947, killing 581 people.

Ivory Coast’s President, Alassane Ouattara, has said he will run for a third term in October’s general elections.

The president was last week nominated by his party and said he would announce his decision later.

He had previously said in March that he won’t run for office again, but his preferred candidate, Amadou Gon Coulibaly, died in July; leading him to reconsider his position on re-election.

“I have decided to respond favourably to the call of my fellow citizens,” Ouattara said in a televised speech Thursday. “Given my previous promise, this decision represents a real sacrifice for me.”

His political opponents say he has no constitutional right to run for office again, but Ouattara counters the argument saying his first two terms do not count under the new constitution adopted in 2016.

The first round of polling will be held October 31.

The number of coronavirus cases in Africa has surpassed one-million, according to statistics from Africa Disease Control and Prevention (Africa CDC). The continent, however, appears so far to have been spared the worst of the pandemic.

Half of the infections are in just one country, South Africa.

There are still low levels of testing in most countries, meaning the rate of infections could be higher than reported.

Go deeper: For a continent whose readiness for the pandemic was close to zero, the swiftness to respond to cases as it rose is highly commendable.

We have had countries ban alcohol, international trade, border trade, impose lockdowns and state of emergencies as primary measures to curtail the spread of the coronavirus.

It could have been worse but African countries can pat themselves on the back for doing all that is within their power to prevent the spread of the coronavirus.

South Africa’s President, Cyril Ramaphosa, has appointed two special envoys to neighbouring Zimbabwe where a crisis is spiralling over government corruption and economic mismanagement. Zimbabweans are clamouring for accountability of the incumbent government on its use of funds and donations given by external bodies to curb coronavirus spread.

The pair of Sydney Mufamadi and Baleka Mbete will leave for Zimbabwe soon.

Go deeper: Through this week, #ZimbabweanLivesMatter has been trending and has gotten the attention of the world. In actual fact, the whole of Africa could have a hashtag calling for lives to matter better than they are now. Police brutality, violent clampdown on peaceful anti-government demonstrations, internet and social media shutdowns, disappearing journalists are only a few of the anti-people actions of governments across Africa.

However, Zimbabwe is facing intense crisis and response from sister countries will go a long way to push the government to do better. South Africa is leading the way.

Mojisola Odegbami did not anticipate that a trip to the United States would land her a part in a talked-about visual album by Beyoncé, ‘Black is King’.

Mojisola, 69, a grandmother, appeared in two music videos in the “Black Is King” album, which premiered on Disney+ on Friday.

Odegbami appeared in “Bigger” taking on the role of an African queen, and in “Mood 4 Eva” where she was dressed in African attire, including a gele, a traditional head gear commonly worn in West and Southern Africa.

More details: African culture is beautiful to experience, and it is not news that Beyonce featured a number of African creatives in her visual album.

Even though Beyoncé’s staff knew Odegbami, she did not get invited to cast in the album until her daughter’s friend took a leap and signed her up with the talent agency responsible for choosing characters for the album.

“I was out shopping one day and she called me, and asked that I come home immediately. I was scared, you know. She said ‘Grandma, it’s very important I need you to please come back home,’” she said.