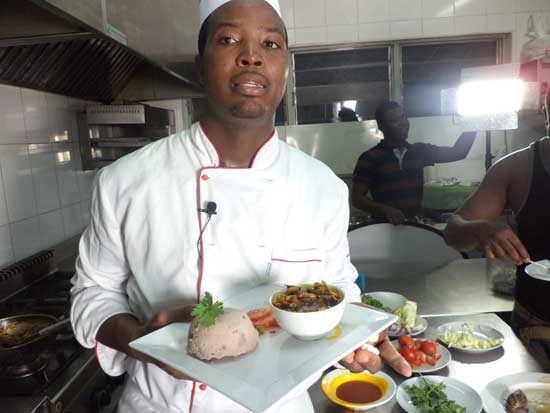 Elijah Amoo Addo is a Ghanaian chef and food stylist who has become a social entrepreneur, founding Food for All Africa.

Established in 2014 and based in Accra, Ghana, Food for All Africa is a nonprofit social enterprise that operates West Africa’s first community food support centre. The organisation uses advocacy and a food-sharing mobile phone app to feed thousands of vulnerable children through food recovery and redistribution.

Working with local restaurants, supermarkets, food distribution companies, and rural small-hold farmers, Addo’s organisation collects leftover food or unwanted food that is close to its use-by date and redistributes it to disadvantaged children in orphanages, hospitals and lower-income schools.

The organisation is also working on the national policy level to make it easier for suppliers to donate food and claim tax benefits. Additionally, after discovering that as much as 46% of the food produced on farms in Ghana goes to waste because of poor roads, broken-down trucks and inefficient marketing, Food for All Africa is collaborating with a range of stakeholders in the Ghanaian food industry to find ways to reduce food wastage.

What more do we know about Elijah?

Through the Chefs For Change Ghana foundation, he and his team are working with public and private stakeholders to inculcate, in African children, the spirit of cooking.

Every World Chefs Day, Elijah spends time with students teaching them the importance of African gastronomie to the economic emancipation of Africa.

He once said, “Food plays  a major role in the economic emancipation of the African continent.Until Africa is  able to sell its food as part of its tourism potential to the world, little can be achieved in overcoming poverty on the continent. African Food is our Life and we must sell it to the world.”

Elijah is the future!