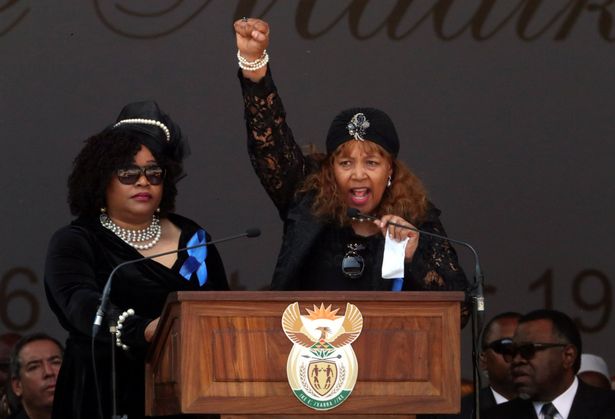 Ambassador Zindziswa Mandela also known as Zindzi Mandela-Hlongwane, was a South African politician who was serving as her country’s ambassador to Denmark at the time of her death. She is the daughter of anti-apartheid icons Nelson Mandela and Winnie Madikizela-Mandela.

Zindzi was born in 1960 in Soweto, the year that the African National Congress (ANC) launched an armed wing. Her parents were wanted by the government, and her early life was marred with the constant imprisonment of her father and occassional removal of her mother for months-long prison sentences.

In 1977, her mother was banished to the Free State and Zindzi lived with her. Zindzi was not able to complete her education until she was sent to Swaziland. She later studied law at the University of Cape Town, where she earned a B.A. in 1985. Eventually her mother was allowed to move back to Soweto.

The Mandelas’ daughter came to international prominence in 1985, when the white minority government offered to release Nelson Mandela from prison if he denounced violence perpetrated by his movement, the ANC, against apartheid, the brutal system of racial discrimination enforced in South Africa at that time. Her father’s reply could not be delivered by her parents and Zindzi was chosen to read his refusal at a public meeting on 10 February 1985 – the then 25-year-old Mandela “made history” when this happened.

The letter read: “What freedom am I being offered while the organisation of the people [ANC] remains banned? Only free men can negotiate. A prisoner cannot enter into contracts.”

In June 2019, while ambassador to Denmark, Zindzi’s Twitter account sent a series of Tweets, where she discussed “trembling white cowards who are the thieving rapist descendants of Van Riebeck [sic]”, and “uninvited visitors who don’t want to leave” that sent thrills across the world and caused significant controversy. She has been labelled a racist for this. Her views were described as hate speech by ANC veteran Mavuso Msimang, while her opinions drew support from the EFF and the Premier of KwaZulu-Natal Sihle Zikalala. Her Tweets came close to the end of her four-year term as ambassador to Denmark.

She had her own political afflictions, and consistently spoke about how her voice should not be silenced. Zindzi spent many years involved in South Africa’s freedom struggle, and embraced roles in the arts, philanthropy and business.The belief in her struggles will continue; as she was projected to have a role to play in the ANC and the transformation of the South African society.

Zindzi Mandela is survived by her husband and four children.