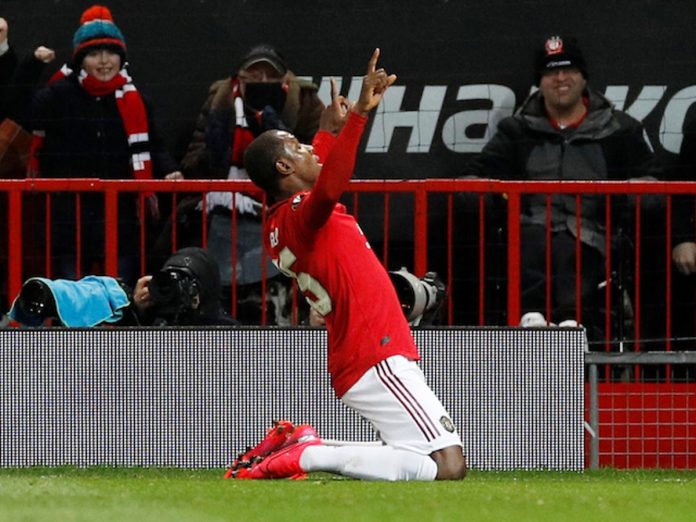 The 30-year-old Nigeria striker joined the English side on loan from Shanghai Shenhua – taking a pay cut to do so – because of an injury to Marcus Rashford.

After three brief substitute appearances for United, he made his first start last night with Anthony Martial ruled out of the game.

Ighalo, a boyhood United fan, became the first Nigerian to score for the club as they beat Club Bruges 5-0 in the Europa League last 32. Fans couldn’t help but chant his name at Old Trafford.

“It’s a great moment. I’ve been waiting for this,” Ighalo told BT Sport.

“There was a little bit of pressure but I’ve got the goal to start my Manchester United goal career, with the team I’ve supported since I was young. I dreamed of this.”

Since the first announcement of his transfer to the club, Odion has become the darling of social media and yesterday was no different. Below are a few tweets that showed the frenzy that followed after his debut goal.

He dedicated his goal to his late sister, who passed away in December 2019. Odion turned up his jersey, to show a t-shirt with his sister’s face. His sister, Mary Atole, 42, died suddenly in Canada on December 12, seven weeks before her brother made his dream move.

“I lost my sister in December, and she is very dear to me, she is a good United fan too,” Odion said in an interview.

“We hoped for this moment, but now I am in United, she is not here to see what is going on so it is a bit emotional for me. I promise myself that every goal I score I will dedicate to her. She is up there watching me and doing well for United.”

Club legend and former England midfielder, Paul Scholes, said: “He did well and looked sharp. He’s come into this team at the right time, just as a really creative player has come in Bruno Fernandes. If United need to rely on him I think he’ll do a good job.“

Owen Hargreaves, former England midfielder, agreed: “I like the fact he gives United a reference point.

“He is strong with his back to goal and is different to Martial and Rashford like that and I think we’ll see more goals from him for Manchester United between now and the end of the season.”

Pierre-Emerick Aubameyang missed his chance to keep Arsenal in competition

In the last minutes that could have turned the fate of the Gunners around, Aubameyang missed a golden chance to help the team advance into the Europa League last 16.

The striker scored a sensational goal in the 113th minute of the second-leg match with Olympiakos to put them 2-1 up on aggregate and seemingly on their way into the last 16. However, the Greek side hit back with a goal from Youssef El Arabi, to give the visitors a 2-1 lead on the night that made it 2-2 on aggregate and put them on course to advance via away goals.

In what could have been a spectacular moment for the Gunners with seconds left, the ball ricocheted towards Aubameyang, six yards from goal and, with just the goalkeeper to beat, the striker missed. Though the Gabon international has gained a reputation for being a threat on goal, he somehow missed his chance when he was needed the most.

“I don’t even know,” he said when asked how he missed it.

Here is what some fans on Twitter had to say:

Arsenal is out of the Europa League and would continue their race to stay in the top four of the Premier League.