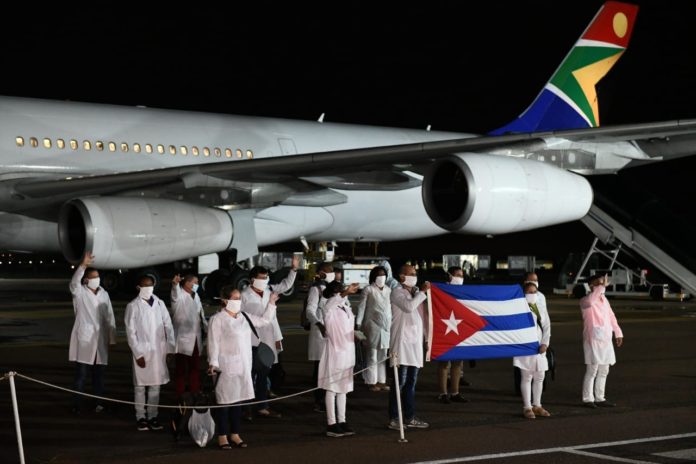 The minister said the 187 specialists – including biostatisticians, epidemiologists, family physicians and health technologists – will be accommodated until 2021.

Go deeper: The arrival of Cuban doctors in South Africa to help fight coronavirus caused an uproar as an association said unemployed local medics should have been given priority to work.

The Law Society of Kenya (LSK) say they will petition both houses of parliament to start a petition to impeach President Uhuru Kenyatta for, in their eyes, annulling the constitution.

Go deeper: The lawyers said it will also remove the Solicitor General and Attorney General from its list of advocates for misadvising the president.

This follows the president’s refusal to swear in 41 judges proposed to him by a commission – with the chief justice blaming him for causing a near paralysis of court operations.

Turkish President, Recep Tayyip Erdoğan has said he reached some agreements with his US President, Donald Trump in telephone talks about the situation in Libya.

On Sunday, the Russian foreign minister said he had agreed with Turkey to work for peace in Libya.

Russia has been providing military support to Gen Haftar.

The lawyer for a journalist, Kingsley Njoka Fomonyuy, who disappeared after being arrested in Cameroon almost a month ago says he saw his client for the first time on Monday.

Go deeper: Kingsley was arrested on May 15 by suspected security operatives and no one knew his whereabouts.

More than three weeks later, the journalist’s lawyer, Joseph Akuwiyadze, visited him at the Secretariat of State for Defence in the capital Yaoundé.

Akuwiyadze says his client is being accused of supporting and abetting terrorism, a charge that could carry the death penalty.

The speaker at Ethiopia’s parliament, Keria Ibrahim, says she is resigning after accusing Prime Minister Abiy Ahmed’s administration of unconstitutional attempts to stay in power.

Go deeper: Keria, who is the speaker of Ethiopia’s upper house of parliament, called the House of Federations, says she doesn’t want to be part of a process in which “the constitution is being violated and an authoritarian government is being formed”.

Ethiopia has postponed parliamentary elections, due in August, over the coronavirus pandemic.