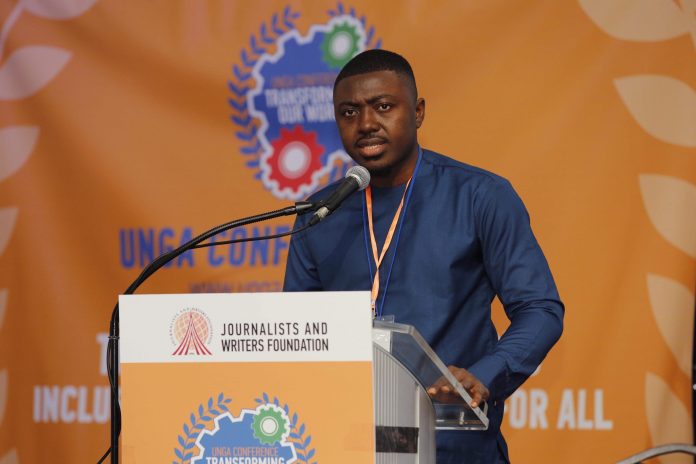 Emmanuel  N.B. Flomo is the founder and Executive Director of The Inspire Liberia Project, an institution in Liberia working to promote youth empowerment through community civic engagement, community empowerment, and to increase indigenous participation in decision-making in Liberia.

Flomo, began his Public Service career as the National Leader of the Cuttington University Student Union (CUSU), where he studied Accounting and also holds an MBA in Public Finance. Due to his outstanding leadership and accomplishments at the Cuttington University, while serving as a student leader he was selected by the President of Liberia in 2010 and assigned to the Ministry of Finance and Development Planning as a Budget Analyst for Strategic Development and Forecasting, where he helped in the preparation of the National Budget of the Republic of Liberia.

He has contributed to youth development work in Liberia and Africa for over 15 years.

What else do we know about Emmauel Flomo?

At the UNGA Conference of 2019, hosted by the Journalists and Writers Foundation; Emmanuel Flomo had this to say on the issue of Advancing Youth through Social and Economic Empowerment…

“Young people should be empowered and motivated to consider political leadership as a means to serve their nation and should be oriented on anti-corruption drives with a focus on prevention, education, and strategies for fighting corruption and restoring economic development.

Well-developed skills can be equated to long-lasting empowerment and sustainable growth. When we take critical development steps, a huge reduction in the rural and urban gap becomes visible and appreciable by the society and its people.

Young people represent courage, wisdom, and energy, the will-power to do good, they are able to take leadership that would make the difference. Their energy and understanding must be respected, guided and built for future roles.”

Emmanuel N.B. Flomo is the future.