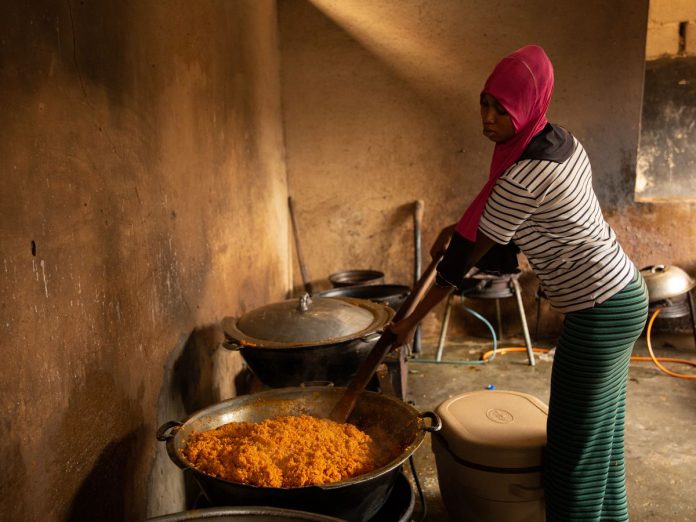 Jollof is indeed a popular dish in West Africa. Bets are, it is probably your favourite dish. And if you are Nigerian, you probably won’t regard a party or ceremony as complete without the presence of that revered dish. Outside the continent, Jollof is probably the most commonly known African dish. Inside the continent, it is the most debated; in terms of origin and best recipe. Let’s take a quick dive into its origin.

The name Jollof derives from the Wolof people. The Wolofs are a West African ethnic group found in northwestern Senegal, The Gambia, and southwestern coastal Mauritania. They are the largest ethnic group in Senegal, where Wolof is the most widely spoken language — as a lingua franca for Wolof natives and a second language for non-natives. In The Gambia, about 16% of the population are Wolof. They are in the minority, yet their language and culture have a great influence because of their dominance in Banjul, the capital of Gambia, where a majority of the population is Wolof. In Mauritania, Wolofs are about 8% of the population.

Jollof can be traced to the early Senegambia region that was ruled by the Jolof Empire between c. 1350 and c. 1549. Historians have confirmed the plausibility of this origin given that rice is a popular food crop in the upper Niger valley. Others have proposed that the dish spread to other West African countries through the Mali Empire (c. 1235 – 1670) especially the Djula tradespeople, who were migrants that established trading communities across the West African region in the 14th century. Rice was one of the crops the Djula people traded across the region.

The many shades of Jollof

Main ingredients include rice, cooking oil, vegetables such as tomato, onion, red pepper, garlic, ginger and scotch bonnet. Tomato paste (puree) is added to enhance the colour. Other ingredients such as seasoning spices, salt, curry powder, dried thyme, are also used. Chicken, turkey, beef, and fish, are served as complements to the dish.

The recipe of Jollof varies across the region, thus stirring competition as to which tastes better. The more notable rivalry has been between Nigerians and Ghanaians, with its people claiming recipe superiority over the other. On social media, it will often trend as #JollofWars.

Long grain parboiled rice, tomatoes and tomato paste, pepper, vegetable oil, onions, and stock cubes, all cooked in one pot, with fried tomato and pepper puree forming the base. Rice is added and left to cook in the liquid. When ready, the dish is served with meat, fish, chicken or turkey, and other complements such as fried plantain, moi moi, steamed vegetables, coleslaw, salad, etc. In the riverine areas of Nigeria, seafood is the main source of protein and often takes the place of chicken or meat.

Other variations of jollof rice include; coconut jollof rice, fisherman jollof rice (made with prawns, periwinkles, crayfish), mixed vegetables jollof rice, jollof rice and beans, and “concoction rice,” the more economical version, the preparation of which can involve as little as rice and pepper only.

Vegetable oil, onion, bell pepper, cloves of pressed garlic, chillies, tomato paste, beef or goat meat or chicken, jasmine or basmati rice and black pepper. The method of cooking jollof begins with first preparing the beef or chicken by seasoning and frying it until it is well-cooked. The rest of the ingredients are then fried all together, starting from onions, tomatoes and spices in that order. After all the ingredients have been fried, rice is then added and cooked until the meal is prepared.

Shito, a popular type of pepper which originates from Ghana, is served alongside. In ceremonies, salad is served with the dish.

In Senegal, Jollof is likely to be prepared with the use of tamarind and additional palm oil, added to the base of the cooking pan, which gives the dish a crusty taste.

In Cameroon, it is reported that Jollof Rice tends to be made with beef, and enjoyed with carrots and green beans.

Also, in Liberia, hot peppers along with mixed vegetables and proteins, including beef, are used abundantly in their Jollof recipes.

More than its taste

Jollof, as it is a rice dish, is primarily carbohydrates. Protein can be obtained from the complements of Chicken. turkey, beef and/or fish. Omega-3 fatty acids are contained in fish as well as protein.

Whenever you find yourself in any other West African country other than where you grew up in, make it a #TravelGoal to taste their version of Jollof rice. You could be the one to end the wars. And if you are a foreigner visiting any country in West Africa for the first time, take a cue from the past visits of Mark Zuckerberg, CNN journalist, Richard Quest, and American rapper, Cardi B.