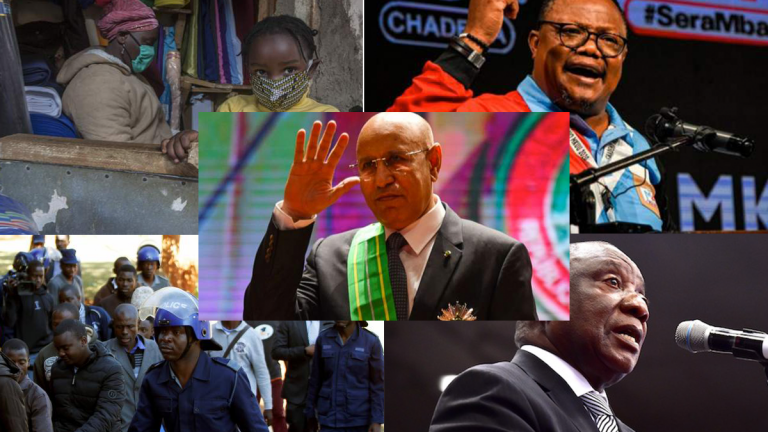 Mauritania’s president, Mohamed Ould Cheikh El Ghazouani, has appointed a new government after some of his ministers were named in a report on the financial dealings of former President Mohamed Ould Abdel Aziz.

President Cheikh El Ghazouani’s office has acknowledged that the changes were as a result of the report.

He had on Thursday replaced his prime minister for undisclosed reasons.

The former prime minister and three ministers were mentioned in the report that looked into the sale of state properties and handling of oil revenue, according to AFP news agency.

The new cabinet was announced on Sunday and the presidency secretary general Adama Bocar Soko said excluding the named ministers would give them “the time they need to prove their innocence”.

Local media reports that former President Aziz has been summoned in connection with the report.

An investigation is expected to begin before parliament votes on whether to proceed to trial.

Go deeper: Having spent one year in office, President Ghazouani made little progress in overhauling existing repressive laws in his first year, and in June, Parliament adopted an overly broad Law on Combatting Manipulation of Information that stipulates fines and harsh prison sentences for violations. Parliament has yet to pass a draft law on violence against women and girls introduced in 2016.

This move might be a step in the right direction. The acting Middle East and North Africa director at Human Rights Watch said “The president has an opportunity to break with his predecessor’s tendency to lock up opponents, and to embrace a rights-based approach and a good place to start is reforming laws that stipulate harsh sentences and even the death penalty for nonviolent speech offenses.”

South Africa’s President, Cyril Ramaphosa, has said the government will set aside 40% of public procurement for women-owned businesses.

The move will boost women financially and reduce gender inequality, he said.

Go deeper:  The concept of ‘Women Rights’ is yet where it ought to be. Backward cultural practices, and religious illustrations are still used to subjugate women in all aspects of the ‘men’s world’. But, while some countries show outright disregard for women, a few are doing their best to be inclusive.

With the growth in feminism and the improved knowledge of it, most African countries are sitting up and rising up to the challenge of actively supporting women.

Zimbabwe’s main opposition party, MDC Alliance, says about 30 of its members have fled their homes for fear of being abducted.

The party has tweeted that some members were contemplating “moving their children to safer places“.

Opposition supporters and activists called for anti-government protests towards the end of last month to decry economic mismanagement and corruption.

The government suppressed the protests by warning people to stay indoors and cracked down on solo protesters.

Those arrested have been charged with various offences that activists say have been fabricated to fall within the constitution.

Go deeper: #ZimbabweanLivesMatter, a trend that had been on the internet for weeks now seems to be getting quieter. Could it be that measures are being put in place to curb the violence and abductions? The harsh nature of the ruling party against Zimbabweans has stayed consistent.

The booker prize nominee, Tsitsi Dangarembga says that Zimbabwe will “implode” unless its citizens are allowed to speak out.

Tanzanian opposition leader, Tundu Lissu, says he lacks confidence in the electoral commission ahead of his presidential contest against incumbent, John Magufuli, in October’s general elections.

He told Kenya’s Radio Citizen on Monday that electoral officials in the country serve at the pleasure of the incumbent.

“The chairman and the chief executive of the electoral commission were appointed by President Magufuli. They have proved over the years that they are not independent,” Lissu said.

He said that his Chadema party will still participate in the elections, but will use all means to demand for accurate results to be released.

Lissu said no Tanzanian radio or television station had interviewed him since his return for fear of state repression.

Go deeper: Lissu returned to the country from Belgium last month after surviving an assassination attempt in the capital, Dodoma, three years ago. He was the former MP for opposition Chadema party, and has been nominated as the presidential candidate against incumbent John Magufuli in the October 28 elections.

Lissu believes that the current government is clueless on what to do to ensure that Tanzanians have a better life. He threw a jab at the current President Magufuli on how he has handled the pandemic, calling it a national embarrassment.

The authorities in Malawi have ordered bars and churches to close.

This comes after the number of coronavirus cases doubled over the past month. There have so far been 4,624 cases of the coronavirus in the country, according to the Johns Hopkins University.

These include a ban on gatherings of more than 10 people and the mandatory wearing of face masks.

Go deeper: With most countries imposing lockdowns and measures to curb the spread of coronavirus, Malawi seems to be on another continent of its own.

Whether this is a show of confidence or outright negligence, it makes sense to believe that the people of Malawi had other priorities. One of which is the countries presidential election in June where President Lazarus Chakwera emerged winner. It feels like the dust has settled and everyone can now pay attention. With this move, Malawi can learn from the countries who have gone ahead of them.