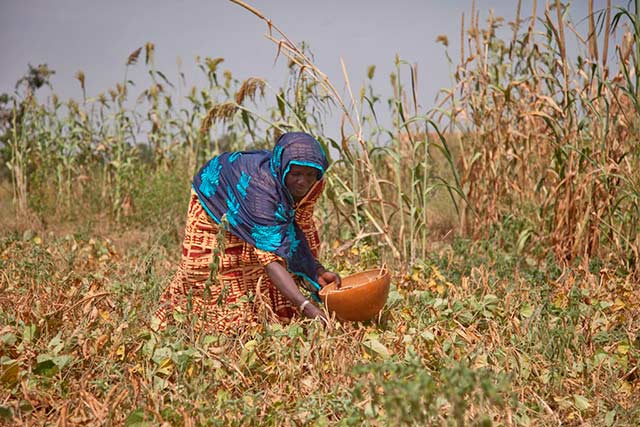 The landlocked once fertile West African nation of Burkina Faso has been hard hit by drought and desertification.

The area used to support generations of farmers, but families now can only scrape a living.

Go deeper: Food insecurity already affects two million people in Burkina Faso, according to the latest report from its government and aid groups.

The crisis in Burkina Faso already has displaced about 850,000 people, leaving many subsistence farmers unable to feed their families.

‘Burundi to swear in president Ndayishimiye on June 18’

Burundi will swear in President-Elect Evariste Ndayishimiye Thursday, June 18; the AFP news agency reports citing an official source. The development comes a week since the death of outgoing Pierre Nkurunziza.

The Ministry of Foreign Affairs in a statement invited Heads of Diplomatic Missions to the event which is slated for the Stade Ingoma in the capital, Gitega.

Backstory: Ndayishimiye was originally supposed to be invested in August after winning May 20 polls which the opposition unsuccessfully contested in court.

The death of Nkurunziza created a vacuum which experts expected the speaker of the national assembly to occupy by cabinet last week, sought judicial direction on the vacuum. The Constitutional Court ruled late last week that the president-elect be sworn in as soon as possible.

South Africa’s President Cyril Ramaphosa has said the coronavirus pandemic had worsened unemployment in the country.

In his Youth Day message, Ramaphosa urged young people in the country to partner with government in coming up with “solutions to the unemployment crisis“.

He said the government was now looking up “to the innovative and pioneering spirit” of its young people.

Why this matters: African leaders have not been known to involve the young demography in their governments, and when they do, it is just but a small percentage. The argument is that experience matters more, so, they fill their governments with recycled politicians.

With this initiative, Ramaphosa is changing that narrative and we hope other African leaders join this train.

Dozens of troops ‘dead or missing’ in northwest Mali attack

Dozens of troops have either been killed or gone missing after attackers ambushed their convoy in central Mali, according to reports citing military sources.

About a dozen vehicles came under attack on Sunday at Bouka Were, some 100km (60 miles) from the Mauritanian border, a senior military official was quoted as saying by AFP news agency, speaking on condition of anonymity.

Go deeper: In recent years, Mali has been facing a worsening security situation. What began as a localised revolt in the country’s north in 2012 soon spread to the centre of the country and then to neighbouring Niger and Burkina Faso.

The UN peacekeeping force, a French military intervention and military campaigns by national armies, have failed to stem the violence, which killed 4,000 people in the three countries last year and displaced hundreds of thousands.

The conflict has exacerbated ethnic tensions and local grievances over poverty and the absence of the state, giving rise to ethnic militias and bolstering support for armed groups, some of which are linked to al-Qaeda and the ISIL (ISIS) group.

The Kenyan authorities are investigating the disappearance of medical equipment donated to help stop the spread of Covid- 19.

Botswana has lifted the lockdown on its capital, Gaborone, after most of the latest reported cases of coronavirus turned negative.

Ugandan socialite Shanita Namuimbwa is threatening to sue the Ministry of Health and its partners; United Nations Children’s Fund (UNICEF) and the World Health Organisation (WHO) over a Covid-19 advert she appeared in.

U.S.-based Congolese fashion designer Anifa Mvuemba held a virtual show on May 22 for her latest collection called ‘Pink Label Congo’, and the 3D animated event was watched by tens of thousands of people who streamed it on her Hanifa Instagram Live page.