Y! For Africa Focused on Emerging Leaders and Culture Shapers
Home 54° Across Africa #CongoIsBleeding: Why is it being ignored? 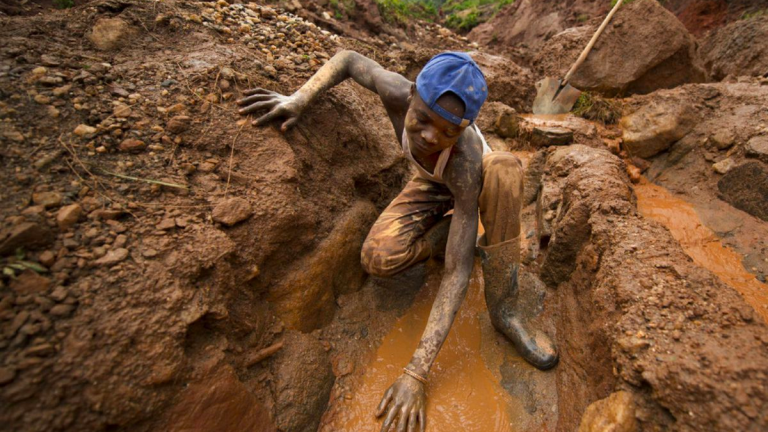 Imagine a boy who has just been given birth to, finding himself 2-5 years later on a field mining rocks that would be sold out and eventually be used to make the mobile phones and computers you are using to read this article. Yes, that and many more is what is happening in Congo, and also responsible for why a lot of us are tweeting or talking about #CongoisBleeding.

From the trending #CongoisBleeding, it changed to #NoCongoNoPhone. However, the 2 hashtags are being used concurrently. Congo is among the top countries for mining Coltan, a dull black metallic ore, whose extracts are used to manufacture tantalum capacitors which are used for mobile phones, personal computers, automotive electronics, and cameras.

But the silence about this issue even though the news is ‘everywhere’ is alarming.

USA, UK, France, are among the countries are part of the reason for what is happening in Congo. This has gone on for quite a while and certain that this is the reason for the cry-out. The outcome of this may not be a good press for these countries and one can only imagine how these countries would respond because it will go a long way in either alleviating the issue on ground or escalating it.

What are people saying?

Couldn’t agree more with the above statements. Africa, for a long time have been a source of raw materials for those countries. The validity of this story seeks confirmation and one only wonders why this has been kept hidden for such a long time or so.

The #NoCongoNoPhone call is from concerned citizens of Congo to other countries to seek help in solving the problem looming in the country. And like too many other African countries, Congo is going through probably its worst times in recent years, as a lot of lives have been lost.

Congo must have lost a lot of blood in the past few years and the cry for blood donors from other countries seem to fall on deaf ears. It seems no one is ready to offer the first aid required.

Congo, from what can be observed by the tweets of concerned persons have been suffering from a silent holocaust. This is not the first time writing on this matter, check here.

When we begin to drill down on matters like this, you see an ingrained level of wickedness that makes you wonder why the world is set up as it is. Slavery, domination, exploitation, has put the world in a state of imbalance and it is only normal for people to cry out. It might take years, but that ‘crying out’ will happen.

Stop the exploitation because no child should be made to do what capable people with stronger hands can do. The story making rounds is that children are being exploited for cheap labour, which is an outright disregard for human life.

The countries exploiting should own up and make the mining process an actual job for citizens of the country. If possible, set up most of their companies in Congo ensuring that the people of Congo are trained and are skilful in producing these mobile phones or other electronic devices. Whatever gain it is these countries are getting from the way they operate at the moment, it is only a matter of time before things get out of hand and the loss will be much more than the present gains.

Citizens of Congo should speak up. This is already happening but it should go beyond social media. The path for this change might be difficult but it has to be done, else we are all just clanging cymbals making noise with no traction to the action we are to carry out. This has to stop. The injustice around the world needs to stop. Exploitation happens when we begin to see each other without the respect that is due. It will not be far from the truth to discover that there are Congolese people aiding and abetting this form of exploitation. And that’s the sad part. That is where the problem is. Congolese need to respect fellow citizens. If the nation is divided, then all our shout will be vain and that’s not the goal.

Coltan (short for columbite–tantalites and known industrially as tantalite) is a dull black metallic ore from which are extracted the elements niobium and tantalum. The niobium-dominant mineral in coltan is columbite (after niobium’s original American name columbium), and the tantalum-dominant mineral is the tantalite. Tantalum from coltan is used to manufacture tantalum capacitors which are used for mobile phones, personal computers, automotive electronics, and cameras. Coltan mining has financed serious conflict in the Democratic Republic of Congo, including the Ituri conflict and the Second Congo War.

Certain countries rich in natural resources have been said to suffer from the apparently paradoxical “resource curse” – showing worse economic development than countries with fewer resources. In Congo‘s case, this can possibly be explained by historical and modern invasion and colonization, which prevents the Congolese from implementing a balanced and sustained development. Wealth of resources may also correspond to “… the likelihood of weak democratic development, corruption, and civil war”. High levels of corruption lead to great political instability, because whoever controls the assets (usually the political leaders and the government, in the case of the Democratic Republic of the Congo) can use them for their own benefit. The resources generate wealth, which the leaders use to stay in power “… either through legal means, or coercive ones (e.g. funding militias)”. The increased importance of coltan in electronics “occurred as warlords and armies in the eastern Congo converted artisanal mining operations … into slave labour regimes to earn hard currency to finance their militias,” as one anthropological study put it. When much of eastern Congo came under the control of Rwandan forces in the 1990s, Rwanda suddenly became a major exporter of coltan, benefiting from the weakness of the Congolese government. The soaring price “brought in as much as $20 million a month to rebel groups” and other factions trading coltan mined in northeastern Congo, according to a U.N. report. (Source: Wikipedia)

Could Congo be their undoing?

For Congolese, mining is the readiest source of income, because the work is consistently available, even if only for a dollar a day. The work can be laborious; miners can walk for days into the forest to reach the ore, scratch it from the earth with hand tools and pan it. About 90% of young men in Congo do this. Research found that many Congolese leave farming because they need money quickly and cannot wait for crops to grow. Farming also presents its own obstacles. For example, the lack of roads in the Congolese interior makes it extremely difficult to transport produce to market and a harvest can be seized by militias or the military. With their food gone, people resort to mining to survive. But organized mines may be run by corrupt groups such as militias. The Congolese mine coltan with few tools, no safety procedures, and often no mining experience. No government aid or intervention is available in many unethical and abusive circumstances. Miners consider coltan mining a way to provide for themselves in the face of widespread war and conflict and a government that has no concern for their welfare.

So the question remains, are the Congolese fighting other countries to be free from the exploitation or is it an internal affair?