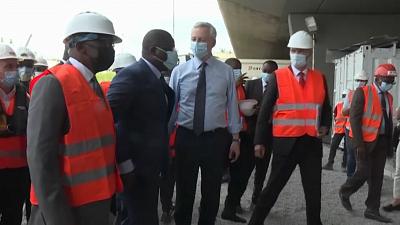 Minister of Economy and Finance in France, Bruno Le Maire, in a visit to a portion of the future route of the Abidjan metro and the reconstruction site of the Felix Houphouet Boigny bridge, has disclosed his country’s support in the construction – Africa News reports

The construction has been entrusted to a group of companies led by the French company Bouygues for 1.36 billion euros.

“The cost is still under discussion, I cannot give you a precise figure. But Ivory Coast knows that it can count on France’s financial support to help it carry out a number of infrastructure projects that are essential to its economic development” said Bruno Le Maire, French Economy Minister.

The Kenyan Government has said on Thursday, 29th April, that it had told the United Nations it will shut some refugees camps holding over 430,000 refugees by June 2022 – Reuters Africa reports

The announcement was made by the Interior Ministry via a tweet about five weeks after ordering the closure of the Dadaab and Kakuma refugee camps and giving the United Nations two weeks to present a plan to carry this out.

Charewa ruled that section 31 of the Criminal Code used to charge Chin’ono, is no longer part of Zimbabwean law.

The judge set aside a decision by a Harare magistrate to place the journalist, who was arrested on January 9 for tweeting that a police officer had allegedly beaten an infant to death while enforcing Covid-19 lockdown regulations, in custody.

Uganda’s Health Ministry, in announcing this, stated that this should serve as a wake-up call as they urged citizens to continue exercising safety measures.

The ministry has also initiated a civil action against some health providers abusing the scheme and is also contemplating striking the alleged culprits with criminal charges.