Y! For Africa Focused on Emerging Leaders and Culture Shapers
Home 54° Across Africa Probing the policemen beating Kenyan lawmaker and other news around Africa 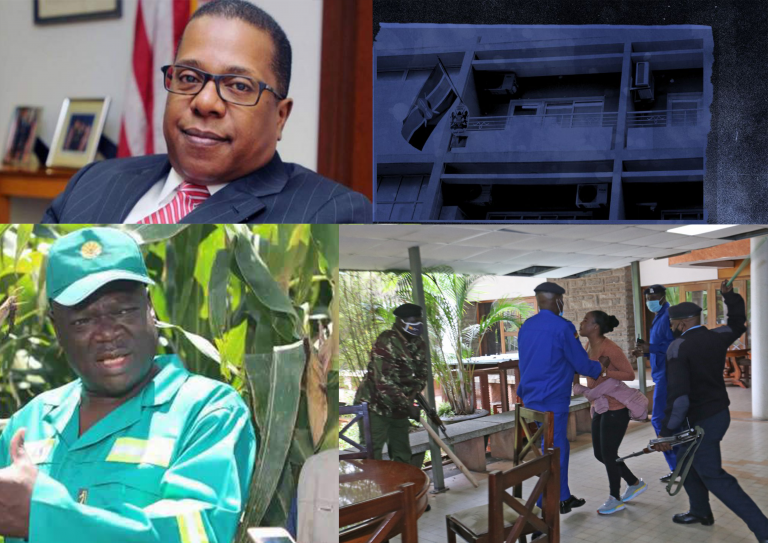 The police were deployed to the Nairobi County Assembly to disperse lawmakers who had tried to impeach the Speaker amid chaotic scenes, according to local media.

A standoff between the police and lawmakers ensued and the four police officers were pictured assaulting local representative Patricia Mutheu.

The country’s police watchdog said it had “contacted some of the people who were present during the chaos” to get testimonies.

“The preliminary enquiry seeks to establish the role played by police officers who were deployed at the premise,” it said in a statement.

The local affiliate of Amnesty International has called on the police officers to be held accountable.

Zimbabwe’s Agriculture Minister Perrance Shiri has died, according to an announcement by President Emmerson Mnangagwa.

The 65-year-old minister died at a private hospital in the capital, Harare, according to local media.

The minister’s driver is reported to have recently succumbed to Covid-19.

President Mnangagwa eulogised the minister as “a true patriot, who devoted his life to the liberation, independence and service of his country”.

Zimbabwe’s agriculture minister and retired military general Perrance Shiri, whose death was announced on Wednesday, played a key role in the country’s massacre in the early 1980s.

The killings in South-Western Zimbabwe were ordered by former President Robert Mugabe in a crackdown against his opponents.Up to 20,000 civilians are feared to have died.

Mr Shiri was the commander of the feared fifth brigade, a North Korean trained crack unit, that was responsible for the operation.

The US government has summoned Zimbabwe’s ambassador to explain comments made about its envoy by the country’s ruling party.

A spokesperson of Zimbabwe’s ruling party, Zanu-PF, had on Monday accused the US of sponsoring anti-government protests in the country and called the US ambassador Brian Nichols a “thug”.

The Assistant Secretary for the State Department’s Bureau of African Affairs Tibor Nagy termed the comments as “deeply offensive”, adding that the Zimbabwe envoy had been summoned to explain.

The chairman of US Senate Foreign Relations Committee Jim Risch tweeted that Zimbabwe was using “name calling, deflection and misinformation to justify their current economic and political crisis”.

Ambassador Nichols has had several disagreements with the Zimbabwean government.

Zimbabwe’s foreign affairs minister in November 2019 threatened to expel the ambassador accusing him of “behaving and conducting himself like an opposition member”.

The country has been protesting against US sanctions and the embassy has been on the receiving end.

Covered by CNN ‘As equals’ Kenyan women in Lebanon are reporting what they face when they interact with the Consul in Lebanon.

The women complained that they are overcharged and it only happens to women.

But the Consul General said denying allegations of overcharging women for their repatriation, Jaber said that the consulate adheres to Lebanon’s standard repatriation procedures. The diplomatic mission, he said, receives money from Kenyan women while the women and Kenyan diplomats are at Lebanon’s immigration services, giving the sums directly to the country’s authorities.

Immigration officials receive money for a migrant worker’s penalties only after they have cleared legal hurdles for her repatriation. This normally happens days before the migrant departs to their country.

That process, Jaber said, meant that the women could not have been overcharged by the consulate.

However, CNN has seen receipts in the names of Kenyan women for money they say was paid to the consulate. Gloria’s $1,500 sum was paid in two installments in September 2019, according to the receipts, two months before the confrontation at the consulate.

When I read this, one thing came to mind. It’s possible the Kenyan consul could have behaved differently to different women thus making it difficult for most of the testimonies of him charging some women more believable.