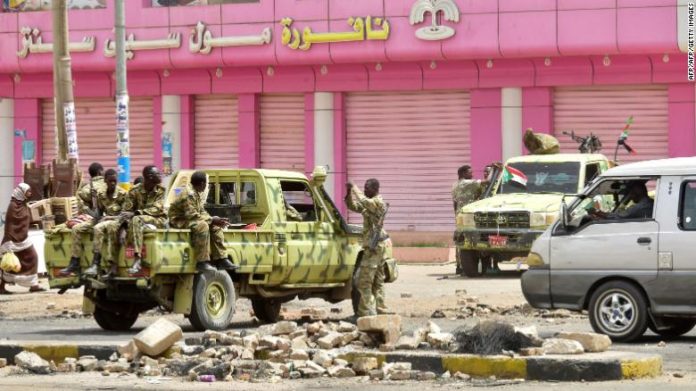 The Sudanese army have used barbed wire and concrete to stop people from reaching its headquarters in the capital, Khartoum.

Go deeper: More than 100 people were killed on June 3 last year, when the army attacked and cleared a protest camp opposite the army headquarters.

The pro-democracy protesters had been there for weeks, demanding a quick transition to civilian rule after the ousting of president Omar al Bashir in April last year by a Transitional Military Council.

In deference to lockdown rules, a South African high court in Pretoria ruled Tuesday, that “the regulations are not rationally connected to the objectives of slowing the rate of infection or limiting the spread thereof“.

The case was filed by a community group, Liberty Fighters Network, who challenged the government’s response measures announced by President Cyril Ramaphosa.

Go deeper: The country has some of the most stringent coronavirus containment measures in the world. It eased a month-long lockdown on May 1 after dropping the alert level from level 5 to level 4, and to level 3 on 1 June.

The cabinet has said it will “review, amend and republish the regulations” but that the measures will remain in place “for now“, according to a statement.

‘‘Now, we are working on finalising our investigation and checking the content and process of the report for actuality and neutrality.

Go deeper: Amnesty had released a report on Friday saying that 39 people were shot dead by security forces in Oromia regional state in 2019. The report also highlighted the alleged role of security forces in inter-communal violence in Amhara state, north-west Ethiopia, where it says local militia and vigilantes joined forces to kill at least 100 people.

Health officials in Mozambique report adverse behaviour towards people suspected of being infected with coronavirus.

In the central city of Beira, there are reports that those infected have been threatened with lynching.

This led to a fall in the number of people going to clinics to report flu-like symptoms.

Go deeper: Africa has not fully grasped the fact that discrimination on the basis of a disease (or any other reason) can lead to the death of the patient. Till date, the continent still records high levels of discrimination against HIV patients, the mentally ill, people with cancer. The coronavirus has joined the list; a concern Africa needs to address.

Four people have died from a fresh Ebola outbreak in the Democratic Republic of Congo, amid struggles to stop the spread of the coronavirus.

The new cases were in western city of Mbandaka, which has a population of about a million people. It is more than 1,000km (about 600 miles) from the centre of the current outbreak in the east of the country.

Backstory: The Ebola epidemic in the country’s east has killed over 2,200 people since August 2018 – officials had hoped to be able to proclaim the end of the epidemic by June 25.