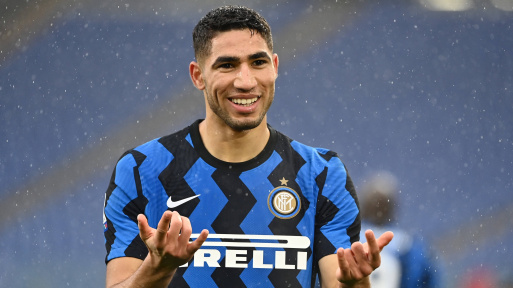 The star player in his Instagram post, captioned it “Big Win, Gran Victoria”, as he celebrated Sunday’s win in the Serie A game against Verona FC.

Though Achraf Hakimi wasn’t the scorer of the goal that landed his team the win against Verona, he came through with outstanding energy that helped assist the only goal securing the win.

Achraf is undoubtedly a great player on the field and he is also known for outstanding assists that help his team in the long run. However, for yesterday’s game, Achraf did try to land a score in the first eighteen minutes into the game when he shot a long-range from outside of the box. An effort that was countered by Marco Silvestri.

Achraf’s skills and efforts on yesterday’s game was undeniably incredible as he made several attempts at assisting all of which was intercepted by Verona’s defence. During the entirety of the game, Achraf Hakimi was on for seventy-nine minutes, with an 85% success pass rate before being replaced with another teammate.  He also had fifty-four touches on the ball.

In another post on social media, the player encouraged his fans with more photos of himself as he captioned “believe in yourself” in the Instagram post.

It’s barely been a year since Achraf Hakimi signed a five-year contract with Inter Milan and he has been giving his best to assist his team in coming out as champions in the Serie A.

Hakimi was also listed on Y! Africa’s most inspiring youths on the continent.