Y! For Africa Focused on Emerging Leaders and Culture Shapers
Home Uncategorized Overambitious and underserved: what FESTAC 77 must teach us 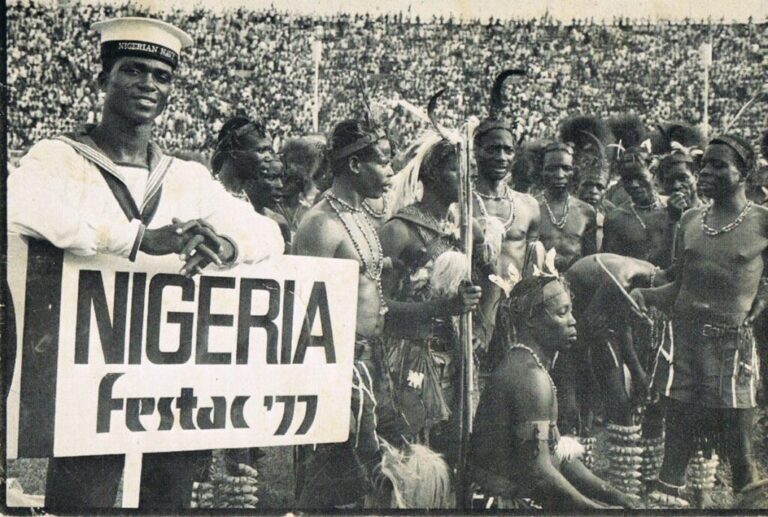 Forty-three years ago, Nigeria and the United Nations Educational Scientific and Cultural Organization(UNESCO) collaborated to host the second edition of the World Black and African Festival of Arts and Culture. The year was 1977, and Nigeria played host to a celebration of pan-African proportions, receiving over 17,000 participants across all of Africa’s countries and the black diaspora. As a host country, Nigeria luxuriating in its newfound oil wealth, under the administration of a savvy military-led president, Olusegun Obasanjo, left no stone unturned.

An estate named after the festival of arts and culture(FESTAC) was created with 10,773 housing units to accommodate the attendees. A multipurpose theatre along with exhibition halls, conference halls, and cinema halls were built. At its time, FESTAC 77 was the largest black gathering ever held.

There were other nonphysical changes that also took place. FESTAC 77’s objective was “to provide a forum for the focusing of attention on the enormous richness and diversity of African contributions to world culture and the opportunity for recounting the achievements of their ancestors”. In Nigeria, the festival led to the creation of the Nigerian National Arts Theatre, the National Council for Arts and Culture and the formation of Nigeria’s first cultural policy which are all institutions and policies that remain in place to date.

Simply put, the stakes were immense. According to Uchenna Ikonne, FESTAC 77 was a strong indicator of Nigeria’s growing position in global culture. It was also a way for the country “to demonstrate the worthiness of its nickname, the “giant of Africa.” In 1977 Nigeria had managed to emerge from nearly fifteen years of schizophrenic political leadership under the military, featuring multiple coups, and civil war. The oil boom that lasted a decade saw Nigeria’s foreign exchange reserves spike dramatically upwards, washing the country in wealth. It was the rare avenue where political social and economic forces aligned in the pursuit and execution of a united vision. FESTAC 77 was at once specific and universal. It fit into the values of Pan Africanism which was deeply connected to the larger movements of Negritude in Francophone Africa and the Black Power movement in the United States of America. Nigeria turned itself into one of the earliest centrifugal homes in the reach for global black consciousness.

It was not all perfect. Criticisms were levied, much of which concerned the $400 million budget deemed to be excessive. Afrobeat pioneer Fela Kuti also declined to be in attendance, calling the endeavour a joke. The aftermath of FESTAC 77 was also a big disappointment. Nigeria fell into poverty not long after, and government participation in cultural development went down. In Ikonne’s words, “The National Arts theatre-the pride of modern Nigeria-fell into disuse and disrepair…FESTAC 77 is remembered largely for rampant graft, cynicism, brutality and destruction – that is in the rare instances that it is remembered at all.”

For all of its glories and faults, FESTAC 77 remains an important historical marker. For a brief shining moment, Nigeria showed the world what it was capable of culturally. Unfortunately, conceptually, FESTAC 77 aimed too high too quickly, and it failed to follow up on many of its promises. However, viewing the resurgence and increasing dominance of African cultural expression, it is important to assess the past and take some lessons away for the future.

Today, the atmosphere seems ripe for another alignment of socioeconomic and political forces in the pursuit of African cultural excellence. Across Nigeria, but particularly Lagos, there has been a rapid transformation in the creative arts and larger cultural sector. In just two decades, since democracy allowed for less conservative media, achievements in the sector have scaled to inspire new avenues for the celebration of African arts and culture.

Much of this has been accomplished by private individuals and organizations. But sometimes, the government has also offered support. Funded initiatives like the World Bank and federal government GEM scheme and the more recent creative industry finance initiative give entrepreneurs in the arts access to finance and resources to develop their businesses. Under former Lagos state governor Akinwunmi Ambode, there were deliberate efforts to support the efforts of the private sector in turning Lagos into the uncontested centre of the African cultural renaissance.

Ultimately, Nigeria has made serious strides, and will continue to do so. However, it is not quite ready for an event on the scale of FESTAC 77. The country simply still lacks the institutional and infrastructural support to ensure that an event of such a scale is not followed up by bloated expenditures and lingering regret.

If FESTAC 77 led the creation of state organizations devoted to culture, we must understand that the job of making Lagos a sustainable nexus of African soft power lies in the hands of many players, spread across many industries. It is not enough just for fairs and festivals and galleries and recording contracts to flourish, we must also re-examine the political and social systems that can improve or hinder these efforts.  Dr. Tunji Azeez, Department of Theatre Arts and Music, Lagos State University, told Guardian Arts, “Our museums are not funded to attract people. So, there are so many opportunities that can bring in more money than oil is currently doing if only the government is serious about investing in the future.”

Since the publication of Nigeria’s cultural policy, it has not been revised to better suit the needs of a world that has embraced globalization and the internet. The law must also be embraced to favour us, in order to negotiate equal terms for African artists making the leap to global consciousness. It is a common point of discomfort that intellectual property rights are not established well enough to protect Nigerians in the culture space. There is also the problem of data collection, to help in making better policy decisions.

Limited avenues for communication between the government and private individuals and organizations interested in cultural development, also engender a landscape where many efforts to support arts and culture are low risk and designed for the appearance of progress rather than actual progress. The most recent example is the commitment of $500 million dollars to revive NTA,  a national television network with an outdated purpose.

However, the time is approaching fast and the signs are there. For inspiration, we can look to Ghana where $1.9 billion dollars of revenue from its year of return initiative, as a model. Such amalgamations of music, arts and tourism may not resurrect the glory of historical events like FESTAC 77, but they will be profitable in the long run. They will also be a timely and effective face-lift for Nigeria’s global perception, within the context of the renewed interest in black culture globally. We’re already witnessing this happen in real-time with the rise of Afropop as a mainstream sound.

Corporate investment can be another anchor and accelerator for long-term sustainability in the arts and culture sector. Toye Sokunbi, founder of new media platform, ARTISH who has extensive experience in corporate partnerships for art exhibitions and music festivals believes the private investment is the next frontier for cultural expansion at scale. “In the last decade or so, there hasn’t been a bigger spender in the media like big corporations. TV shows like Big Brother Nigeria and Project Fame have literally created instant celebrities out of nowhere with that kind of investment”, he says.

According to Sokunbi, the same goes for big-budget music concerts and festivals. “From big events of the old days like Star Mega Jam, Kennis Music Easter Fiesta to more modern events like NATIVELAND, Flytime Music Festival or any big concert you see in December with a famous international act. Private funding has provided an avenue for an entire ecosystem of creators and platform owners to experiment, try new things and re-invest” he added.

Dr Azeez believes another way the country can continue to establish dominance as Africa’s cultural centre is through regulatory laws. “Right now, Nigeria is a dumping ground for all manner of content from Europe, America and Asia. Without a rejig of our policies, we cannot tap from our arts, culture and entertainment industries,” he says.

His sentiments on supporting local creators reflect some of the criticism for Beyonce’s recently released Black is King, film project. Though it shined a seminal light on a diverse collection of creatives from fashion to cinematography to production (most of whom are Lagos based), the magnanimity of Beyonce’s brand also obscured the works of those she collaborated with.

In this regard to support local content creators, many have been optimistic about the entry of American streaming giant, Netflix, into Nollywood. Since the media tech company began operations in Nigeria, it has produced its first original African series and inked multiple distribution deals with Nigerian production companies. However, government intervention is still required in this landscape for Nigerian filmmakers to reap the full benefits of such a major player on the landscape. For context, Netflix African Originals’ team led by Dorothy Ghettuba is currently stationed in Amsterdam. This is a far-cry from how the company established presence in France earlier this year with national policy-backed initiatives to support the French film and TV industries, through scholarships, funding and programs targeted at filmmakers from disadvantaged communities.

If Nigeria will host ambitious festivals in the near future,  the ecosystem for such endeavours to thrive must also receive equal attention. The ministry of culture was merged with the ministry of information in 2015, which should allow for a smoother mix of information and communication technology with culture. Yet the Murtala Muhammed International Airport, Lagos is odorous and run by uniformed officers who regularly demand bribes. Lagos is also estimated to run on nine hours of power a day, a problem that’s only compounded for tourism when you add state-wide rising insecurity. To compare once again, Ghana has a world-class airport, better roads and constant electricity.

Unfashionable work is necessary for growth and development in the cultural sector.  Perhaps, in the future, when the state is strong enough, we can then create another juggernaut festival.